CARACAS, Venezuela — Venezuelan President Nicolas Maduro is expected to win a second six-year term in Sunday’s election, despite a deepening crisis that’s made food scarce and inflation soar as oil production in the once wealthy nation plummets.

More than 1 million Venezuelans have abandoned their country for a better life abroad in recent years, while those staying behind wait in line for hours to buy subsidized food and withdraw cash that’s almost impossible to find.

While polls show Venezuelans overwhelmingly blame Maduro for their mounting troubles, he’s still heavily favored to win thanks to a boycott of the election by his main rivals amid huge distrust of the nation’s electoral council, which is controlled by government loyalists.

Maduro, setting an example for government supporters who he called on to vote early, cast his ballot in Caracas shortly after fireworks and loud speakers blasting a military hymn roused Venezuelans from sleep around 5 a.m. local time.

He said Venezuelans would provide an example of democracy to the world and brushed back suggestions he was taking the country down an authoritarian path.

“It’s offensive when they say the Venezuelan people are falling under dictatorship,” he said after voting, adding that if he were to win the election he would seek an understanding with his opponents on a way forward for the crisis-wracked country. “I’m going to stubbornly and obsessively insist in dialogue for peace.”

READ NEXT: Venezuelans suffer deadly scarcity of food and medicine

On Friday, the Trump administration added Diosdado Cabello, a key Maduro ally, to a growing list of top officials targeted by financial sanctions, accusing the socialist party boss of drug trafficking and embezzlement.

Maduro’s main rival, independent candidate Henri Falcon, has faced the dual challenge of running against a powerful incumbent while trying to convince skeptical Venezuelans to defy the boycott called by the main opposition coalition.

Blasting Maduro as the “candidate of hunger,” he has campaigned on a promise to dollarize wages pulverized by five-digit inflation, accept humanitarian aid and seek assistance from the International Monetary Fund — all proposals Maduro has rejected as tantamount to surrendering to the U.S. “empire.”

“I swear that I will liberate Venezuela from this dictatorship,” Falcon shouted to supporters at his final campaign rally Thursday in his home city of Barquisimeto. “I swear it in the name of God.” 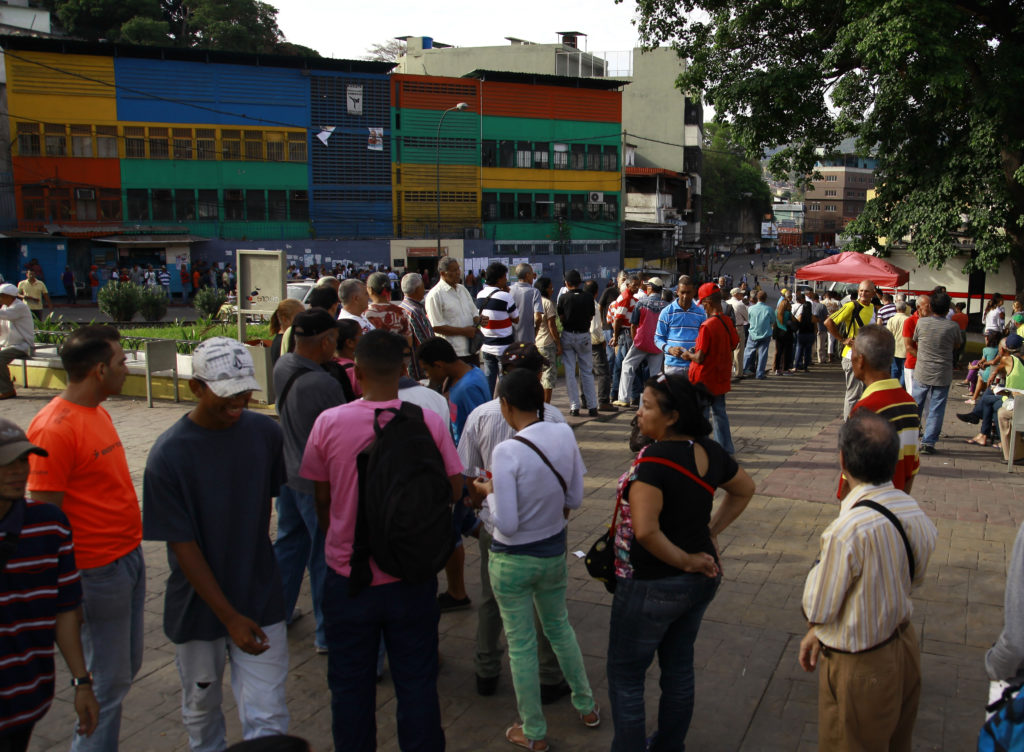 Venezuelan citizens wait to vote at a polling station during the presidential election in Caracas, Venezuela, May 20, 2018. Photo by Adriana Loureiro Fernandez/Reuters

Also on the ballot is television evangelist Javier Bertucci, who has cut into Falcon’s support by providing free soup at rallies.

On Sunday, festive revolutionary music played as a few dozen voters stood in a long line to flash their so-called “fatherland cards” to socialist party volunteers.

A woman wearing the red, yellow and blue colors of Venezuela’s flag scanned each card with her phone —a form of verifying that cardholders had done their patriotic duty of voting, presumably for President Nicolas Maduro.

The existence of so-called “Red Points,” many just a few steps from voting centers, is an integral part of the government’s get out the vote machinery.

“If the opposition wants to do the same, they are free to do so,” said Rigoberto Barazarte, the owner of a small car wash business who wants to see a re-elected Maduro toughen his stance against elites he says are trying to sabotage Venezuela’s economy.

But in the opposition stronghold of eastern Caracas, the leafy streets were largely empty.

Around 80 percent of Venezuelans believe Maduro has done a bad job, yet turnout is expected to be the lowest since Chavez was elected in 1998, with only 34 percent saying they are certain they will vote, according to recent polling by Datanalisis.

The election has drawn broad criticism since some of Maduro’s most-popular rivals were barred from running, and several more were forced into exile. Echoing the views of Venezuela’s tattered opposition movement, the United States, European Union and many Latin American countries have already said they won’t recognize the results.

In addition, pressure tactics honed in past campaigns have kicked into overdrive, further tilting the playing field in Maduro’s favor.

Almost 75 percent of households said they received government-issued food boxes in the past three months, according to Datanalisis, and Maduro on the stump has promised that the 16.5 million holders of the fledgling “fatherland card” will be rewarded for their vote. Just to be sure, so-called “red points” will be set up outside voting centers checking peoples’ cards, which are needed to access social programs.

“This is neither a competitive or democratic election, and the result may not reflect the preference and decision of the voters,” said Luis Vicente Leon, president of Datanalisis.

Still, some question the wisdom of not competing in an election, even if it is widely seen as rigged.

A 2010 study by the Brookings Institution covering 171 electoral boycotts around the world — from Afghanistan to Zimbabwe — found that such maneuvers rarely succeed in rendering elections illegitimate in the eyes of the world. Instead, the boycotting party usually emerges weaker and the incumbent empowered.

Javier Corrales, a Venezuela expert at Amherst College, said the opposition’s sit-out strategy could be as disastrous as its boycott of congressional elections in 2005, which led the ruling party to sweep all seats and pass legislation removing presidential term limits that further strengthened Chavez.

“The irony is that this is the least democratic election of all but it’s also the best chance the opposition has ever had,” said Corrales. “If Maduro wins by a large margin, he’ll take it is as a green light to continue radicalizing and moving in the direction of completely destroying the private sector.”

Left: Venezuela's President Nicolas Maduro casts his vote at a polling station, during the presidential election in Caracas, Venezuela May 20, 2018. Photo by Carlos Garcia Rawlins/Reuters