Your guide to the election in troubled Venezuela

Venezuelan President Nicolas Maduro is expected to win a second six-year term on Sunday, despite the country’s plunging economy and food shortages. Countries in the region along with the U.S. are calling the election “illegitimate.”

Critics say the snap election, which was moved from December to this Sunday, is faulty because of the government’s firm grip on all branches, including the Electoral Council. Venezuela’s main opposition coalition plans to boycott the election.

Where does the situation in Venezuela stand leading up to Sunday’s elections and where will it go from there? We spoke to several analysts.

Venezuela’s reliance on oil revenues caused its economy to tank when oil prices dropped in 2016. The U.S. issued sanctions against Venezuela last year after Maduro’s government moved to rewrite the constitution to consolidate more powers. To try to circumvent the sanctions, Venezuela became the first government to issue its own cryptocurrency, called the petro, in March.

This week, cereal manufacturer Kellogg was the latest U.S. company to leave the nation of 31 million, citing its “deterioration.” The Venezuelan government took over the plant in the north-central city of Maracay and re-opened it just a day later.

Watch a 2017 report on Venezuela’s food shortages and runaway inflation.

Why is Maduro expected to win?

Despite Venezuela’s troubles and increasing isolation, “It would be very surprising if Maduro doesn’t win re-election,” said Michael Shifter, president of the Inter-American Dialogue. “There is simply too much at stake for him and his ruling clique. Their vast wealth and power would be at risk.”

The government controls the army, courts and media, along with the Electoral Council, which has cancelled the registration of many parties, Shifter said.

“The playing field is far from level,” he said. “The conditions in Venezuela today do not meet minimal criteria for a free and fair election.” 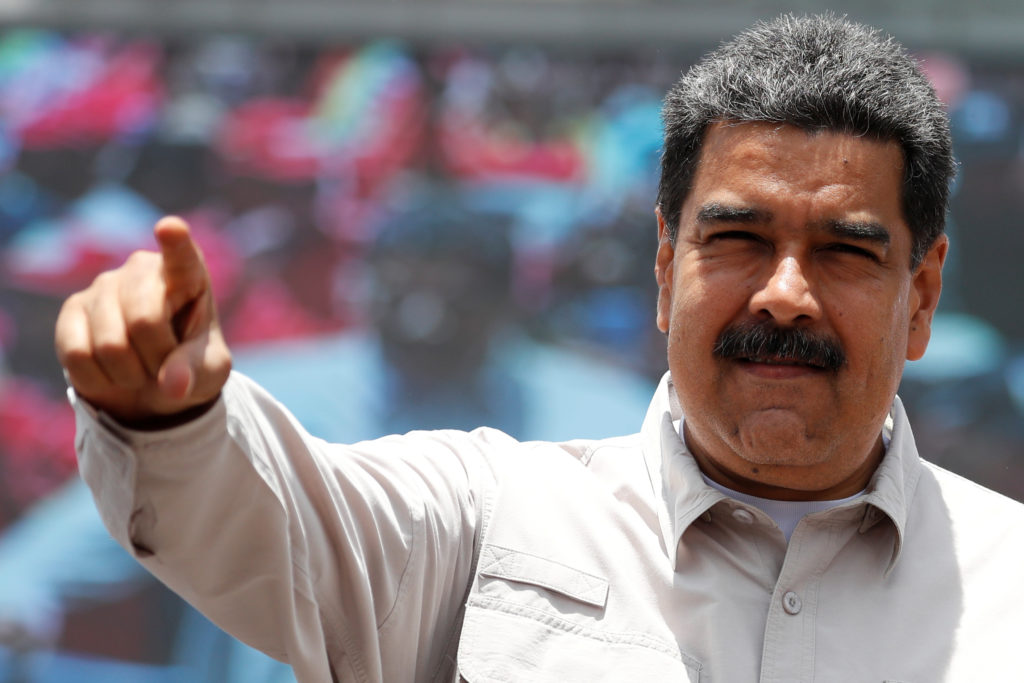 Venezuela’s President Nicolas Maduro at a campaign rally in Charallave, Venezuela, on May 15. File photo by Carlos Garcia Rawlins/Reuters

The leading opposition figures are barred from running for “arbitrary reasons,” he continued, and those who are left are disorganized. “Another advantage (for Maduro) is a weak and divided opposition that lacks leadership and a clear political strategy,” he said.

Who are Maduro’s main rivals?

Henri Falcon, a retired soldier and former mayor and governor, who is a member of the Progressive Advance party, is considered the top opposition candidate. Falcon has said he would welcome aid from other countries, which Venezuela now blocks, and would stop subsidizing its neighbors with oil shipments.

Falcon’s chief proposal is to dollarize the economy, or extensively use foreign currency alongside domestic currency, “which he believes is the best way to bring down runaway inflation, today estimated at 13,000 percent,” Shifter said. “Hyperinflation is hitting poorest Venezuelans the hardest.” 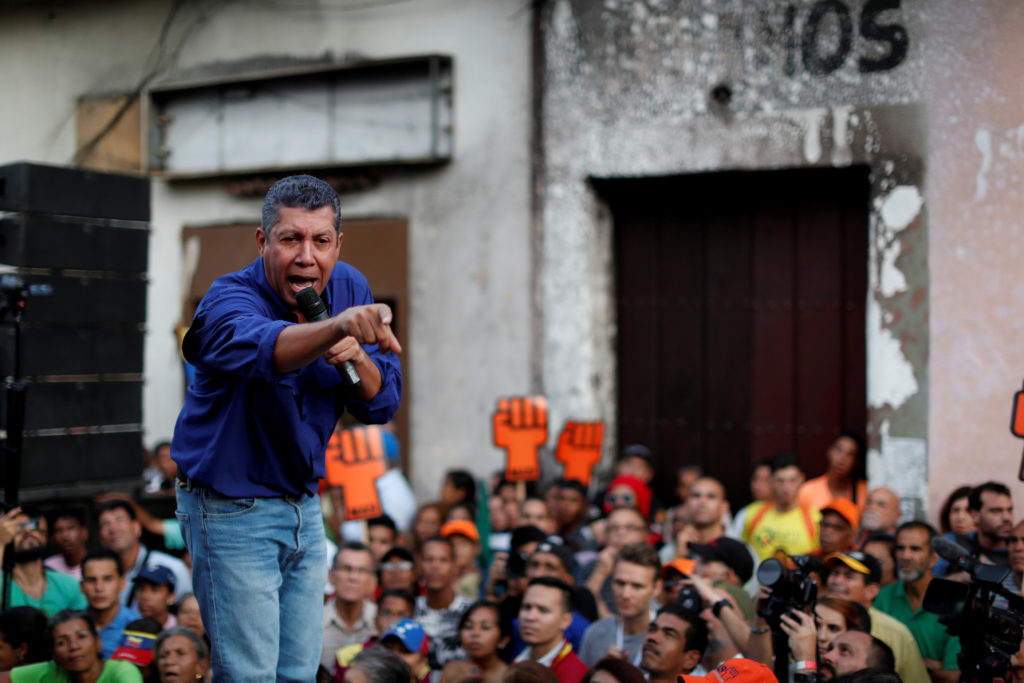 Venezuelan presidential candidate Henri Falcon of the Avanzada Progresista party at a campaign rally in Caracas on May 14. File photo by Carlos Garcia Rawlins/Reuters

A third presidential candidate, businessman and evangelical pastor Javier Bertucci, who is a member of the Esperanza por el Cambio party, called himself “the light among the darkness” when he entered the race in January and promised to implement “Christian values.” His name appeared in leaked tax haven documents known as the Panama Papers, but he has denied any wrongdoing, saying he lacked the resources to open such an account.

Local pollster Datanalisis puts Falcon ahead of Maduro by about 10 points, but the poll also shows fewer people planning to vote than in previous elections.

Many people do not trust the electoral authorities and, therefore, are dissuaded from voting, explained Michael Penfold, professor of political economy and governance at the Venezuelan business school Instituto de Estudios Superiores de Administracion.

Also working against Falcon, in addition to possible low voter turnout: He has not received the endorsement of other opposition leaders, who still plan to boycott the election, and many opposition voters do not trust him because they feel he is still working with the government, said Risa Grais-Targow of the Eurasia Group.

Maduro, a member of the United Socialist Party of Venezuela, enjoys the support of Turkey’s President Recep Tayyip Erdogan and retired Argentine soccer star Diego Maradona. “I have faith you will be triumphant,” Erdogan said Thursday.

If Maduro wins, he will remain vulnerable to even his supporters because the vote would further international isolation and the possibility of more sanctions from European Union countries, Grais-Targow said. Growing shortages of water and electricity also could prompt more protests and social unrest, she said.

A Maduro victory would mean regime continuity, but also political and economic instability because of hyperinflation and shrinking investment, Penfold said. “If you don’t stabilize the economy, the ability also of reconstructing the oil sector is going to be extremely difficult because basically international oil operators with the sanctions that we have in place cannot invest,” he said. “You cannot run an oil economy without accessing international markets and financing markets.”

A Maduro victory would mean regime continuity, but also political and economic instability because of hyperinflation and shrinking investment.

Maduro is in power “because the military supports him,” and because of that support, Venezuela’s civil society and political elites are weak, said Margarita Lopez Maya, visiting fellow and researcher at Tulane University.

The only strong social organization left is the church, which makes it difficult for other groups outside the government to try to solve problems within the country, Penfold said. “It’s going to require a very high degree of cooperation and common vision on substantive ideas.”

Once re-elected, Maduro “may try to call for dialogue and the formation of a national unity government, but given the failure of previous dialogue efforts, his renewed appeals will not be credible,” Shifter said. “Unfortunately, for a nation suffering an unspeakable tragedy, the situation is likely to get worse before it gets better.”