TORONTO (AP) — A man clad in black fired a handgun into restaurants and cafes in a lively Toronto neighborhood, killing a 10-year-old girl and an 18-year-old woman and wounding 13 others in an attack that has shaken the confidence of many in the normally safe city.

Authorities identified the suspect as Faisal Hussain, 29, of Toronto, who died after an exchange of gunfire with police. It was not immediately clear whether he killed himself or was killed by police.

The mass shooting in Toronto came just three months after a van struck and killed 10 people in an apparent attack directed toward women.

Police Chief Mark Saunders said he would not speculate on a motive but did not rule out terrorism.

“It’s almost inconceivable that these things can happen,” said Mayor John Tory. “We were so used to living in a city where these things didn’t happen and as we saw them going on in the world around us (we) thought they couldn’t happen here.”

“This is an attack against innocent families and our entire city.”

The slain 18-year-old was identified as Reese Fallon, a recent high school graduate who volunteered for Canada’s Liberal party and was due to attend McMaster University in the fall. Her family said in a statement they were devastated.

“She was … smart, passionate and full of energy. It is a huge loss,” said Canadian Member of Parliament Nathaniel Erskine-Smith, who knew Fallon.

Flags at Toronto City Hall as well as at Fallon’s former high school, Malvern CI, and at school board buildings were lowered to half-staff.

” An engaging student, Reese Fallon graduated from Malvern CI just last month and was highly regarded by staff and loved by her friends,” the school board said in a statement, adding that support was being offered to students.

The 13 wounded ranged in age from 10 to 59, and suffered injuries ranging from serious to minor, Saunders said. He did not name the victims, who included eight women and girls, and seven men.

Dr. Najma Ahmed of St. Michael’s Hospital said five patients had been admitted in serious or critical condition and that three of the five underwent immediate lifesaving operations.

A video taken by a witness showed a man dressed all in black walking quickly down a sidewalk and firing three shots into at least one shop or restaurant in Toronto’s Greektown, a residential area crowded with Greek restaurants and cafes.

Witnesses heard many shots and described the suspect walking past restaurants and cafes and patios on both sides of the street and firing into them.

Ontario’s police watchdog said there was an exchange of gunfire between the assailant and two officers on a side street before the gunman was found dead near Danforth Avenue where the shootings occurred..

A spokeswoman for the Special Investigations Unit, Monica Hudon, said an autopsy would be performed Tuesday on the suspect.

Det.-Sgt. Terry Browne said police had sought a search warrant for an address related to the suspect but didn’t say where.

Tanya Wilson was closing her tattoo shop on the street when she heard gunshots and a mother and her son ran into her store with gunshot wounds to their legs.

“They said they were walking and a man told them to get the hell out his way and he just shot them,” Wilson said.

Wilson said she tied and elevated their wounds and tried to keep them calm while they waited for paramedics. She locked the door and shut off the lights, not knowing what was happening outside. 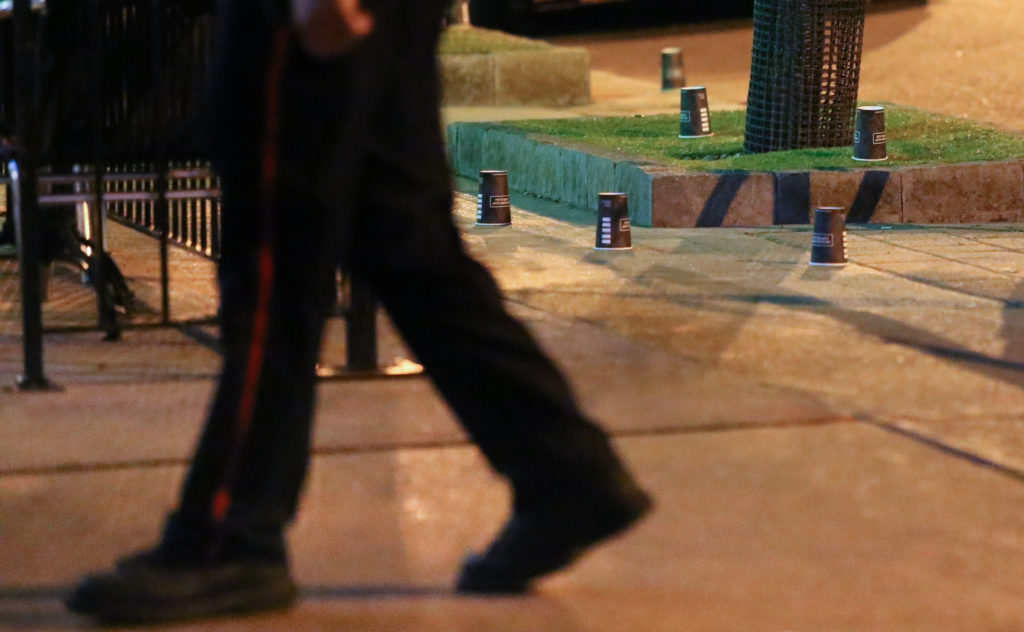 A police officer walks past evidence marked with coffee cups after a mass shooting in Toronto, Canada. Photo by Chris Helgren/Reuters

Jody Steinhauer was celebrating her birthday with family at Christina’s restaurant on Danforth Avenue when they heard 10 to 15 shots. They ran to the back to the restaurant and hid under a table.

“We heard a woman yell, ‘Help!’ My partner went outside the restaurant and the woman was right there. She had been shot,” she said.

Her boyfriend and a doctor who was in the restaurant attended to the woman who was shot in the thigh. “She was screaming and yelling and in shock. Nobody was with her. That was the scary part,” Steinhauer said.

Police, paramedics and other first responders descended on the scene, while people, some in their pajamas, emerged from their homes to see what was happening.

Though mass shootings are rare in Canada’s largest city, Toronto police had deployed dozens of additional officers over the weekend to deal with a recent rise in gun violence in the city, which has seen 23 gun homicides so far this year, compared to 16 fatal shootings in the first half of 2017.

Toronto Councilor Paula Fletcher said the attack was “not gang related” and that the gunman shot “indiscriminately” into restaurants and into a park.

“I know we always say, ‘That can’t happen here,’ when we see those gunmen in the States doing the same thing and it has happened here now,” Fletcher said.

Ontario Premier Doug Ford said the confidence that Toronto is a safe city had been shaken. Toronto has long prided itself as being one of the safest big cities in the world.

Prime Minister Justin Trudeau tweeted: “The people of Toronto are strong, resilient and brave — and we’ll be there to support you through this difficult time.”

In April, the driver of a van plowed into pedestrians on a Toronto sidewalk, killing 10 people and injuring 14. Authorities have not disclosed a motive, but said the arrested driver, Alek Minassian, posted a message on social media referencing a misogynistic online community before the attack.

A now-deleted Facebook post indicated anger toward women and saluted Elliot Rodger, a community college student who killed six people and wounded 13 in shooting and stabbing attacks near the University of California, Santa Barbara, in 2014.

“The Incel Rebellion has already begun!” read the post, using the term incel to refer to “involuntarily celibate.”

Meanwhile, Ottawa police arrested a 24-year-old man with a knife on Monday during the Changing of the Guard on Parliament Hill in Ottawa. No one was injured. It was unclear if the incident was related to the mass shooting in Toronto.

Associated Press writer Jennifer Peltz in in New York contributed to this report.

Left: Police are seen near the scene of a mass shooting in Toronto, Canada. Photo by Chris Helgren/Reuters

The challenge of preventing mass shootings through mental health records