LAMPEDUSA, Sicily — The German captain of a humanitarian rescue ship with 40 migrants aboard has been arrested after she rammed her vessel into an Italian border police motorboat while docking at a tiny Mediterranean island Saturday in defiance of Italy’s anti-migrant interior minister.

Jeering onlookers shouted “handcuffs, handcuffs” as Carola Rackete, the 31-year-old captain, was escorted off the boat at Lampedusa, which is closer to north Africa than to the Italian mainland.

The migrants, meanwhile, hugged personnel of the German Sea-Watch charity who helped them during their 17 days at sea. Some kissed the ground after disembarking from Sea-Watch 3 at dawn’s break. 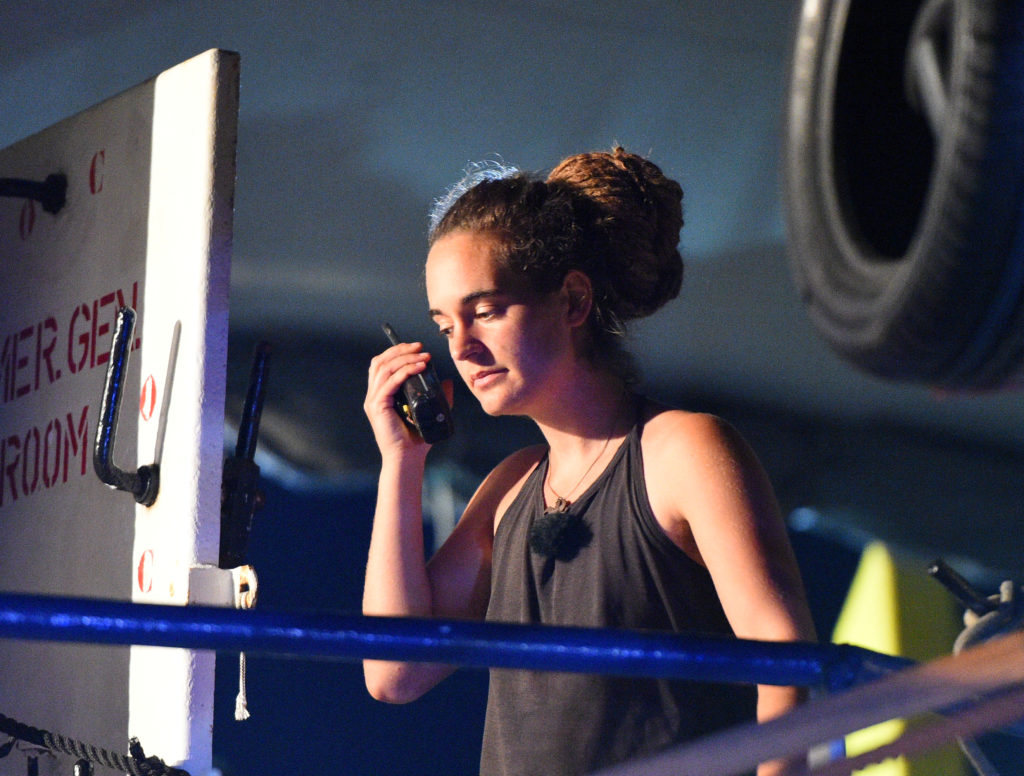 Carola Rackete, the 31-year-old Sea-Watch 3 captain, is seen onboard the ship as it docks in Lampedusa, Italy June 29, 2019. Photo By Guglielmo Mangiapane/Reuters

The migrants had been rescued from an unseaworthy vessel launched by Libya-based human traffickers but Italian Interior Minister Matteo Salvini had refused to let them disembark on Lampedusa until other European Union countries agreed to take them. Five nations so pledged to do on Friday: Finland, France, Germany, Luxembourg and Portugal.

The humanitarian rescue operation ended dramatically and violently when Rackete decided she could no longer wait for permission to dock given the odyssey of the migrants aboard.

The captain steered her vessel toward the island before dawn, ramming the much smaller police boat, which was blocking Sea-Watch 3’s path to the dock.

In past years, Lampedusa had won international praise for its generous welcome to many of the hundreds of thousands of rescued migrants.

But even as the migrants’ numbers dwindled as Italy cracked down on private rescue ships, many Italians lost patience, including economic migrants ineligible for asylum. Salvini’s anti-migrant League party has soared in popularity.

Some on the island applauded when the migrants disembarked. But another group yelled insults, including “Gypsy, go home” to the captain. A senator from the opposition Democrats, Davide Faraone, filmed the intense scene and then posted it on Twitter.

“You must handcuff her immediately,” a woman shouted before Rackete was hustled into a police car.

Her lawyer, Leonardo Marino, told Italian state TV that she was arrested for investigation of resisting a warship, a reference to plowing into the motorboat of the customs and border police force. No one was injured but the motorboat’s side was damaged. If convicted, Rackete risks up to 10 years in prison. 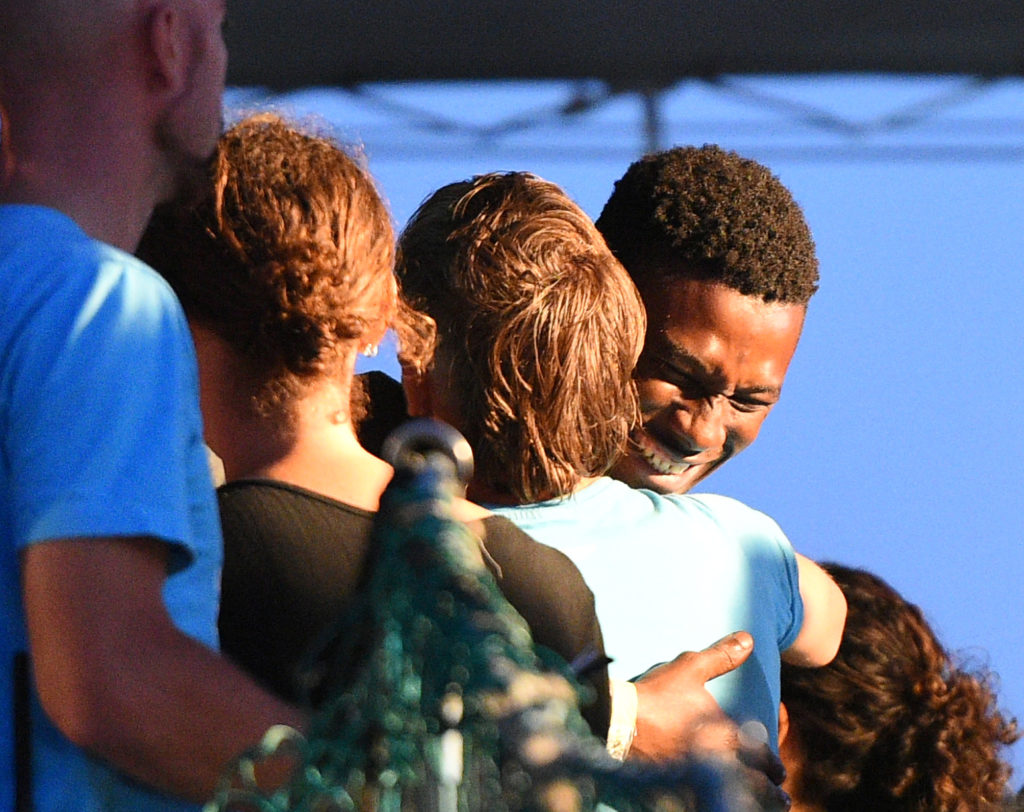 A migrant hugs a crew member as they disembark from the Sea-Watch 3 rescue ship in Lampedusa, Italy June 29, 2019. REUTERS/Guglielmo Mangiapane /Reuters

She also risks a fine as high as 50,000 euros ($58,000) under a recent Salvini-backed law cracking down on private rescue vessels. Any fine might be covered by a reported 100,000 euros supporters in Italy recently donated to help Sea-Watch.

Salvini slammed the captain’s defiance, branding her actions as tantamount to an “act of war.”

“I have asked for the arrest of an outlaw who put (lives) at risk,” Salvini told RAI state radio. He also ordered that authorities sequester the ship, “which went around the Mediterranean breaking laws.”

Sea-Watch defended Rackete’s actions. “She enforced the rights of the rescued people to be disembarked to a place of safety,” Sea-Watch said in a statement.

But a Sicily-based prosecutor, Luigi Patronaggio, indicated otherwise. “Humanitarian reasons cannot justify inadmissible acts against those who work at sea for the safety of everybody,” ANSA quoted the prosecutor as saying.

“Saving lives is a humanitarian duty,” he said on Twitter. “Rescue at sea must not be criminalized. It’s up to the Italian justice system to swiftly resolve the allegations.”

A judge will decide after closed-door hearings in coming days whether Rackete should be freed or stay under house arrest while the investigation continues.

Among those backing the captain’s conduct was a leader of Germany’s Green party, Robert Habeck.

“The arrest of Captain Rackete shows the nefariousness of the Italian government and the dilemma of European refugee policy,” he told German media group RND. “The real scandal is the drownings in the Mediterranean, the lack of legal pathways to flee and the absence of a European distribution mechanism.”

His outrage was echoed by the head of Germany’s Protestant Church, Heinrich Bedford-Strohm.

“A young woman is arrested in a European country because she saved human lives and wanted to bring the rescued people to land safely,” he said in a statement. “(This is) a disgrace for Europe!”

Democratic Party lawmaker Graziano Delrio, after disembarking himself, likened her actions to that of a driver of a Red Cross ambulance “which goes through a red light” to speed ailing patients to a hospital.

Sea-Watch 3 had rescued 53 people on June 12, but later 13 of the migrants were taken to Italy for medical care.

After reaching Italy following rescue at sea, migrants are transferred to centers where they can file initial asylum request documentation. Even if their asylum bids failed, many migrants manage to stay in the country or try to make their way to northern Europe where many have relatives.

The overwhelming majority of the migrants’ home countries don’t have repatriation agreements with Italy, meaning even if their asylum bids are rebuffed, Italy can’t expel them, despite Salvini’s pledges.

Left: The Sea-Watch 3 rescue ship leaves after migrants disembarked at the port in Lampedusa, Italy June 29, 2019. Photo By Guglielmo Mangiapane/Reuters