Clouds of tear gas swirled and stun grenades thundered across the stone-paved esplanade as masses of worshippers skirmished with police in the worst bout of fighting at the contested holy site in months.

The clashes came amid heightened tensions between Israel and the Palestinians, just days after an Israeli soldier was killed south of Jerusalem. On Saturday, Israeli troops killed four Palestinian militants who attempted to cross the Gaza border fence.

Tens of thousands of Muslims had flocked to the site in Jerusalem’s Old City early Sunday for holiday prayers, police said. Jews are also observing on Sunday the Ninth of Av, a day of fasting and mourning for the destruction of the two Biblical temples which stood at the site in antiquity.

The site is the holiest for Jews and the third holiest for Muslims, after Mecca and Medina in Saudi Arabia, and has long been a flashpoint at the epicenter of the Israeli-Palestinian conflict. 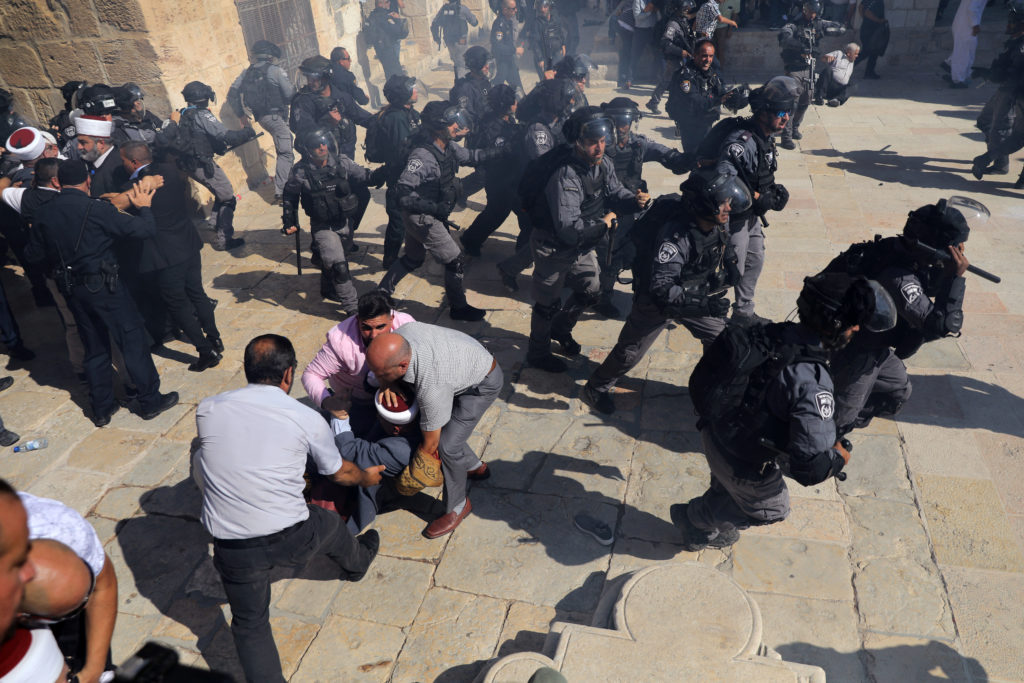 Israeli police clash with Palestinian worshippers on the compound known to Muslims as Noble Sanctuary and to Jews as Temple Mount as Muslims mark Eid al-Adha, in Jerusalem’s Old City August 11, 2019. Photo by Ammar Awad/Reuters

Jordan, which serves as the custodian of the holy site, said in a statement that it had sent a formal complaint to Israel and condemned what it called Israel’s “irresponsible provocations.” Sufian al-Qudah, a spokesman for the Jordanian Foreign Ministry, said Amman holds Israel completely responsible for the violence.

Large numbers of Palestinians had gathered at the gates of the compound early Sunday after rumors circulated that police would allow Jewish visitors to enter the site. The protesters chanted “Allahu Akbar” (God is greatest) and threw stones at police, who then charged into the compound while firing stun grenades and rubber-coated bullets.

Israeli police had initially barred entry to Jewish visitors, but reversed their decision after the clashes broke out and allowed them to enter. Several dozen entered the site under close police escort and Muslim worshippers began throwing chairs and other objects at the group. The Jewish visitors left the compound shortly thereafter.

Jerusalem District police commander Doron Yedid told Israeli media that the decision to allow Jewish visitors to enter the site was made “with the backing of the top political officials.” Police spokesmen could not be reached for comment.

The reversal came after Israeli Prime Minister Benjamin Netanyahu’s religious nationalist allies called for the site to be opened to Jewish visitors. Israelis are headed to unprecedented repeat elections next month after Netanyahu failed to form a government following April’s elections.

Jews are barred from praying at the compound under a longstanding arrangement between Israel and Muslim authorities. Jewish tradition also maintains that Jews should avoid entering the holy site.

But in recent years Israeli religious nationalists have stepped up visits to the site to challenge the arrangement. Jewish extremists have called for destroying the mosque and rebuilding the Biblical temple.

The Palestinians view such visits as provocations, and have long feared that Israel intends to take over the site or partition it. The Israeli government has repeatedly said it has no intention of changing the status quo.

Hanan Ashrawi, a senior leader in the Palestine Liberation Organization, said Israel was “fueling religious tensions in Jerusalem,” adding that Israeli officials are “fully responsible for its grave consequences.”

Israeli-Palestinian tensions have spiked following President Donald Trump’s decision in 2017 to recognize Jerusalem as Israel’s capital and move the U.S. Embassy there. The Israeli-Palestinian peace process has been moribund for at least a decade, and the Palestinians have cut ties with the Trump administration over what they see as its unfair bias toward Israel.

In a separate incident on Sunday, Israeli troops killed a Palestinian gunman after he opened fire on them from across the perimeter fence around the Gaza Strip.

The Israeli military said an “armed terrorist” approached the frontier early Sunday and opened fire toward troops on the other side, who responded by shooting at the attacker. The army said a tank also targeted a nearby military post operated by the Islamic militant group Hamas.

The Palestinian Health Ministry in Gaza identified the deceased as 26-year-old Marwan Nasser. It was not clear if he was a member of an armed group, and no one immediately claimed responsibility for the attack.

On Saturday, Israeli troops killed four Palestinian militants who the army said had tried to carry out a cross-border attack. Hamas, which has ruled Gaza since 2007, said the attack was an “individual act” carried out by youths frustrated at the Israeli-Egyptian blockade on Gaza and was not planned by the group.

Left: Stun grenades explode as Israeli police clash with Palestinian worshippers on the compound known to Muslims as Noble Sanctuary and to Jews as Temple Mount as Muslims mark Eid al-Adha, in Jerusalem's Old City August 11, 2019. Photo by Ammar Awad/Reuters