New Zealanders pray together one week after mosque attacks

CHRISTCHURCH, New Zealand — New Zealanders observed the Muslim call to prayer Friday, reflecting on the moment one week ago when 50 worshippers at two Christchurch mosques were slain — an act that an imam told the crowd of thousands had left the country broken-hearted but not broken.

In a day without precedent, people across New Zealand listened to the call to prayer on live broadcasts while thousands, including Prime Minister Jacinda Ardern, gathered in leafy Hagley Park opposite the Al Noor mosque, where 42 people died. “New Zealand mourns with you. We are one,” Ardern said.

The call to prayer was observed at 1:30 p.m., followed by two minutes of silence. Hundreds of Muslim men at the park sat in socks or bare feet. One man in the front row was in a Christchurch Hospital wheelchair. 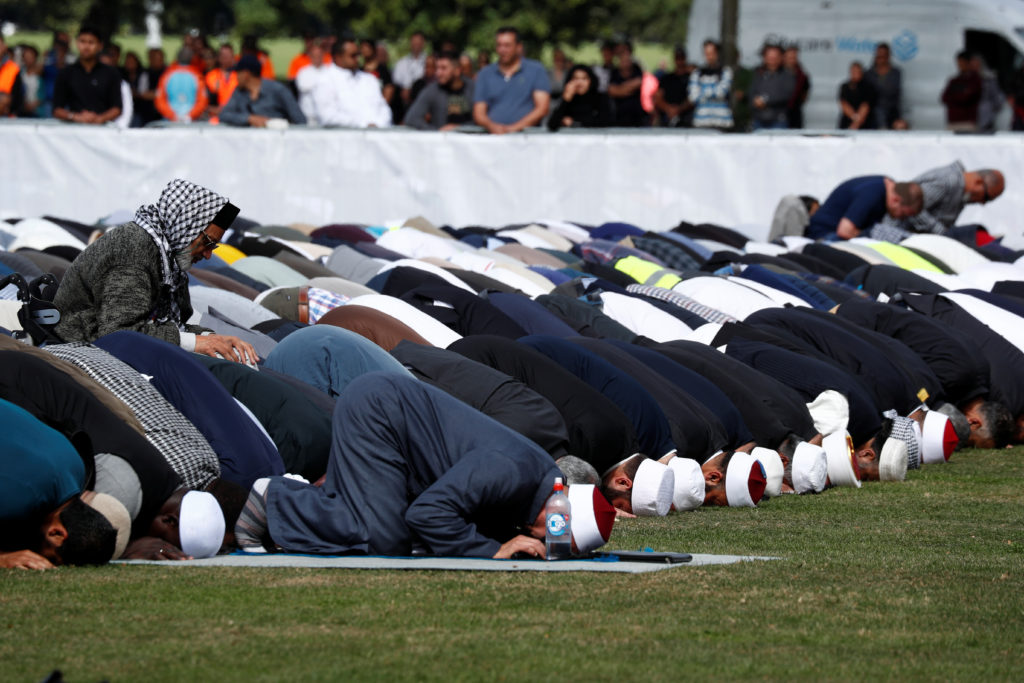 People perform the Friday prayers at Hagley Park outside Al-Noor mosque in Christchurch, New Zealand on March 22, 2019, one week after an attack on two mosques killed dozens of worshippers. Photo by Edgar Su/Reuters

“This terrorist sought to tear our nation apart with an evil ideology. … But, instead, we have shown that New Zealand is unbreakable,” the imam said.

“We are broken-hearted but we are not broken. We are alive. We are together. We are determined to not let anyone divide us,” he added, as the crowd the city estimated at 20,000 people erupted with applause.

Later in the day, a mass funeral was held to bury 26 of the victims at a cemetery where more than a dozen already have been laid to rest. 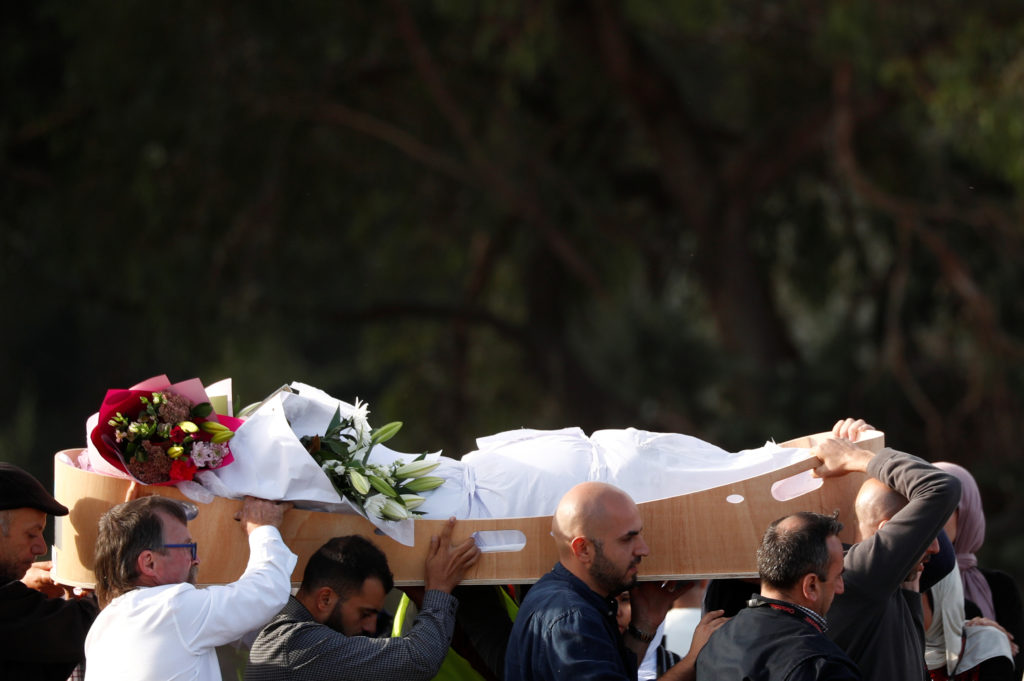 People carry the body of a victim during a burial ceremony for victims of the mosque attacks, at the Memorial Park Cemetery in Christchurch, New Zealand on March 22, 2019. Photo by Edgar Su/Reuters

Christchurch native Fahim Imam, 33, returned to the city for Friday’s service. He moved away three years ago and now lives in Auckland, New Zealand’s largest city.

“It’s just amazing to see how the country and the community have come together — blows my mind, actually,” Imam said before the event.

When he got off the plane Friday morning, he saw someone holding a sign that said “jenaza,” denoting Muslim funeral prayer. He said others were offering free rides to and from the prayer service.

“The moment I landed in Christchurch, I could feel the love here. I’ve never felt more proud to be a Muslim, or a Kiwi for that matter. It makes me really happy to be able to say that I’m a New Zealander,” Imam said.

He called it surreal to see the mosque where he used to pray surrounded by flowers.

The observance comes the day after the government announced a ban on “military-style” semi-automatic firearms and high-capacity magazines like the weapons that were used in last Friday’s attacks at the Al Noor and nearby Linwood mosques.

An immediate sales ban went into effect Thursday to prevent stockpiling, and new laws would be rushed through Parliament that would impose a complete ban on the weapons, Ardern said.

“Every semi-automatic weapon used in the terrorist attack on Friday will be banned,” Ardern said.

The gun legislation is supported not only by Ardern’s liberal Labour Party but also the conservative opposition National Party, so it’s expected to pass into law. New Zealand does not have a constitutional right to bear arms. 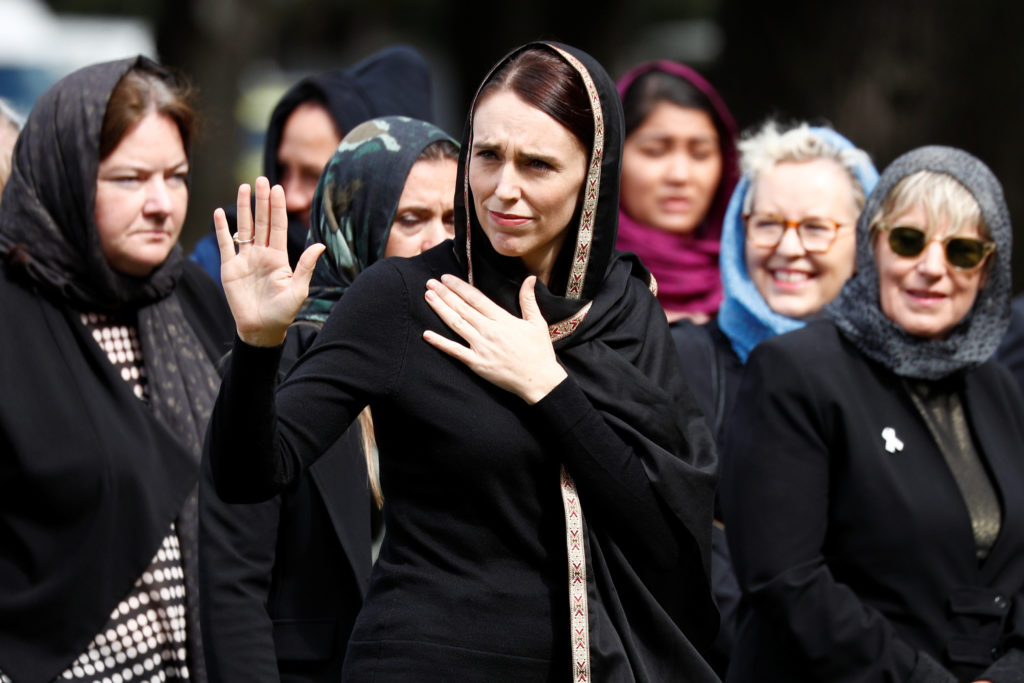 Among those planning to attend Friday’s observance was Samier Dandan, the president of the Lebanese Muslim Association in Sydney and part of a 15-strong delegation of Muslim leaders that had flown to Christchurch.

“It was an ugly act of terrorism that occurred in a beautiful, peaceful city,” Dandan said.

He said his pain couldn’t compare with that of the families he’d been visiting who had lost loves ones. He was inspired by their resilience, he said.

“And I’ve got to give all my respect to the New Zealand prime minister, with her position and her actions, and it speaks loud,” he said.

Ismat Fatimah, 46, said it was sad to look at the Al Noor mosque, which was still surrounded by construction barricades, armed police officers and a huge mound of flowers and messages.

“We’re feeling stronger than before, and we are one,” she said.

She said she prayed for the people who died.

“I’m just imagining what would be happening last Friday,” she said. “People were running around so scared and helpless. It’s just not right.”

Erum Hafeez, 18 said she felt comforted by the overwhelming response from New Zealanders: “We are embraced by the community of New Zealand, we are not left behind and alone.”

The Al Noor mosque’s imam said workers have been toiling feverishly to repair the destruction, some of whom offered their services for free. Fouda expects the mosque to reopen by next week.

Left: People comfort each other before the Friday prayers at Hagley Park outside Al-Noor mosque in Christchurch, New Zealand March 22, 2019. Photo by Edgar Su/Reuters