DETROIT — A rabbi who packs a gun. A church installing security cameras. A police car protecting a mosque.

Houses of worship have traditionally been places of refuge where strangers are welcome. But high-profile attacks in recent years on an African-American church in Charleston, South Carolina, a synagogue in Pittsburgh and now mosques in New Zealand have made many worshippers and their prayer leaders rethink how protected sanctuaries really are.

“People are fearful for their lives, for their houses of worship, for the sanctuary of this mosque and other places of worship like the synagogues and African-American churches that are being attacked. People are concerned,” said Imam Mohannad Hakeem while attending Friday prayers at the Islamic Center of Detroit. 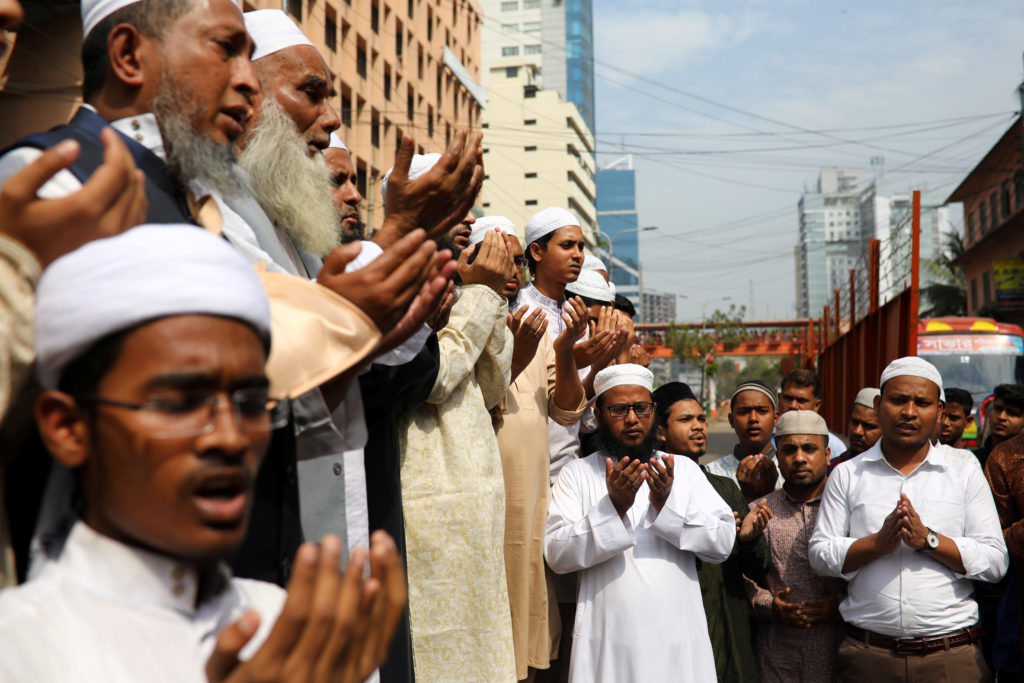 Muslims pray for the victims of Christchurch mosque attack in New Zealand after Friday prayers at the Baitul Mukarram National Mosque in Dhaka, Bangladesh, March 15, 2019. Photo by Mohammad Ponir Hossain/Reuters

He spoke after a horrifying attack in New Zealand left 50 people dead at two mosques during midday prayers. A 28-year-old Australian is the main suspect and called himself in a manifesto a white nationalist out to avenge attacks in Europe by Muslims.

History shows sanctuaries are not immune from violence, as illustrated by bombings at African-American churches during the Civil Rights era. And in countries struggling with sectarian violence, attacks on houses of worship are much more frequent. But for countries at peace, the attacks are much rarer.

For many, houses of worship are sanctuaries where congregants bond with their shared sense of faith and community. The recent attacks have made some question whether houses of worship have turned into soft targets, losing some of their sense of sacredness.

“We pray on one hand, but we’re also armed on the other hand, not in a vigilante way … I hope I’ll never have to use it, but I am ready for any threat that enters my temple. I do feel responsibility.” – Rabbi Yaakov Zucker of Chabad Jewish Center

In the parking lot of the Islamic Center of Detroit Friday, a watchful police officer sat in a squad car, keeping an eye out for any signs of potential trouble. Worshippers thanked the officer — offering him food, drinks, a handshake. Inside, Dearborn Police Chief Ronald Haddad greeted congregants with handshakes and hugs. Dearborn is a Detroit suburb with a large Arab and Muslim population.

Haddad said he doesn’t know if houses of worship are more of a target today than in previous times, but the scale and scope of the attacks in New Zealand clearly attracted his attention.

“Given what happened in New Zealand last night, we want to make sure that our community feels safe and secure,” he said.

In Chicago, the Muslim Community Center and the Downtown Islamic Center increased security during Friday prayers. Several armed police officers stood guard outside and inside throughout the afternoon service.

Dana Al-Qadi, 29, an engineer, was committed to attending after the attacks but said doing so brings her a feeling of peace mixed with fear.

“People are their most vulnerable when they’re at the masjid (mosque). It’s where they bring their worries, their weaknesses, and try to speak to God. They’re in such a vulnerable state of mind and spirit. In that moment, someone decided to be such a transgressor. That brings me so much sadness,” she said.

For many in the Jewish community, last year’s synagogue shooting attack in Pittsburgh sparked a similar sense of vulnerability. 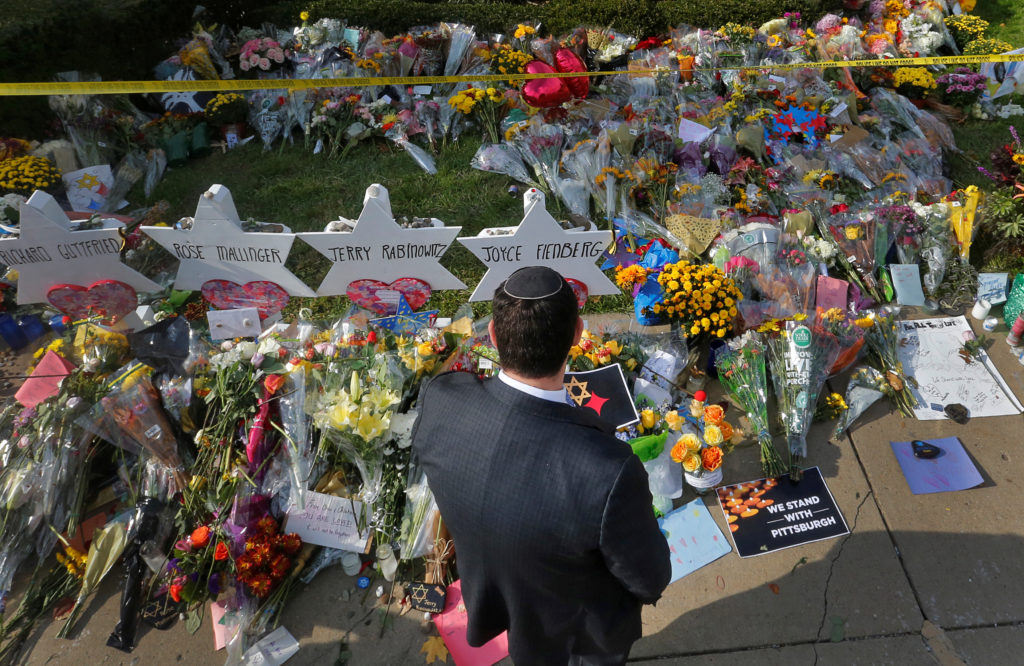 A man prays at a makeshift memorial outside the Tree of Life synagogue following Saturday’s shooting at the synagogue in Pittsburgh, Pennsylvania, U.S., October 31, 2018. Photo by Cathal McNaughton/Reuters

Eleven people died in what was the worst attack on Jews in U.S. history on Oct. 27 when an anti-Semitic truck driver is believed to have spewed his hatred of Jews as he opened fire on the Tree of Life Congregation synagogue. Robert Bowers has pleaded not guilty to counts including using a firearm to commit murder and obstruction of religious exercise resulting in death.

After the attack, Rabbi Yaakov Zucker of Chabad Jewish Center in the small town of Key West started going to target practice along with a handful of congregants.

“We pray on one hand, but we’re also armed on the other hand, not in a vigilante way … I hope I’ll never have to use it, but I am ready for any threat that enters my temple. I do feel responsibility,” he said.

Zucker said he doesn’t have the funds to hire a full-time security guard but makes sure at least one other person at the temple is also armed. After the Pittsburgh attack, he started asking local police to hang out during big events or for holidays and he says they’ve obliged.

He lamented that temples and other places of worship, always seen as places of refuge are now “soft targets” and said he fears copycats after the New Zealand attack.

Jamaal Weathersby, the pastor at New Hope Baptist Church in New Orleans, said the attack was a turning point for his church and others in terms of thinking about their security.

Their church has eight or nine doors, he said, but now people are only allowed through one entrance for services. Security cameras were installed and security agents will be hired for an upcoming revival.

“I think that now the way that people think about church in general whether it is the mosque, synagogue or what have you, it’s not sacred anymore,” he said.

In Jackson, Mississippi, the New Horizon Church International beefed up security after the Charleston shooting, but Bishop Ronnie Crudup said it’s important for the church not lose its open and welcoming environment. 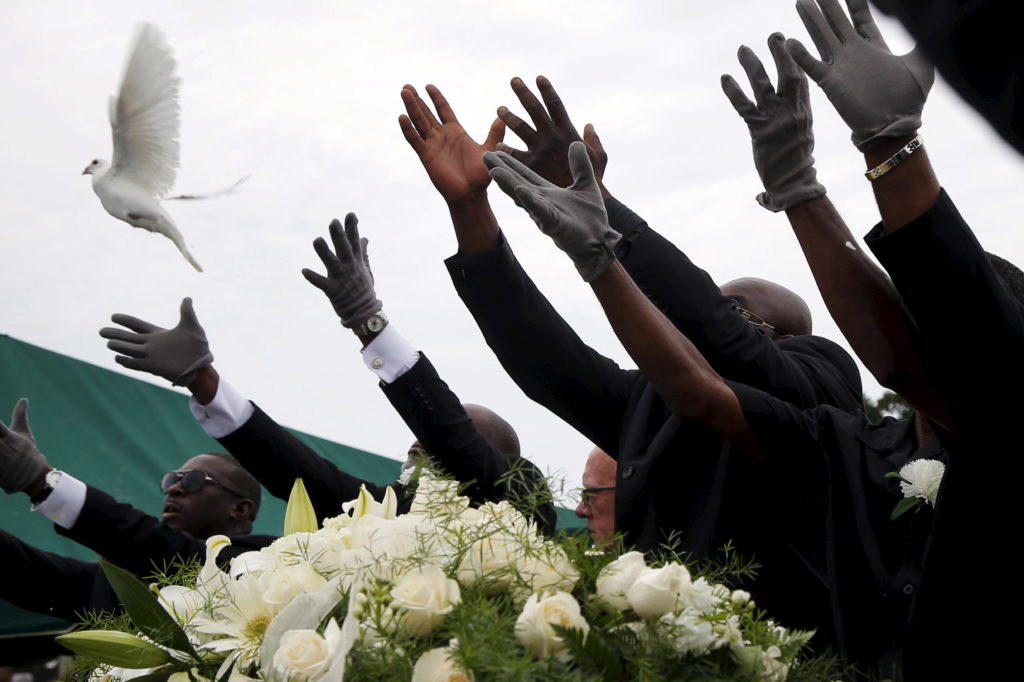 Pall bearers release white doves over the casket of mass shooting victim Ethel Lance as she is buried at the Emanuel African Methodist Episcopal Church cemetery in North Charleston, South Carolina in a June 25, 2015 file photo. While it’s not yet clear what effect the church shooting in Charleston will have on gun purchases, a growing number of African-Americans across the United States have changed their position on firearms in recent years, breaking with a long tradition of gun control advocacy among blacks and embracing the kind of pro-gun positions that have long been more widely held by whites. Photo by Brian Snyder/Reuters

“We seek to not lose ourselves and our own purpose and who we’re supposed to be as we react to the present dilemmas that we’re in,” he said.

Even with heightened security, worshippers said the attacks would not prevent them from gathering together for prayer.

In Chicago at the packed Muslim Community Center on Friday, the imam told his congregants they “cannot be afraid to come to the mosque.”

“If you let things like this stop you from doing this, we’ve given up our lives,” said Ribbler.

Kennedy reported from Plantation, Florida, and Santana reported from New Orleans. Jeff Karoub in Detroit and Noreen Nasir in Chicago contributed to this report.

Left: A man prays inside the Umayyad mosque on Laylat al-Qadr during the last week of the Muslim fasting month of Ramadan, in Damascus, Syria June 12, 2018. Photo by Omar Sanadiki/Reuters