CARACAS, Venezuela — Venezuelan President Nicolas Maduro was sworn in to a second term Thursday amid international calls for him to step down and a devastating economic crisis.

Seventeen Latin American governments, the United States and Canada rejected the legitimacy of Maduro’s next term in a measure adopted Thursday. Most countries from Europe and Latin American didn’t send representatives to the swearing-in.

But Cuba’s President Miguel Diaz-Canel, Bolivian President Evo Morales and President Anatoli Bibilov of a breakaway province of Georgia were among the few foreign leaders who attended the ceremony at the country’s Supreme Court.

In a speech after his swearing-in, Maduro claimed 94 countries had sent representatives to his inauguration. He vowed to continue the legacy of the late President Hugo Chavez and accused the United States of trying to ignite unrest through its increasing economic sanctions.

Maduro’s popularity has plunged amid scarcities, hyperinflation and rising authoritarianism.

“Venezuela is the center of a world war led by the North American imperialists and its allies,” Maduro said. “They have tried to convert a normal inauguration into a world war.”

Maduro’s second term extends Venezuela’s socialist revolution amid widespread complaints that he has stripped Venezuela of its last vestiges of democracy.

Maduro denies that he’s a dictator and often blames President Donald Trump for leading an economic war against Venezuela that’s destroying the country.

The Organization of American States voted not to recognize Maduro’s legitimacy, adopting a resolution Thursday presented by Colombia, Argentina, Brazil, Chile, Costa Rica, the United States, Paraguay and Peru. The move was denounced by Venezuela’s ambassador to the OAS, Samuel Moncada, as “a hostile act … against the will of our nation.”

Paraguay went a step further, cutting diplomatic ties. President Mario Abdo Benitez said his country “in the exercise of its constitutional powers and national sovereignty, adopts the decision to break diplomatic relations with the Bolivarian Republic of Venezuela.”

U.S. Secretary of State Mike Pompeo said in a statement that the United States will keep up pressure in support of the Venezuelan people.

“It is time for Venezuelan leaders to make a choice,” Pompeo said, urging Maduro supporters to be on the right side of history. “Now is the time to convince the Maduro dictatorship that the moment has arrived for democracy to return to Venezuela.”

“Nicolas Maduro today is making a mockery of democracy” Macri said on Twitter. “Venezuelans know it, the world knows it. Venezuela lives under a dictatorship.” 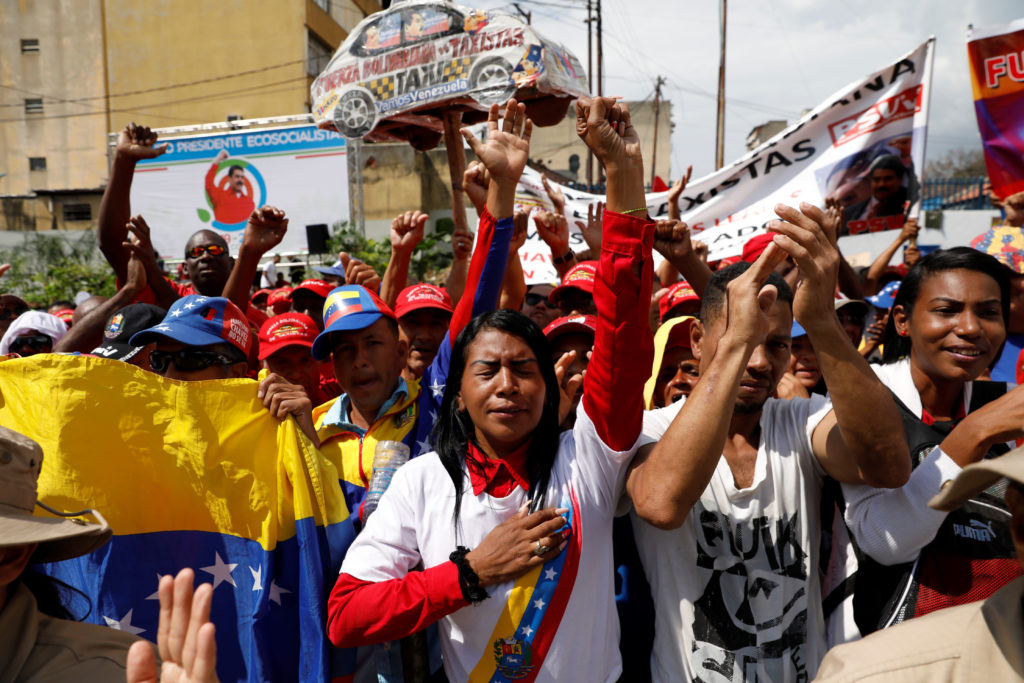 Supporters of Venezuela’s President Nicolas Maduro gather around Supreme Court during his swearing-in ceremony, in Caracas, Venezuela. The president still has his supporters, but his popularity has plummeted as the nation’s economic situation has worsened. Manaure Quintero/Reuters

Oil-rich Venezuela was once among Latin America’s wealthiest nations. It produced 3.5 million barrels of crude daily when Chavez took power. Output now has plummeted to less than a third of that. Critics blame years of rampant corruption and mismanagement of the state-run oil firm PDVSA.

The economic collapse has left the nation of roughly 30 million in the throes of a historic crisis.

An estimated 2.3 million Venezuelans have fled their nation’s hyperinflation, food and medical shortages over the last two years, according to the United Nations. Those remaining live on a monthly minimum wage equal to less than $5 and falling daily.

WATCH: Why Venezuela’s neighbors are facing a huge refugee emergency

Venezuela’s splintered opposition movement has failed to counter the socialist party’s dominance. Maduro’s government has jailed or driven into exile its most popular leaders.

In May, Maduro declared victory in a presidential election that his political opponents and many foreign nations consider illegitimate because popular opponents were banned from running and the largest anti-government parties boycotted the race.

The opposition-led Congress opened its session for the year this week, led by 35-year-old Juan Guaido, who vowed to battle against Maduro. Guaido said Maduro is “usurping the presidency.”

The Trump administration has increased pressure on Maduro through financial sanctions, this week singling out powerful Venezuelan media magnate Raul Gorrin. U.S. banks are also banned from doing business with Venezuela, putting a financial strangle-hold on the cash-strapped country.

“He still has control of the institutions,” Smilde said. “He has the guns. He has the money.”

While Maduro’s popularity has plunged amid scarcities, hyperinflation and rising authoritarianism that have sparked a mass emigration, supporters who receive government subsidies in shantytowns continue to back the man who took over from Chavez.

“It’s not the president’s fault,” said Frances Velazquez, a 43-year-old mother of two who survives on government-subsidized boxes of rice, flour and cooking oil. Velazquez blamed opportunists who drive up the prices of scarce items for making life difficult for families like hers.

He pointed out the irony of living in a nation with the world’s most abundant oil reserves yet having to wait in line overnight to fill three canisters of natural gas to cook at home.

“All that’s left to do is raise your hand to heaven and ask God to help us,” said Bermudez, camped out on a Caracas sidewalk with hundreds of others waiting for gas. “There’s nothing more.”

Left: Venezuela's President Nicolas Maduro is sworn in by Venezuela's Supreme Court President Maikel Moreno, during the ceremonial swearing-in for his second presidential term, at the Supreme Court in Caracas, Venezuela on January 10, 2019. Photo by Carlos Garcia Rawlins/Reuters