ABUJA, Nigeria — Nigeria’s president on Wednesday defended his sweeping win of a second term as free and fair and appealed to a “common love of country” as his top challenger vowed to go to court with allegations of fraud.

President Muhammadu Buhari was declared the clear winner by nearly 4 million votes as citizens of Africa’s largest democracy gave him another chance to tackle gaping corruption, widespread insecurity and an economy limping back from a rare recession.

While many frustrated Nigerians had said they wanted to give someone new a try, Buhari, a former military dictator, profited from his upright reputation in an oil-rich nation weary of politicians enriching themselves instead of the people.

Top opposition candidate Atiku Abubakar, a billionaire former vice president who made campaign promises to “make Nigeria work again,” quickly rejected the result of what he called a “sham election” and said next steps would be revealed shortly.

“Election is not war and should never be seen as a do-or-die affair.”
– President Muhammadu Buhari

As many Nigerians awakened to the win along with the morning prayer, Buhari told colleagues he was “deeply humbled.” He regretted the loss of dozens of lives in “mindless” election-related violence.

“I will like to make a special appeal to my supporters not to gloat or humiliate the opposition,” he said. At a later event certifying his victory, he added to applause: “Election is not war and should never be seen as a do-or-die affair.”

Challenger Abubakar said he would have conceded “within seconds” if the vote had been free and fair. Instead he alleged “manifest and premeditated malpractices” in many of Nigeria’s 36 states.

He asserted that voting was suppressed in his strongholds in the oil-rich south and that states threatened by an extremist insurgency generated unusually high turnouts.

One domestic election observer, the Civic Media Lab, noted that “contrary to normal reasoning” the state most affected by extremist attacks, Borno, saw a 13 percent increase in turnout. Some residents said, however, they were determined to vote despite the threat.

YIAGA Africa, which deployed more than 3,900 observers, said its parallel vote-counting project found official results largely tracked with its own but called on the electoral commission to look into “inconsistent” turnout figures. 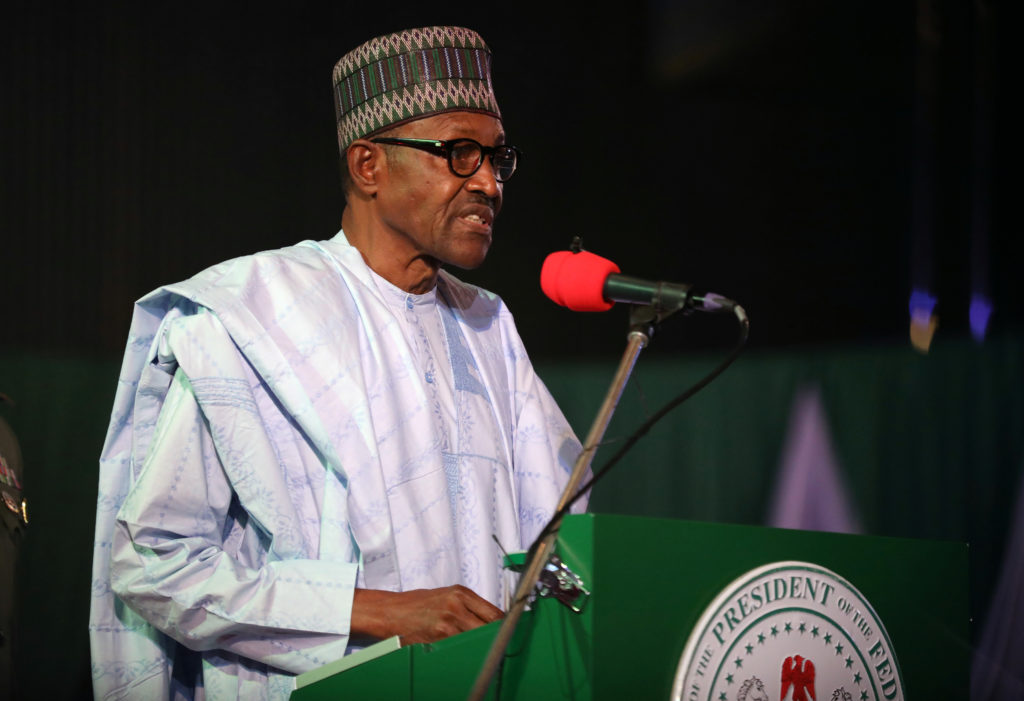 Nigeria’s President Muhammadu Buhari speaks after collecting his certificate from the electoral commission following the poll win in Abuja, Nigeria ON February 27, 2019. Photo by REUTERS

Court challenges are nothing new in Nigeria, where Buhari himself doggedly fought his past election losses for months, in vain. The Supreme Court of Nigeria has never overturned a presidential election, Chris Kwaja, a senior adviser to the United States Institute of Peace, told The Associated Press.

The president’s colleagues had expected a challenge. “There’s no opposition that will roll over and play dead,” Hameed Ali, the ruling party agent attending the vote declaration, told reporters.

Nigeria was peaceful after the winner was announced. Both Buhari and Abubakar are Muslims from the north, avoiding regional tensions in the vast country with a largely Christian south.

Buhari’s supporters danced in the streets and clung to speeding vehicles in a perilous display of exuberance.

“He is a man of integrity,” a Buhari supporter in the northern city of Kano, Mohammed Aliyu, said as jubilant people held up four fingers to mark the new term. “He is the only leader in Nigeria today that does not accumulate wealth.”

“The rigging was so obvious,” said one Abubakar supporter in Kano, John Orerere. “You cannot expect someone to be smiling after robbing him of his hard-earned result,” said Anthony Chigbo, a political activist in southeastern Anambra state.

But a civil rights activist, Musa Babn Iya, asserted that Nigerians were not interested in going to court but instead were thinking about “how to get out of this hardship” of simply getting by.

Buhari’s party rejected Abubakar’s allegations of manipulation of results and called on Abubakar to accept his loss gracefully. British Prime Minister Theresa May and the leaders of Kenya, Ghana, Senegal and Niger sent their congratulations to Buhari.

The election, once described as too close to call, suffered from a surprise weeklong postponement and significant delays in the opening of polling stations. While observers called the process generally peaceful, at least 53 people were killed in an attack claimed by the Islamic State West Africa Province extremist group and other violence, analysis unit SBM Intelligence said.

A former U.S. ambassador to Nigeria, John Campbell, has said the troubled election gives the candidates grounds to go to the courts.

Many Nigerians have prayed for peace during the unexpectedly drawn-out election process. Some spoke approvingly of the 2015 vote, when President Goodluck Jonathan took the unprecedented step of conceding to Buhari before official results were announced. It was the first defeat of an incumbent president by the opposition in the country’s history.

Now Nigerians, who have been praised for their patience and resilience in this bumpy vote, are settling in for a legal fight.