The vote, widely seen as too close to call, also was marred by hours-long delays at polling stations across the vast West African country. Polls closed in many areas, although voting continued in units that opened late. Preliminary results are expected in about two to four days, according to observers.

Nigerian security authorities openly acknowledged an extremist attack in the northeast city of Maiduguri shortly before voting began on Saturday. Boko Haram extremists “attempted to infiltrate” the state capital by launching artillery fire, likely to disrupt the elections, said a statement by Borno state police. Nigerian security forces earlier Saturday said the blasts had been their own in a show of force to deter extremists.

“Some missiles strayed into vulnerable locations” but there were no casualties and the extremists retreated, said the new statement. However, a security official said one soldier was killed and four wounded. The official insisted on anonymity because he was not authorized to speak to the press.

The army also confirmed a “futile” attack on a security outpost in Geidam in Yobe state. Voting turnout appeared to be light as authorities tried to calm panicked, skeptical residents.

Gunfire also was heard in Port Harcourt in Nigeria’s restive south, where the military presence was heavier than in past elections. One convoy in Delta state contained more than 25 vehicles with battle-ready soldiers. Later in the day, soldiers in Rivers state fired on suspected ballot snatchers, with four people arrested.

The attacks did not stop voting across Nigeria. 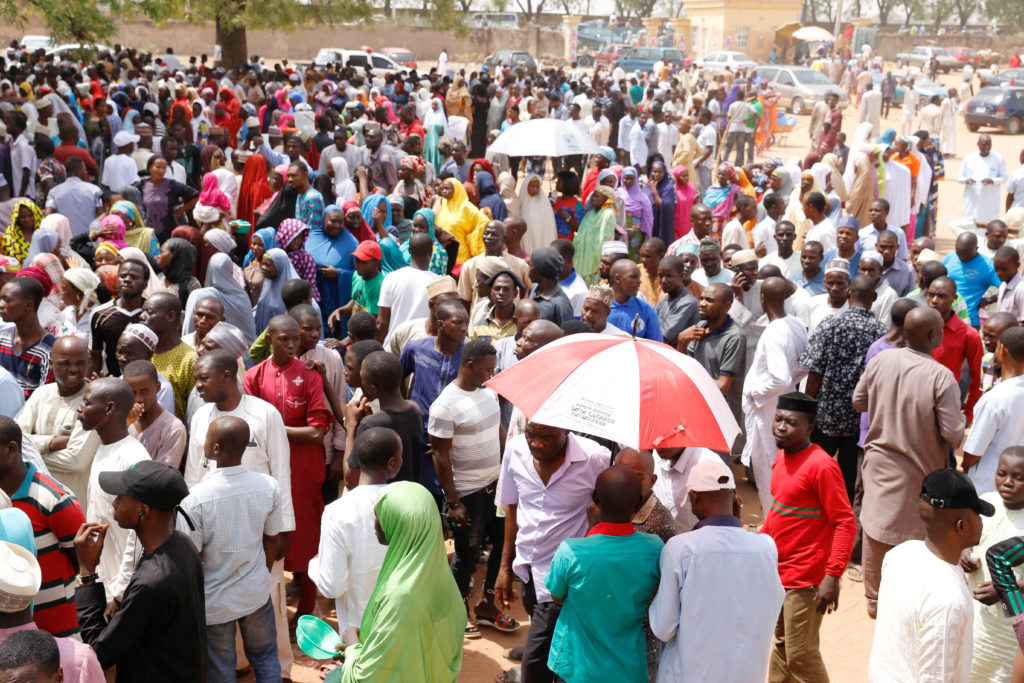 The incumbent Buhari brushed aside reporters’ questions about whether he would accept a loss to top challenger Atiku Abubakar , a billionaire former vice president. The president, first in line to vote in his northern hometown of Daura, jokingly checked the name on his wife’s ballot.

A smiling Abubakar, after voting in his hometown of Yola in the northeast, told reporters that “I look forward to a successful transition.” He previously pledged to accept the results, provided they are credible.

Buhari called the voting process smooth, but a coalition of civic groups said multiple polling units had not opened more than four hours after the official start. Delays were reported in Delta, Anambra and Akwa Ibom states as well as in Lagos, Nigeria’s largest city.

Local broadcaster Channels TV showed a crowd still waiting after noon for the start of voting in the north-central state of Nasarawa. Abubakar’s party called such delays “deliberate,” claiming overwhelming support there.

In north-central Kaduna, lines were long but impatient while waiting for materials to arrive nearly three hours late. Elsewhere, some officials worried that heavy security could intimidate potential voters.

Traffic restrictions were in place across the country, which also closed its borders. Raphael Dele, a popular singer in Yola, said he had walked over 10 kilometers (6 miles) to his polling station “because there is no room for excuses.”

Many Nigerians said the election will be decided by economic issues after a rough term for Buhari during which the country suffered a rare, months-long recession and unemployment grew significantly to 23 percent. 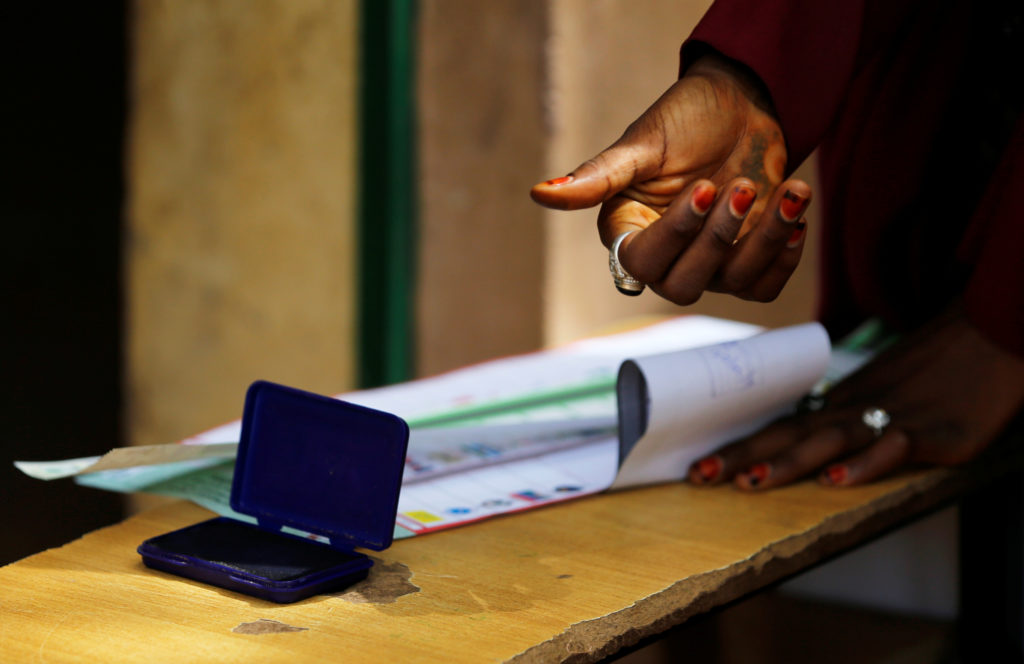 A woman casts her vote during Nigeria’s presidential election at a polling station in Kazaure, Jigawa State, Nigeria, February 23, 2019. Photo by Afolabi Sotunde/Reuters

The president “has failed,” said David Ojo, a barber in Danbatta in northern Kano state who joined excited voters in supporting Buhari in 2015. They assumed the former military dictator would solve the insecurity crisis and that prosperity would follow, Ojo said. Neither has occurred.

Buhari in a final address to the nation on Friday vowed that the more than 72 million Nigerians eligible to vote would be able to do so in peace.

But the Boko Haram extremist group, its Islamic State-affiliated offshoot in the northeast and various agitators across the country, including bandits, oil militants and youths hired by politicians to disrupt the vote, could have other plans.

“People are very sensitive about this election” in the north because both candidates hail from the region, said A. Rufai Mohammed, voting in the northern city of Kano. Yet he was concerned about the lower turnout from four years ago and blamed apathy. “What we are looking for is results, not excuses,” he said of the president.

Observers said the delay of the election from last week, blamed on logistical challenges, could favor Buhari and the ruling party, with some Nigerians saying they didn’t have the resources to travel to their place of registration a second time.

“After all, it is not my brother that is contesting,” said Patience Okoro in Agbor in the south. “So why will I kill myself or waste my time?”

We are not joking.

I just cast my vote at Ajiya Ward in Yola, Adamawa State. Go out and cast your vote too if you have not done so yet. -AA #NigeriaDecides2019 pic.twitter.com/TXE9oi6XU3

The delay also could hurt the election’s credibility, some said.

“The postponement casts a lingering doubt on the neutrality of (the electoral commission) such that unless Atiku is declared the winner, many will still believe that (the commission) colluded with the government to rig him out,” said Jideofor Adibe, associate professor of political science at Nasarawa State University.

Some of those who turned out, however, dismissed concerns about having to wait.

“It does not matter, it is for the will of God to take place,” voter Oseni Ukweni said in the capital, Abuja. “Everybody is excited to be here.”