BRUSSELS — EU chief negotiator Michel Barnier warned Tuesday that Britain’s disorderly exit from the European Union is becoming more likely by the day unless the U.K. drastically changes its spiraling course toward a no-deal Brexit.

“As things stand now, the no-deal option looks likely, I have to tell you the truth,” Barnier told European legislators.

Despite the downbeat assessment, Barnier said “we can still hope to avoid it” through intensive work in London ahead of an April 10 EU summit. A no-deal Brexit could come as soon two days after that.

“We still have a little bit of patience,” Barnier said, but urged British legislators and the government to take a more realistic approach as soon as possible.

Exiting without a deal in place would jeopardize trade and travel overnight, with new checks on borders and new regulations on dealings between Britain and the 27 remaining EU nations.

He warned that though the EU is prepared for a chaotic exit, challenges remain. “Being prepared for no deal does not mean that there will be no disruption,” he said.

“Not everything will be smooth, there will be problems. Being prepared means that all unforeseen problems should be manageable on the EU side,” Barnier said. 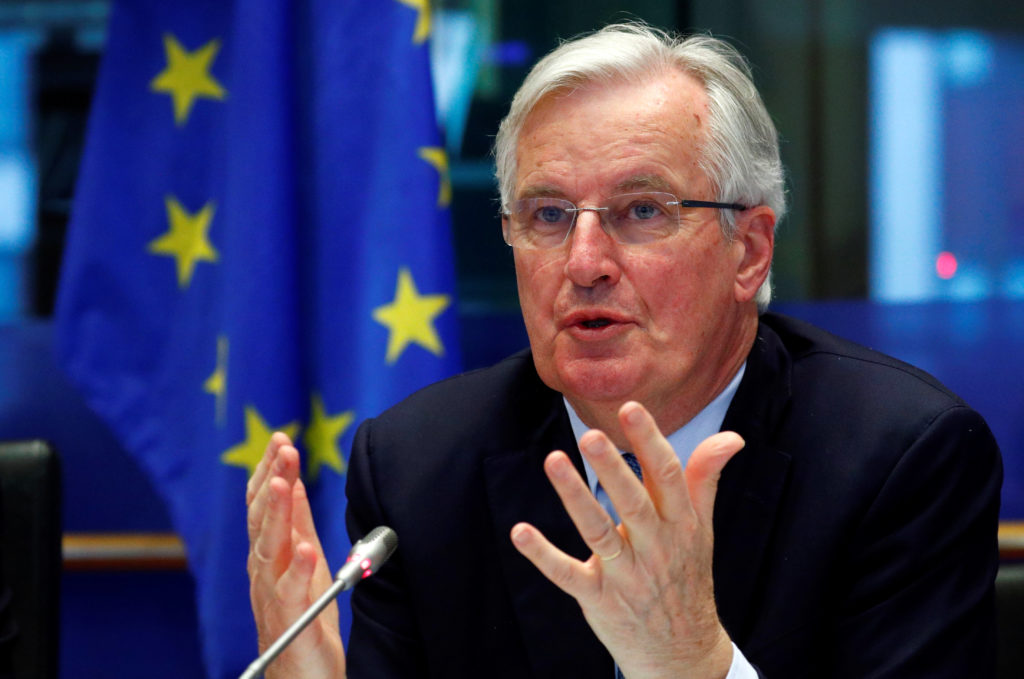 The EU had negotiated a long transition period with British Prime Minister Theresa May, but it was linked to the overall agreement that the U.K. parliament has rejected up to now.

“There is no transition if there is no deal,” Barnier warned.

Barnier insisted the EU would not renegotiate the 585-page withdrawal agreement but said he was willing to open up the political declaration that came with the legal text.

“If the U.K. so wishes, we are ready to rework the political declaration as long as the fundamental principles of the EU are respected,” he said.

With just 11 days until the U.K. must come up with a new plan or crash out of the bloc in chaos, the House of Commons on Monday threw out four options designed to replace May’s thrice-rejected Brexit deal — though in some cases it was close.

That vote result left May’s Conservative government facing difficult and risky choices. It can gamble on a fourth attempt to push the deal through Parliament, let Britain tumble out of the bloc without a deal, or roll the dice by seeking a snap election to shake up Parliament.

READ MORE: How Brexit became a ‘glass cliff’ for Theresa May

May has summoned her Cabinet for a marathon session as the government tries to find a way out of the crisis. The Cabinet is scheduled to meet for five hours Tuesday amid calls for compromise to prevent a potentially devastating no-deal exit.

The government is pushing for a fourth vote on May’s deal, with Education Secretary Damian Hinds saying the agreement already represents a compromise in the Brexit debate.

The alternative plan that got the most support in Parliament on Monday was a proposal for a customs union, which failed by just three votes. That rejection may be seen positively by May’s camp, which will discuss bringing the matter back to Parliament in the Cabinet session, said Anand Menon, a political analyst.

“The mood will be relatively upbeat at that because the government will still think it’s in with a chance of winning it’s meaningful vote,” Menon told The Associated Press. “Now I think they might be able to hold it together because actually Parliament isn’t threatening them with something that might divide them.”

Left: A pro-Brexit supporter is surrounded by EU flags outside the Houses of Parliament in London on April 1, 2019. Photo by Dylan Martinez/Reuters