North Korea said to be rebuilding at rocket launch site

SEOUL, South Korea — North Korea is restoring facilities at a long-range rocket launch site that it dismantled last year as part of disarmament steps, according to foreign experts and a South Korean lawmaker who was briefed by Seoul’s spy service.

An article from 38 North, a website specializing in North Korea studies, cited commercial satellite imagery as indicating that efforts to rebuild some structures at the site started sometime between Feb. 16 and March 2. 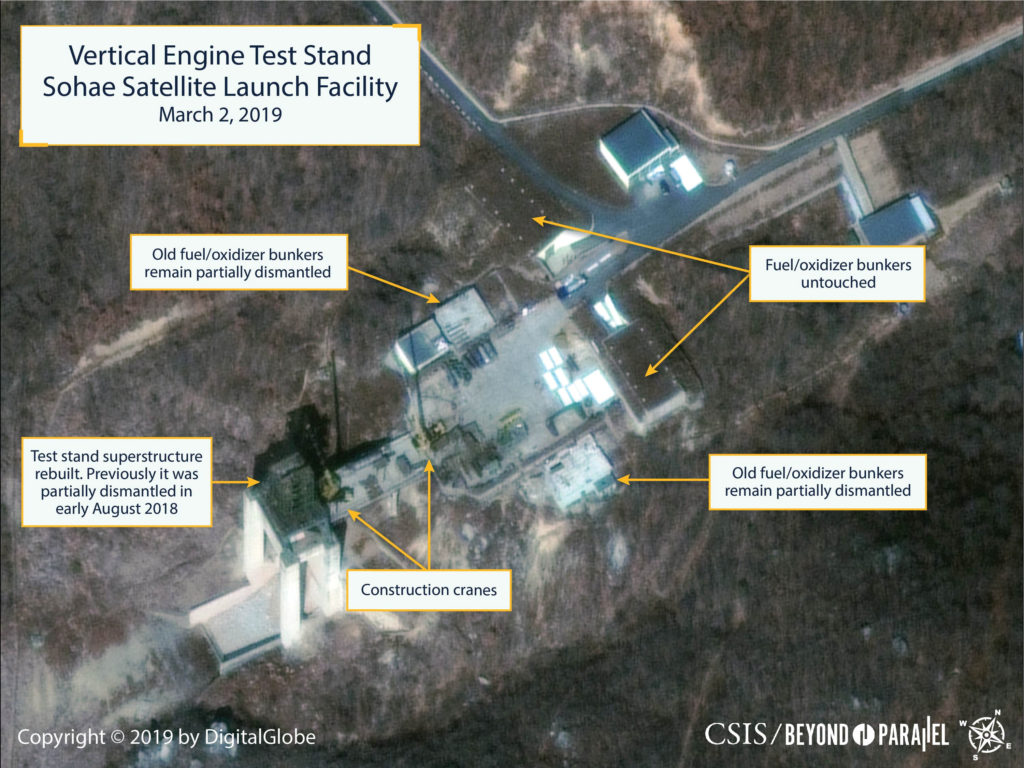 The Sohae Satellite Launching Station features what researchers of Beyond Parallel, a CSIS project, describe as the vertical engine stand partially rebuilt with two construction cranes, several vehicles and supplies laying on the ground in a commercial satellite image taken over Tongchang-ri, North Korea on March 2, 2019 and released March 5, 2019. CSIS/Beyond Parallel/DigitalGlobe 2019 via REUTERS. 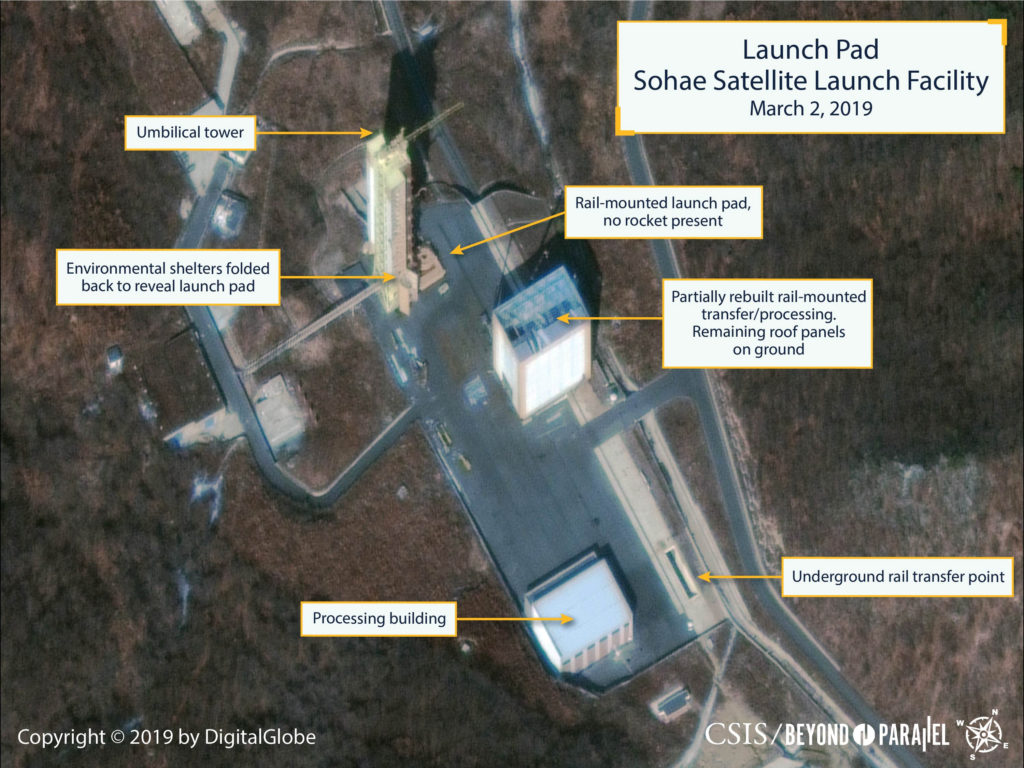 Dismantling parts of its long-range rocket launch facility was among several steps the North took last year when it entered nuclear talks with the United States and South Korea. North Korea has carried out satellite launches at the site in recent years, resulting in U.N. sanctions over expert claims that they were disguised tests of banned missile technology.

It wasn’t immediately clear how the report might affect nuclear diplomacy. The Trump-Kim summit fell apart because of differences over how much sanction relief North Korea could win in return for closing its aging main nuclear complex. The U.S. and North Korea accused each other of causing the summit breakdown, but both sides left the door open for future negotiations.

WATCH: How ‘overreach’ by Trump and Kim set summit up for failure

One of the South Korean lawmakers who attended the briefing said Wednesday that NIS director Suh Hoon said the structures being restored at the launch site include roofs and building doors.

The lawmaker requested anonymity because of the sensitive nature of the information.

He quoted Suh as saying that the move could be preparation to restart long-range rocket launches if nuclear diplomacy completely collapses, or could be an attempt to add structures that could be dramatically blown up in a show of denuclearization commitment when U.S. inspectors visit if negotiations with Washington go well.

The NIS said it couldn’t confirm the report on Suh’s briefing.

The 38 North report published Tuesday said the rail-mounted processing building, which is where space launch vehicles are worked on before they’re moved to the launch pad, is being reassembled. It said two support cranes can be seen at the building, and walls have been erected and a new roof added.

At the engine test stand, the website said it appears that the engine support structure is being reassembled. It said new roofs have been installed on the fuel and oxidizer buildings.

The report was written by Jack Liu and Jenny Town.

Beyond Parallel, a website run by the Center for Strategic and International Studies think tank, issued a similar assessment of the Tongchang-ri site. It said satellite imagery taken Saturday, two days after the failed summit, showed North Korea “is pursuing a rapid rebuilding” of the rocket site.

After repeated failures, North Korea successfully put a satellite into orbit for the first time in 2012 in a launch from the site, which is also known as the Sohae Satellite Launching Station. North Korea had another successful satellite launch in 2016.

North Korea has said its satellite launches are part of its peaceful space development program. None of the country’s high-profile missile tests, including three ICBM launches in 2017, was conducted at the site.

After carrying out the third of its three ICBM launches in late 2017, North Korea claimed to be able to attack the mainland United States with nuclear-armed missiles. Foreign missile experts say the North still needs to master a few remaining technologies, such as perfecting a re-entry vehicle, to have functioning ICBMs.

In early 2018, North Korea abruptly expressed its intention to deal away its weapons arsenal in return for political and economic benefits. The North has since suspended nuclear and missile tests and dismantled its underground nuclear testing site.

Its dismantling of parts of the Tongchang-ri facility occurred at the beginning of U.S.-North Korea negotiations last year. Both the launch pad and engine test stand were in about the same condition since last August, according to the 38 North report.

After a September summit with South Korean President Moon Jae-in in Pyongyang, North Korea’s capital, Kim agreed to “permanently shut down” the Tongchang-ri engine test ground and rocket launch pad with the participation of foreign experts.

A statement issued by Kim and Moon categorized the steps as parts of a broader goal to make the Korean Peninsula free from nuclear weapons and nuclear threat. This could suggest that North Korea acknowledged that the Tongchang-ri site is a nuclear-related facility.

Left: In this 2016 file photo, a rocket engine for the geo-stationary satellite at the Sohae Space Center is displayed. New reports indicate North Korea has begun to rebuild at the Sohae launch site. Photo released by North Korea's Korean Central News Agency (KCNA) via Reuters

After months of buildup, Hanoi talks conclude early — with no deal