JERUSALEM — Gaza militants on Sunday intensified a wave of rocket fire into southern Israel, striking towns and cities and killing at least three people in one of the bloodiest rounds of fighting since the 2014 war. At least nine Palestinians, including a pregnant woman and her 14-month-old niece, have also been killed.

Israeli forces struck dozens of targets throughout Gaza, including militant sites that the military said were concealed in homes or residential areas. The army also moved armored units toward Gaza as the sides headed closer to all-out war. 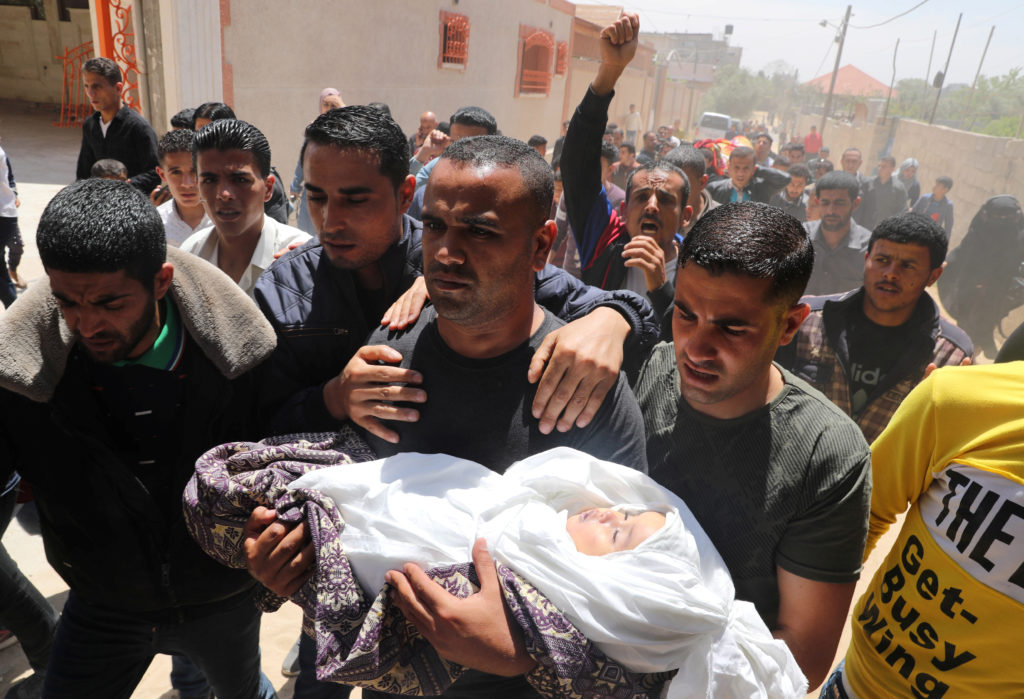 The father of of 14-month old Palestinian baby Seba Abu Arar carries her body during her funeral in Gaza City May 5, 2019. Photo by Mohammed Salem /Reuters

Israel and Hamas are bitter enemies that have fought three wars since the Islamic militant group seized control of Gaza in 2007, as well as numerous smaller flare-ups, most recently in late March.

These flare-ups have become increasingly frequent in recent years, ending in informal Egyptian-mediated truces in which Israel pledges to ease a crippling blockade on Gaza imposed after the Hamas takeover while the militants promise to halt rocket fire.

As with previous rounds of fighting, the latest violence began late last week amid Palestinian accusations that Israel was not moving quickly enough to ease the blockade. 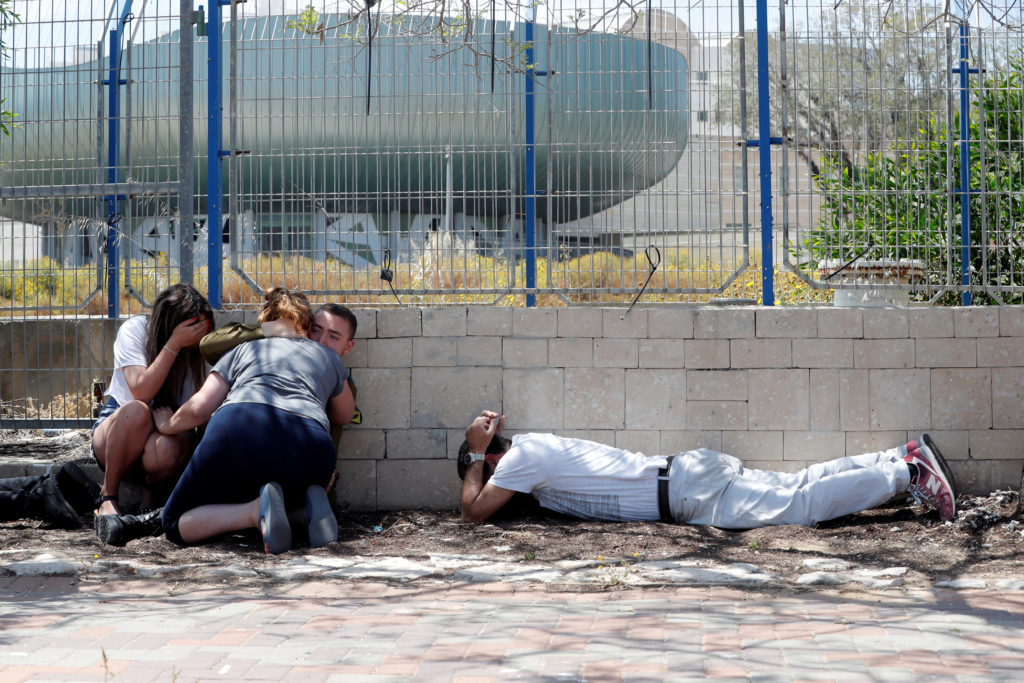 Israelis take cover as they hear sirens warning of incoming rockets from Gaza, during cross-border hostilities, in the southern Israeli city of Ashkelon May 5, 2019. Photo by Ronen Zvulun/Reuters

In Sunday’s fighting, Moshe Agadi, a 58-year-old Israeli father of four, was struck in the chest by shrapnel in a residential courtyard. The Barzilai Medical Center said a 49-year-old man was killed when a rocket hit an Ashkelon factory, while a second man was killed when his vehicle was hit by a projectile near Yad Mordechai, a small border community.

By late afternoon, the Israeli military said militants had fired over 600 rockets into Israel, and that Israeli forces had launched some 260 airstrikes against militant targets in Gaza.

The other dead included a pregnant woman and her niece, who were killed in what the officials said was an Israeli airstrike. The Israeli military denied involvement, saying the woman and baby were killed by a misfired Palestinian rocket. There was no way to reconcile the conflicting accounts.

Palestinian officials identified one of the militants as Hamas commander Hamed al-Khoudary, who Israel said was a key player in transferring Iranian money to the militant group. 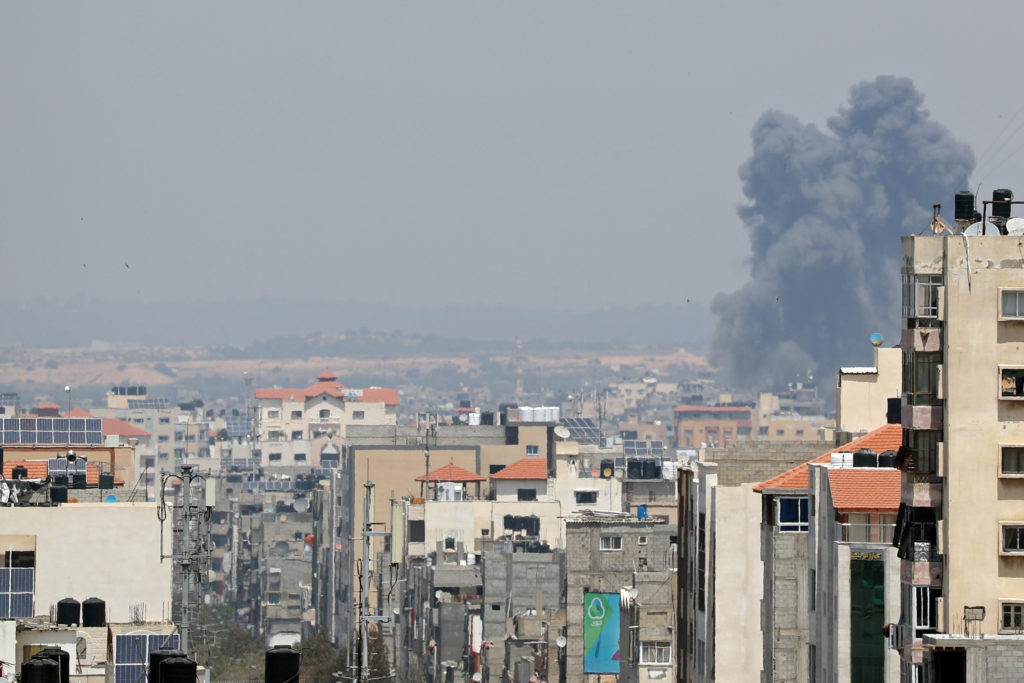 The sudden outburst has broken a monthlong lull as Egyptian mediators had been trying to negotiate a long-term cease-fire.

The military spokesman said Israel was deploying an armored brigade along the Gaza front, with tanks ready for offensive missions as needed. The Israeli military has already struck rocket launchers, tunnel shafts, training sites, storage depots and warehouses of both the territory’s Hamas rulers and the smaller, Iranian-backed Islamic Jihad group.

Israeli Prime Minister Benjamin Netanyahu said Hamas was paying a “heavy price” for its rocket attacks, as well as those by Islamic Jihad.

Sirens wailed along the border region overnight and throughout the day warning of incoming attacks. School was canceled and roads were closed.

In Gaza, large explosions thundered across the blockaded enclave during the night as plumes of smoke rose into the air. 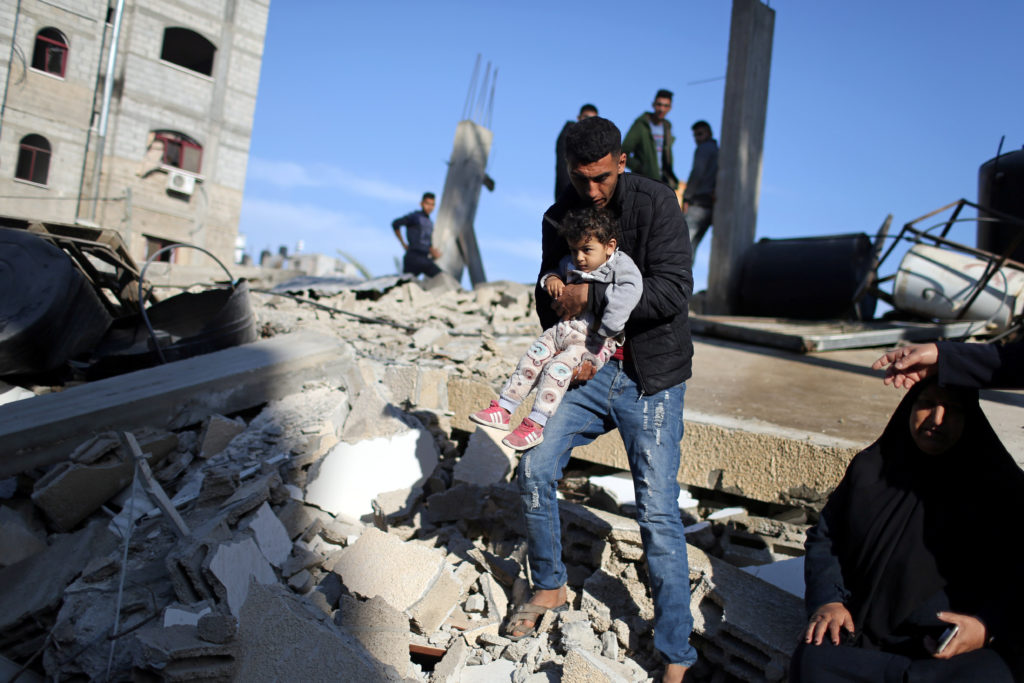 A Palestinian man carries a child as he walks through the debris of a house destroyed by an Israeli air strike, in the southern Gaza Strip May 5, 2019. Photo by Ibraheem Abu Mustafa/Reuters

By morning, bulldozers were clearing rubble and municipal workers were fixing damaged power lines. Owners of clothing stores that were destroyed in Gaza City’s relatively upscale Remal neighborhood squatted across the streets from where their stores had stood, cupping their faces in their hands.

One of the airstrikes hit a six-story commercial and residential building that housed the office of Turkey’s official Anadolu news agency.

“We thought the Rimal neighborhood is safe, but it seems there is no safe place in Gaza,” said Nidal al-Dali, who lived in the building and lost his home.

The Israeli military said its Iron Dome defense system intercepted more than 150 of the projectiles from Gaza, but several still managed to slip through. A rocket scored a direct hit on a residential home in the border town of Sderot.

Dr. Ron Lobel, deputy director of the Barzilai Medical Center in Ashkelon, said teams had treated over 110 people, most from shock symptoms, but several with physical wounds. In a first, the hospital itself was also hit by debris from a rocket that was intercepted by an Iron Dome missile. There were no injuries, but the debris struck the hospital’s oncology unit, bursting a pipe and sending water pouring from a ceiling into the hallway.

Israel has vowed to hit back hard against both Hamas and Islamic Jihad, whom it suspects of triggering the current conflagration. But, as in previous rounds where it stopped short of a full-fledged war, the timing for a prolonged round of fighting is tricky for Israel.

The country marks Memorial Day and Independence Day this week. The following week it is set to host the Eurovision song contest, in which large groups of tourists are expected.

For Gazans, the violence comes ahead of the Muslim holy month of Ramadan, in which the faithful fast from dawn to dusk, which begins Monday.

In recent days, Hamas accused Israel of reneging on its pledges as militants began to fire rockets.

Israel accuses Islamic Jihad of operating behind Hamas’ back and instigating the latest round of violence by shooting and wounding two Israeli soldiers on Friday. Two Palestinians were shot dead by Israeli forces the same day during weekly protests along the Israel-Gaza perimeter fence.

Yaakov Amidror, a former Israeli national security adviser, said the violence was being instigated by Islamic Jihad at the behest of their backers in Iran. Amidror, currently a senior fellow at the Jerusalem Institute for Strategy and Security, said a new war in Gaza would distract Israel and leave Tehran “free to continue what they are doing in Syria.” Iran is allied with President Bashar Assad’s forces in the civil war and has been building up a military presence there in recent years, which Israel views as an unacceptable threat.

The resurgence of violence threatens to shatter the shaky understandings recently reached though Egyptian mediators. Palestinian militant leaders were in Cairo trying to reach a new cease-fire.

Hamas hopes Egyptian mediators can further ease the blockade, which has ravaged Gaza’s economy. For over a year, Hamas has orchestrated mass demonstrations each week along the Israeli frontier to draw attention to Gaza’s plight. More than 200 Palestinians and an Israeli soldier have been killed in the border protests.

Left: Friends and relatives mourn during the funeral of Moshe Agadi, an Israeli man who was killed after a rocket fired from Gaza hit his house, during cross-border hostilities, in the southern Israeli city of Ashkelon May 5, 2019. Photo by Ronen Zvulun/Reuters