GAZA CITY, Gaza Strip — Palestinian militants in the Gaza Strip fired scores of rockets into southern Israel on Saturday, wounding at least two Israeli civilians and triggering retaliatory airstrikes and tank fire against militant targets in the blockaded enclave and shattering a month-long lull in violence.

Israeli officials said a 50-year-old woman was severely wounded by rocket fire, while a teenage boy was mildly hurt as he ran for cover. Gaza’s Health Ministry said a 22-year-old Palestinian man was killed by an Israeli airstrike, and seven other Palestinians were wounded. Israeli police said a house in the coastal city of Ashkelon was damaged. 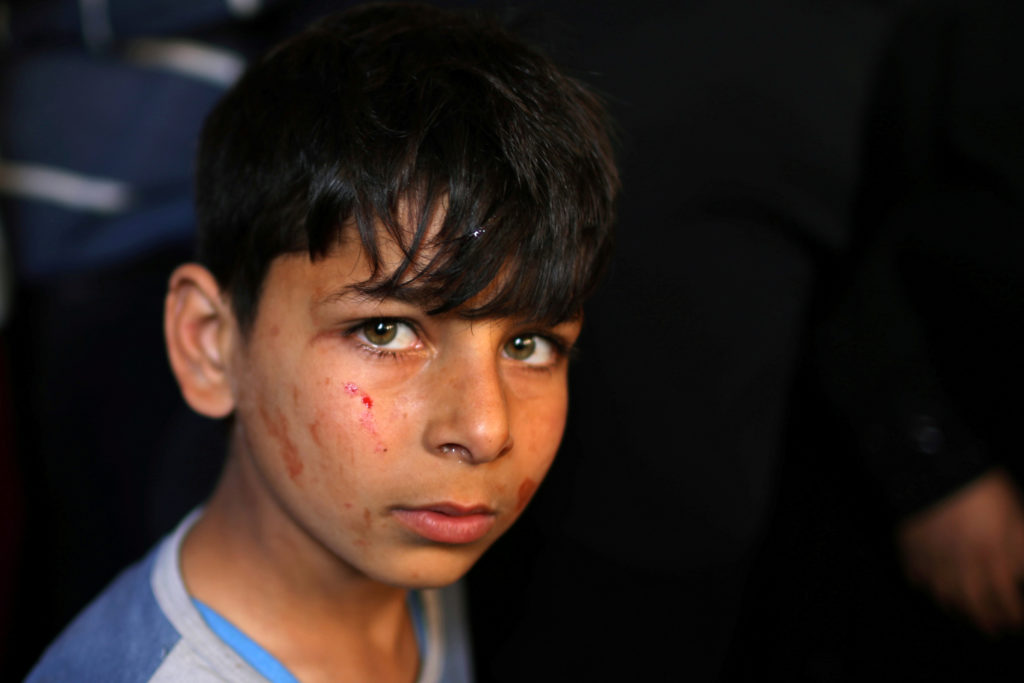 The brother of Emad Naseer, who was killed in an Israeli air strike, looks on as he has his face stained with his brother’s blood during his funeral in the northern Gaza Strip May 4, 2019. Photo by Mohammed Salem/Reuters

The outbreak of fighting came as leaders from Hamas, the militant group that controls Gaza, and the smaller armed faction Islamic Jihad were in Egypt for talks with mediators aimed at restoring a fraying cease-fire. Hamas leaders have hoped the recent calm would pave the way for a deeper, longer-term cease-fire.

Tensions have been rising in recent days amid allegations from Hamas that Israel has been delaying implementation of last month’s cease-fire understandings. 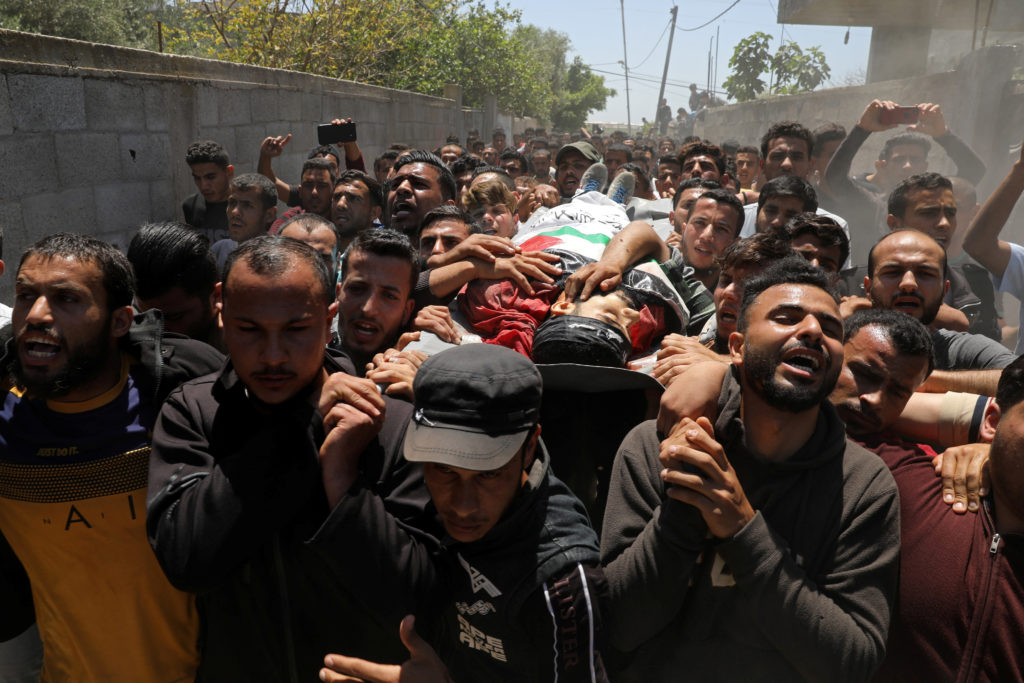 Mourners carry the body of Emad Naseer, who was killed in an Israeli air strike, during his funeral in the northern Gaza Strip May 4, 2019. Photo by Mohammed Salem/Reuters

Air raid sirens sounded in southern Israeli throughout the day. By late afternoon, the military said some 150 rockets had been fired into Israel. It said dozens of rockets were intercepted by its Iron Dome rocket-defense system, and that roads near the Gaza border were closed to civilian traffic. Israeli police said they had dispatched bomb disposal experts to the country’s south to deal with projectiles that landed in open areas.

The army said its chief of staff, Lt. Gen. Aviv Kochavi, convened an emergency session with top security officials to discuss the situation. Later, it said it had hit 30 targets in Gaza, including what it said were five Hamas military compounds and several Islamic Jihad compounds. 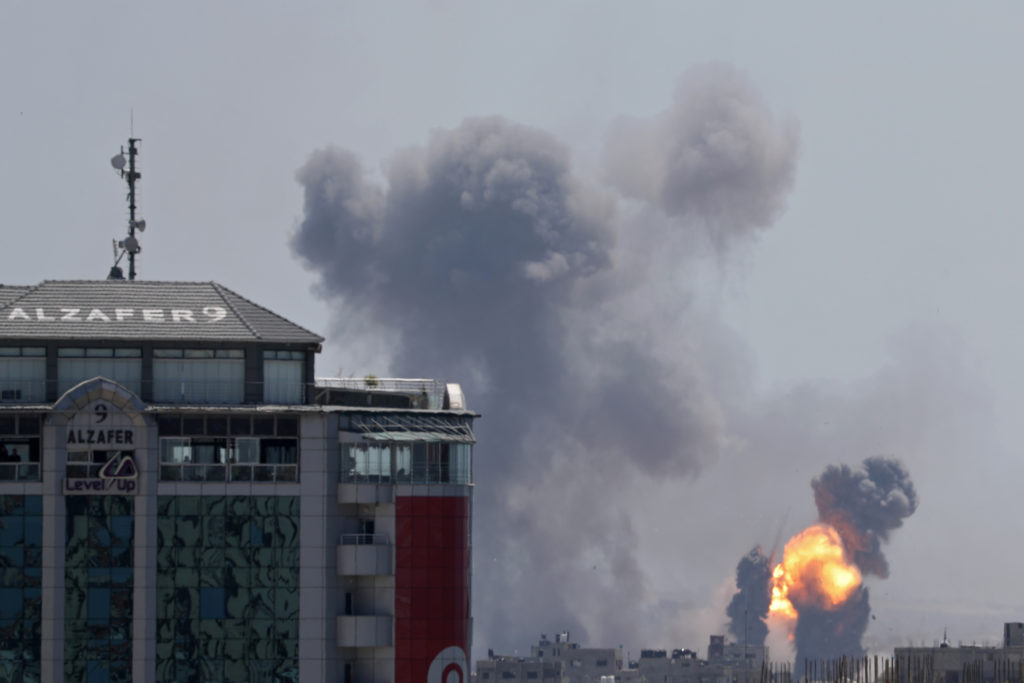 A ball of fire is seen during Israeli air strikes in Gaza May 4, 2019. Photo by Mohammed Salem/Reuters

COGAT, the Israeli defense body responsible for Palestinian civilian affairs, said it was closing the fishing zone off Gaza’s coast altogether and sealing Israel’s two land crossings with Gaza. The crossings are used by Palestinian medical patients to enter and exit the territory, and provide the main entry for cargo into the blockaded territory.

Islamic Jihad, a smaller Iranian backed militant group that sometimes acts independently of Hamas, threatened to fire longer range rockets toward Israel’s heartland. In a video that also was seen an implicit claim of responsibility, it showed archived footage of militants attaching warheads to rockets. 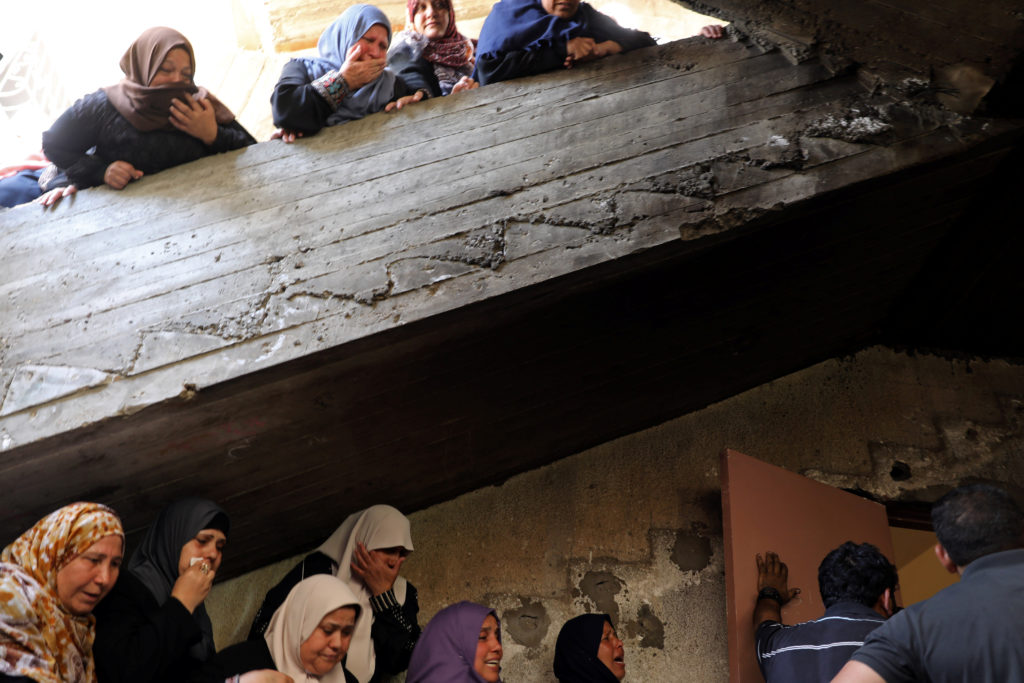 Relatives of Palestinian militant Emad Naseer, who was killed in an Israeli air strike, mourn during his funeral in the northern Gaza Strip May 4, 2019. Photo by Mohammed Salem/Reuters

Israel and Egypt have maintained a crippling blockade on Gaza since Hamas seized control of the territory in 2007. The sides are bitter enemies and have fought three wars and engaged in numerous smaller flare-ups of violence.

Following heavy fighting in late March, Israel agreed to ease the blockade in exchange for a halt to rocket fire. This included expanding a fishing zone off Gaza’s coast, increasing imports into Gaza and allowing the Gulf state of Qatar to deliver aid to cash-strapped Gaza.

But like previous Egyptian-mediated agreements, those understandings have shown signs of unraveling in recent days.

Hamas has hoped that Egyptian mediators could further ease the blockade, which has ravaged Gaza’s economy. For over a year, the Islamic group has orchestrated mass demonstrations each week along the Israeli frontier to draw attention to Gaza’s plight. More than 200 Palestinians and an Israeli soldier have been killed in the border protests.

Left: Relatives of Palestinian Raed Abu Tair, who was killed during a protest at the Israel-Gaza border fence, mourn during his funeral in the southern Gaza Strip May 4, 2019. REUTERS/Mohammed Salem - RC1F44B9E0E0