The coronavirus pandemic is straining social safety nets across the globe — and underlining sharp differences in approach between wealthy societies such as the United States and Europe.

In Europe, the collapse in business activity is triggering wage support programs that are keeping millions on the job, for now. In contrast, in the United States more than 33.5 million people have applied for jobless benefits and the unemployment rate has soared to 14.7%. Congress has passed $2 trillion in emergency support, boosting jobless benefits and writing stimulus checks of up to $1,200 per taxpayer.

That is a pattern seen in earlier economic downturns, particularly the global financial crisis and the Great Recession. Europe depends on existing programs kicking in that pump money into people’s pockets. The U.S., on the other hand, relies on Congress taking action by passing emergency stimulus programs, as it did in 2009 under President Barack Obama, and the recent rescue package under President Donald Trump.

Economist Andre Sapir, a senior fellow at the Bruegel research institute in Brussels, said budget policy in the U.S. plays partly the role that Europe’s welfare system plays because the American welfare system is less generous and a recession can be much harsher on workers.

In downturns, U.S. employees can lose their health insurance if they lose their job and there’s also a greater risk of losing one’s home through foreclosure. On the other hand, Europeans typically pay higher taxes, meaning they earn less in the good times.

“In the U.S. you need to keep pumping money into the economy so that people continue to be employed, because it is through being employed that they are protected,” said Sapir. “Which is the better system? I’m not going into that discussion because that is really a huge issue.”

The U.S. tends to rank below average on measures of social support among the 37 countries of the Organization for Economic Development and Cooperation, whose members are mostly developed democracies. The U.S. came last in people living in relative poverty, meaning living on half the median income or less, with 17.8%. Countries like Iceland, Denmark, the Czech Republic and Finland have less than 6%.

Here’s a look at how the social safety nets of the U.S. and Europe compare:

Americans on unemployment were collecting an average of about $372 weekly before the coronavirus struck. But that average could range from $215 in Mississippi to $543 in Hawaii. The rescue package gave jobless workers an additional $600 a week through July. It also extended benefits to those who lost work as a result of the coronavirus outbreak, which could include parents who needed to leave their jobs because schools were closed. Most states offer six months of unemployment but the emergency legislation adds 13 weeks.

By comparison, Germany’s jobless benefit pays 60% of previous salary for a year. France provides up to 75% of the previous average daily wage for up to two years. Unemployment benefits in France are on average 1,200 euros ($1,320) per month. 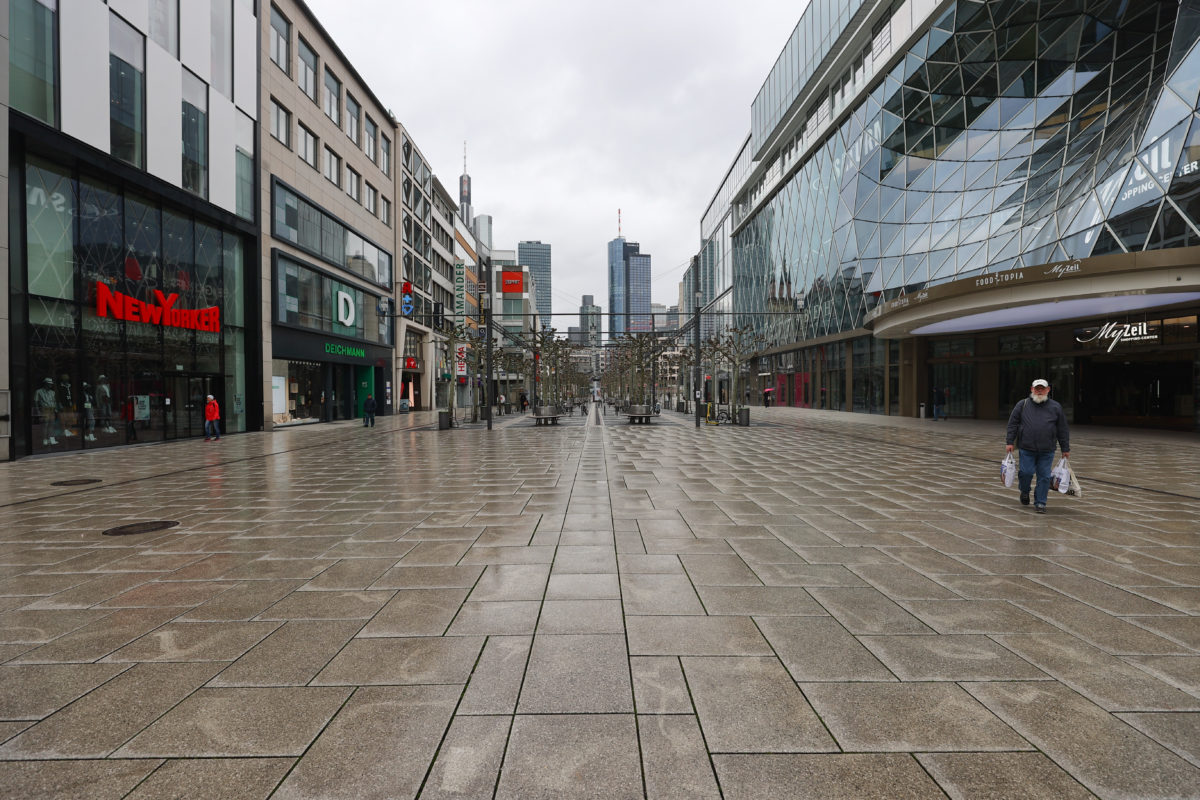 The famous shopping street “Zeil” is seen during a partial lockdown in Frankfurt, Germany, March 21, 2020, as the spread of the coronavirus disease (COVID-19) continues. Photo by Kai Pfaffenbach/Reuters.

And there’s Europe’s short-hours programs, which pay most of worker salaries if companies put them on shorter hours through a temporary disruption. More than 10 million workers are being paid that way in Germany and about 12 million in France, helping hold eurozone unemployment to only a 0.1 percentage point increase in March over February, to 7.4%.

The U.S. emergency package included money for cheap loans to businesses that can be forgiven if the money is used mostly for payroll.

Nearly half of Americans receive health insurance through their employers, while another 34% get benefits through the government programs Medicare and Medicaid. Separately, 6% are insured individually and 9% in 2018 had no insurance at all.

In Europe, universal health coverage is the rule, generally funded by payroll or other taxes. One example is Britain’s National Health Service, which is funded by taxes and offers free care that costs the government 7% of GDP per year.

In France, by contrast, mothers are entitled to at least 16 weeks of leave for their first child and must take at least 8 weeks. From the third child onward, they are allowed 26 weeks. Workers get a daily maternity leave allowance of up to 89 euros ($94.50). But some professions have their own more favorable deals, up to the complete payment of salaries.

Denmark gives 52 weeks of parental leave after a birth or adoption, to be shared by the parents; whether at full salary or not depends on workplace agreements.

Roughly 8.3 million Americans collect disability benefits earned through Social Security contributions. The payments average $15,100 annually — just above the poverty level for a one-person household of $12,760. Standards are strict and most applications are denied; people who don’t qualify may wind up on food stamps, a basic subsistence program. The U.S. ranks 30th among 36 OECD countries in spending on all forms of disability related to work or illness.

In France, the totally disabled are eligible for public health insurance payments of at least 292.80 euros ($311) a month and no more than 1,714 euros ($1,825). Those who are totally unable to work and also depend on help for daily tasks are eligible for 1,418 to 2,839 euros ($1,510 to $3,027) a month. The payments can be combined with other forms of income and be subjected to tax and social security contributions.

In the United States, Social Security contributions amounted to 6% of GDP in 2018, according to the OECD. In France it was almost three times higher, at 16% of annual GDP, while in Germany it was just over 14%.

Sylvie Corbet and John Leicester in Paris, Josh Boak in Washington and Jan M. Olsen in Copenhagen contributed to this report.

Left: Claudio Facoetti, 65, from the northern Italian city of Bergamo, near Milan, receives a face mask from an intensive care nurse upon being released from the university clinic Saint Josef of Bochum after recovering within six weeks from the coronavirus disease (COVID-19) in Bochum, Germany, May 9, 2020. Photo by Wolfgang Rattay/Reuter.s