Paris braces for new round of violence amid widespread protests

PARIS — Paris police and store owners are bracing for new violence at protests Saturday, despite President Emmanuel Macron’s surrender over a fuel tax hike that unleashed weeks of unrest.

Some “yellow vest” protesters called for calm Thursday after the worst rioting in Paris in decades last weekend. Many shops and restaurants in the center of the capital are shutting down Saturday, fearing a repeat of the violence.

Macron on Wednesday agreed to abandon the fuel tax hike, but protesters’ demands have now expanded to other issues. 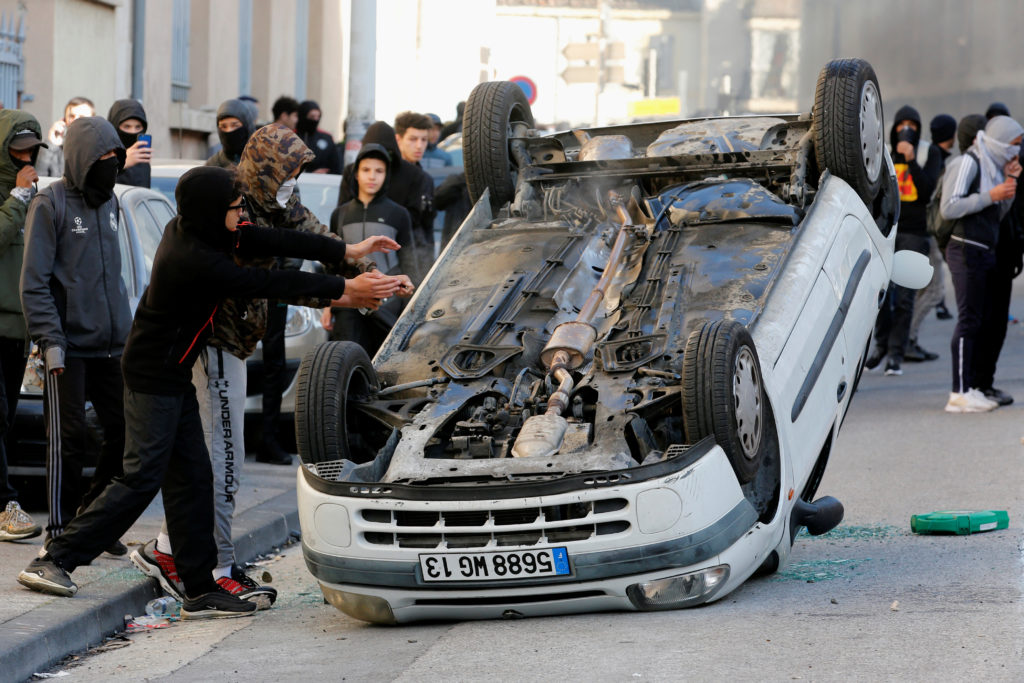 A vandalized car is seen in the street as youths and high-school students clash with police during a demonstration against the French government’s reform plan in Marseille, France, December 6, 2018. Photo by Jean-Paul Pelissier/Reuters

A small union representing police administrative personnel called for a strike Saturday, which could further complicate security measures Saturday. Other police unions are not talking about strikes — but two police union officials told The Associated Press they are worried about radical troublemakers and others taking advantage of the protest atmosphere to cause even greater damage this Saturday.

Everyone is worried about risks in the face of a movement with no clear leaders whose protests are easily hijacked by troublemakers of all stripes. The government is contributing to the fear with dire warnings about new violence by extremists or other troublemakers. “We cannot let these rebels continue to threaten the nation,” Interior Minister Christophe Castaner said Thursday.

Police have come under criticism for failing to prevent damage to the Arc de Triomphe and stores along the famed Champs-Elysees in central Paris, as well as for violence against protesters.

Videos circulating on social media of police beating protesters at a Burger King on the Champs-Elysees have deepened the anger. A police spokeswoman said Thursday an investigation is underway into that incident, and that police are examining other videos shared online for possible violations. 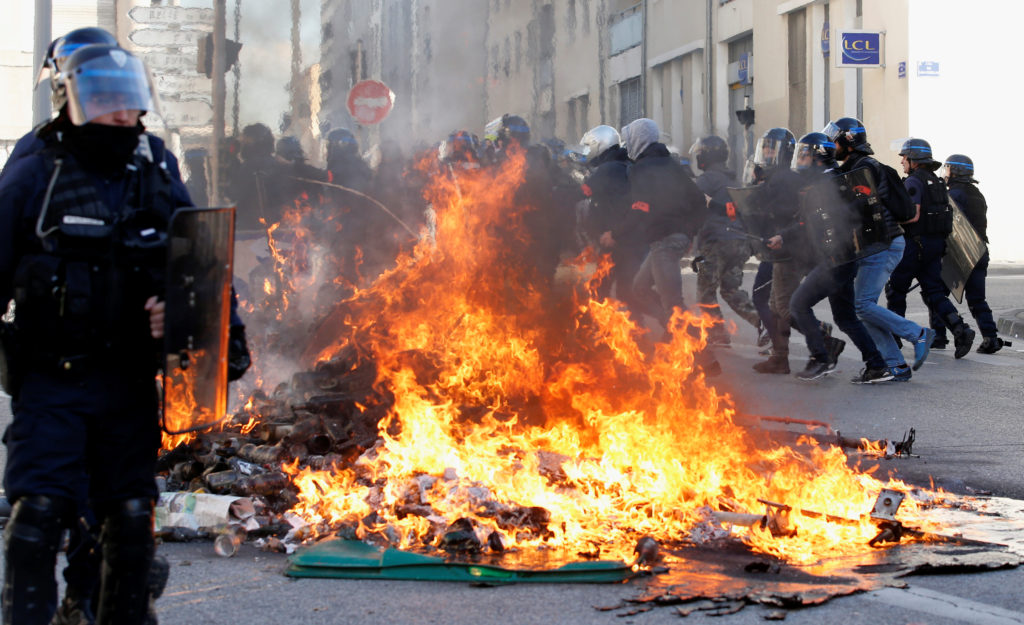 Trash bins burn as youths and high-school students clash with police at a demonstration against the French government’s reform plan in Marseille, France, December 6, 2018. Photo by Jean-Paul Pelissier/Reuters

Macron himself, the central target of the protests, has been largely invisible all week. After winning election overwhelmingly last year, the 40-year-old pro-business centrist alienated many of his own voters with tax cuts for the rich and other badly explained reforms — and what many see as his elitist, out-of-touch attitude.

He doesn’t face re-election until 2022 and his party has a strong majority in parliament, but his political opponents are increasingly vocal and plan a no-confidence vote in the government next week.

The government is trying to calm tensions but not succeeding so far. The transport minister met Thursday with truckers’ unions, but they maintained their plans to go on strike Sunday over overtime bonuses. 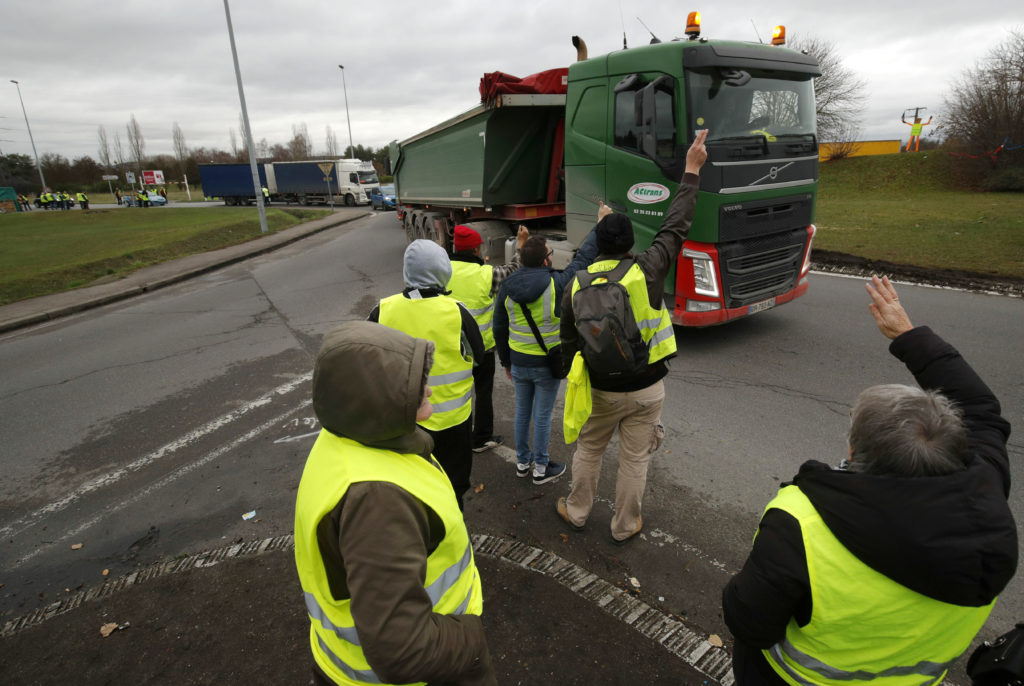 The rioting in Paris has worried tourists, prompted the cancellation of four French league soccer matches this weekend around the country, and damaged the local economy at the height of the holiday shopping season. Rampaging groups threw cobblestones through storefronts and looted valuables in some of the city’s richest neighborhoods.

Clement Rozey, manager of a motorcycle shop in western Paris, spent two days and two nights cleaning up after he watched powerless as a group of thugs smashed his shop windows and emptied his shelves.

He has boarded up the store and will stay closed Saturday.

“We’re going to have a security company with security guards inside and outside the shop,” Rozey told the AP. “Everything has been fenced off, several times.”

Yet he remains sympathetic to the protest movement.

“Just like everybody, we’re strangled (financially) after the 15th of the month,” he said, referring to the day when many workers are paid. The protesters “are defending a cause, they’re following through and rightly so. We support them whole-heartedly,” he said. But violent troublemakers who pillage and riot — “that’s something else.”

Left: A protester wearing a yellow vest, the symbol of a French drivers' protest against higher diesel fuel prices, holds a flag near burning debris at the approach to the A2 Paris-Brussels Motorway, in Fontaine-Notre-Dame, France. Photo by Pascal Rossignol/Reuters