PARIS — French President Emmanuel Macron scrapped a fuel tax rise Wednesday amid fears of new violence, after weeks of nationwide protests and the worst rioting in Paris in decades.

Protesters celebrated the victory, but some said Macron’s surrender came too late and is no longer enough to quell the mounting anger at their president, whom they consider out-of-touch with the problems of ordinary people.

Macron decided Wednesday to “get rid” of the tax planned for next year, an official in the president’s office told The Associated Press. Prime Minister Edouard Philippe told lawmakers the tax is no longer included in the 2019 budget.

The decision has ramifications beyond France, since the fuel tax rise was part of Macron’s efforts to wean France off fossil fuels.

The decision has ramifications beyond France, since the fuel tax rise was part of Macron’s efforts to wean France off fossil fuels in order to reduce greenhouse gases and slow down climate change. Its withdrawal is both a blow to broader efforts to fight climate change and a warning to other world leaders trying to do the same thing.

The “yellow vest” protests began Nov. 17 over the government plan to raise taxes on diesel and gasoline, but by the time Macron bowed to three weeks of violence and abandoned the new fuel tax, the protesters were demanding much more. Many workers in France are angry over the combination of low wages, high taxes and high unemployment that have left many people struggling financially.

On Tuesday, the government agreed to suspend the fuel tax rise for six months. But instead of appeasing the protesters, it spurred other groups to join in, hoping for concessions of their own. The protests took on an even bigger dimension Wednesday with trade unions and farmers vowing to join the fray.

So after nightfall, as parliament debated the 2019 budget, Macron’s government suddenly gave in.

“I have no problem with admitting that on such or such question we could have done differently, that if there is such a level of anger … it’s because we still have a lot of things to improve,” the prime minister told legislators.

Philippe said “the tax is now abandoned” in the 2019 budget, and the government is “ready for dialogue.” The budget can be renegotiated through the year, but given the scale of the recent protests, Macron is unlikely to revive the added fuel tax idea anytime soon.

Jacline Mouraud, one of the self-proclaimed spokespeople for the disparate yellow vest movement, told the AP that Macron’s concession “comes much too late, unfortunately.”

“It’s on the right path, but in my opinion it will not fundamentally change the movement,” she said.

The sweep of the protests and their wide support by citizens of all political stripes has shocked Macron’s government. In the last few days, Paris saw the worst anti-government riot since 1968; French students set fires outside high schools to protest a new university application system; small business owners blocked roads to protest high taxes and retirees marched to protest the president’s perceived elitism. 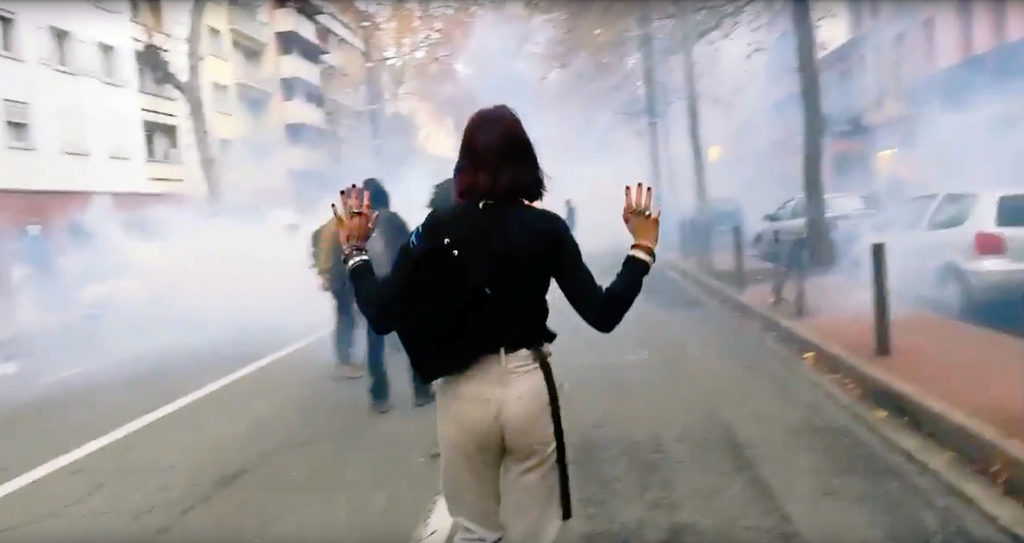 A woman holds up her hands walking near the burning barricades during the clashes with protesters wearing yellow vests, a symbol of a French drivers’ protest against higher diesel taxes, Toulouse, France. Photo courtesy: Reuters

Macron’s popularity has slumped to a new low since the demonstrations began. The former investment banker, who has pushed pro-business economic reforms to make France more competitive globally, is accused of being the “president of the rich” and of being estranged from the working classes.

On Wednesday, France’s largest farmers’ union said it will launch anti-government protests next week, after trucking unions called for a rolling strike.

Trade unions have not so far played a role in the yellow vest protest movement but are now trying to capitalize on the growing public anger. A joint statement from the CGT and the FO trucking unions called for action Sunday night to protest a cut in overtime rates.

The FNSEA farmers’ union said it would fight to help French farmers earn a better income but would not officially be joining forces with the “yellow vests” — protesters wearing the high-visibility vests that motorists are required to keep in their cars.

French police have cleared most of the fuel depots that protesters had blocked earlier in the week, but fuel shortages still hit parts of France on Wednesday, affecting hundreds of gas stations.

Demonstrators also blocked toll booths, letting drivers pass without paying, to press demands that ranged from higher incomes and pensions to the dissolution of the National Assembly, France’s parliament. 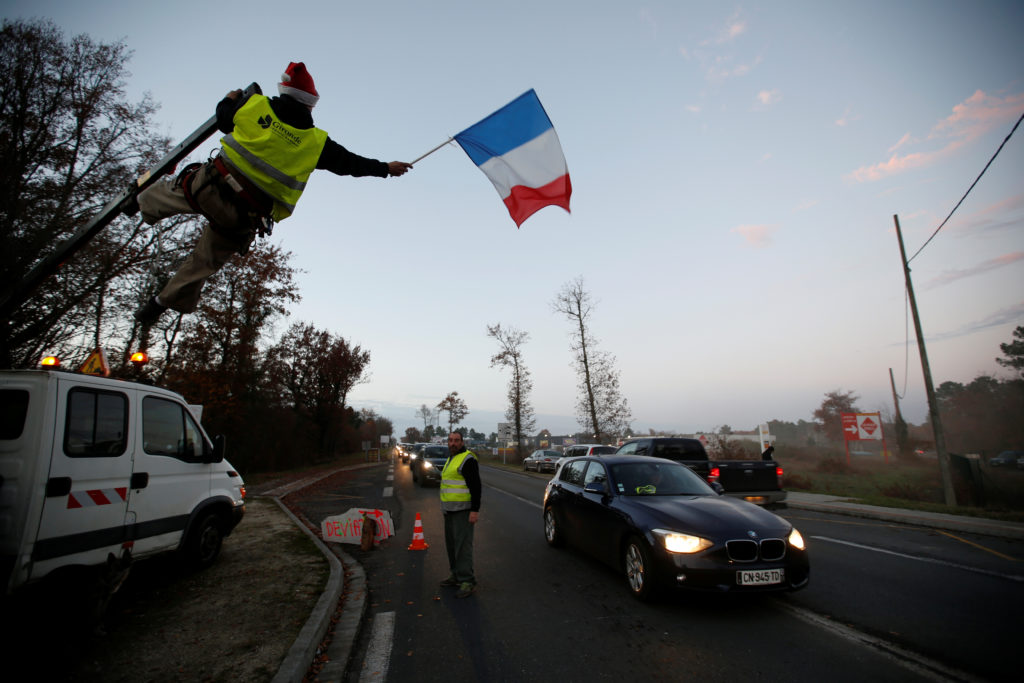 At Tolbiac University in downtown Paris, students took over a school building and classes were canceled.

“We need taxes, but they are not properly redistributed,” protester Thomas Tricottet told BFM television.

The high school students’ FIDL union called for “massive” protests on Thursday and urged France’s education minister to step down.

One student was injured during protests at a high school in Saint-Jean-de-Braye in north-central France. BFM said he was shot in the head with a rubber bullet. Julien Guiller, a spokesman for the regional school administration, told the AP the student was expected to survive.

Until he scrapped the fuel tax rise, Macron’s actions after returning from the G-20 summit in Argentina had done little to reassure protesters that he was listening to their concerns.

He has refrained from speaking publicly about the protests and has largely remained in his palace. On Tuesday night, he was jeered as he traveled to a regional government headquarters that was torched by protesters last weekend.

One activist said Wednesday that he fears more deaths if Saturday’s yellow vest demonstration in Paris goes ahead and urged Macron to speak out and calm the nation.

“If not there will be chaos,” said Christophe Chalencon. The 52-year-old blacksmith from southern France told the AP the French public needs Macron to “admit he made a mistake, with simple words … that touch the guts and heart of the French.”

In a disparaging tweet, U.S. President Donald Trump claimed that Macron’s decision on Tuesday to delay the gas tax hike showed that the French leader doesn’t believe in the 2015 Paris global climate accord.

The Trump tweet came as thousands of climate experts were meeting in Poland to work out national responsibilities in the fight to reduce emissions and slow global warming.

Why Senate reaction to CIA Khashoggi briefing is ‘unprecedented’