Paris celebrates its liberation from Nazis, 75 years on

PARIS — Paris celebrated the American soldiers, French Resistance fighters and others who liberated the City of Light from Nazi occupation exactly 75 years ago on Sunday, unleashing an eruption of kissing, dancing, tears and gratitude.

Firefighters unfurled a huge French flag from the Eiffel Tower, recreating the moment when a French tricolor stitched together from sheets was hoisted atop the monument 75 years ago to replace the swastika flag that had flown for four years.

Dozens of World War II-era jeeps, armored vehicles, motorcycles and trucks and people dressed in wartime uniforms and dresses paraded through southern Paris, retracing the entry of French and U.S. tanks into the city on Aug. 25, 1944 .

Among those watching the parade was Roger Acher, 96, one of the few surviving veterans, who entered Paris with Gen. Philippe Leclerc de Hauteclocque’s 2nd armored division around dawn that day. Fighting was fierce as they moved toward the city, he recalled. “I almost got killed.” 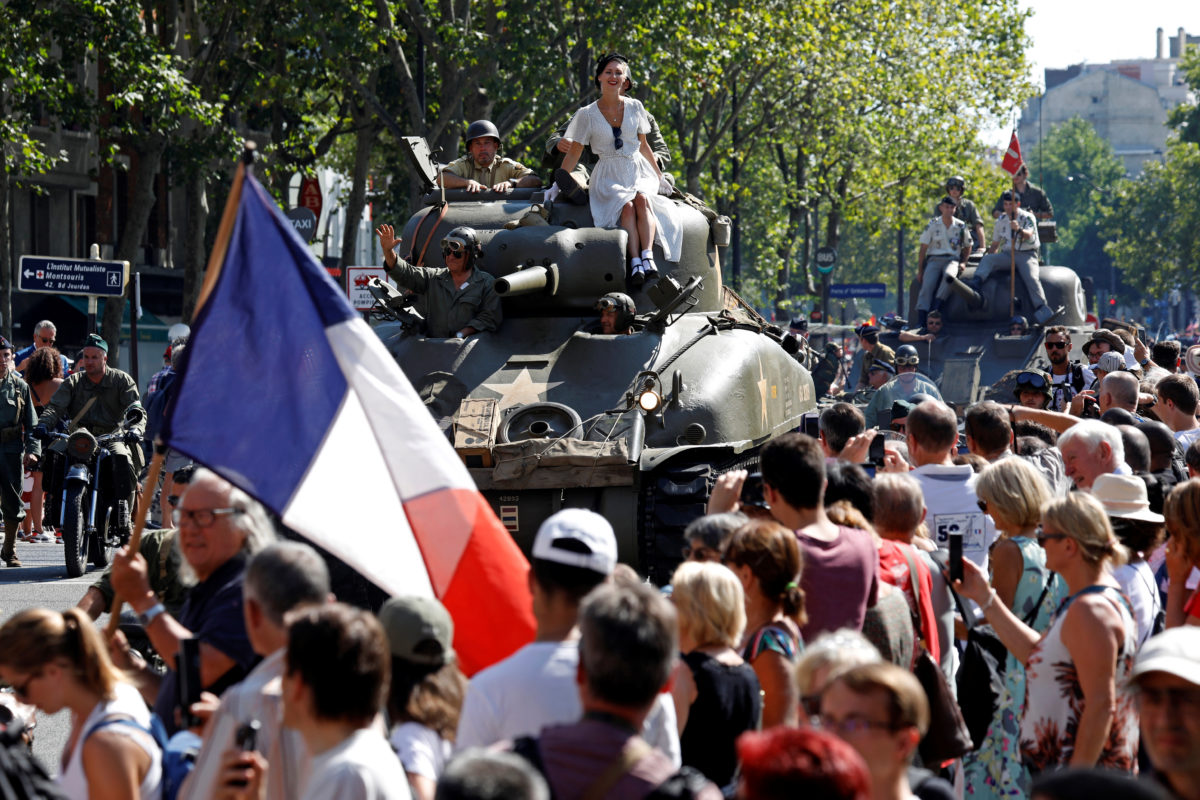 Vintage military vehicles and reenactors take part in a reenactment of the liberation of Paris from German occupation to celebrate its 75th anniversary, in Paris, France, August 25, 2019. Photo by Charles Platiau/Reuters.

A Dixieland band standing on an army truck played at the end of the parade, which wrapped up at the site of a new museum about the liberation and the French Resistance .

Long the jewel of European cities, Paris suffered relatively little damage in World War II, but its citizens were humiliated, hungry and mistrustful after 50 months under the Nazis.

The liberation of Paris was both joyous and chaotic. It was faster and easier for the Allies than their protracted battle through Normandy and its gun-filled hedgerows. But the fight for the French capital killed nearly 5,000 people, including Parisian civilians, German troops and members of the French Resistance whose sabotage and attacks had prepared the city for the liberation.

After invading in 1940, the Nazi hierarchy ensconced themselves in Paris’ luxury hotels, and hobnobbed at theaters and fine restaurants. Collaborationist militias kept order, and French police were complicit in the most dastardly act of the Occupation: the 1942 roundup of around 13,000 Jews at the Vel d’Hiv bicycle stadium before their eventual deportation to the Auschwitz death camp in German-occupied Poland.

The Parisians who weren’t deported or didn’t flee used ration tickets to eat, wooden soles on shoes to replace scarce leather and sometimes curtains for clothes. The black market thrived.

The D-Day landings on June 6, 1944, helped change the tide of the war, allowing the Allies to push through Normandy and beyond to other German-occupied lands around Western Europe.

The message went out to the French Resistance in Paris that the Allies were advancing. Resistance member Madeleine Riffaud, now 95, described to The Associated Press killing a Nazi soldier on July 23, 1944, on a Paris bridge. Riffaud was spotted as she escaped on her bicycle, then arrested, tortured and jailed before being freed in a prisoner exchange days before the liberation of the city.

“To carry out an action like that isn’t playing with dolls,” she said.

The German military governor of Paris, Gen. Dietrich von Choltitz, was arrested at his headquarters at the Meurice Hotel and signed the surrender.

A group of U.S. World War II veterans is back in Paris for Sunday’s events. They described to the AP their memories, some brought to tears by the horrors of the Nazi regime.

Steve Melnikoff, 99, of Cockeysville, Maryland, came ashore on Omaha Beach on D-Day. He calls war “nasty, smelly, terrible.” But he maintains that “it was important for someone to do this,” to stop Hitler from taking over more of the world.

Harold Radish, 95, arrived in France in 1944, fought his way to Germany — and then was captured. After he was freed, he visited Paris. He described the liberated city as “a new thing. Something good had changed, the world was gonna get a little better.”

Images of Parisian women kissing American soldiers on liberation day have imprinted themselves on later generations.

AP reporter Don Whitehead, who was in Paris on Aug. 25, 1944, described both the exaltation and the violence that punctuated the day.

“When the last enemy resistance crumbled at the gate to Paris, then this heart of France went mad … Men and women cried with joy. They grabbed the arms and hands of soldiers and cheered until their voices were hoarse. When the column stopped I was smothered, but pleasantly, with soft arms and lips giving not one kiss but the usual French double one,” he continued.

“One old man came up, saluted, and said with tears in his eyes: ‘God bless America. You have saved France.'”

Deborah Gouffran contributed to this report.

Left: Vintage military vehicles and reenactors take part in a reenactment of the liberation of Paris from German occupation to celebrate its 75th anniversary, in Paris, France, August 25, 2019. Photo by Charles Platiau/Reuters.