PARIS — A catastrophic fire engulfed the upper reaches of Paris’ soaring Notre Dame Cathedral as it was undergoing renovations Monday, threatening one of the greatest architectural treasures of the Western world as tourists and Parisians looked on aghast from the streets below. France’s Interior Ministry said firefighters might not be able to save the structure.

France’s Interior Ministry said firefighters might not be able to save the structure.

The blaze collapsed the cathedral’s spire and spread to one of its landmark rectangular towers. A spokesman said the entire wooden frame of the cathedral would likely come down, and that the vault of the edifice could be threatened too.

“Everything is burning, nothing will remain from the frame,” Notre Dame spokesman Andre Finot told French media. The 12th-century cathedral is home to incalculable works of art and is one of the world’s most famous tourist attractions, immortalized by Victor Hugo’s 1831 novel “The Hunchback of Notre Dame.” 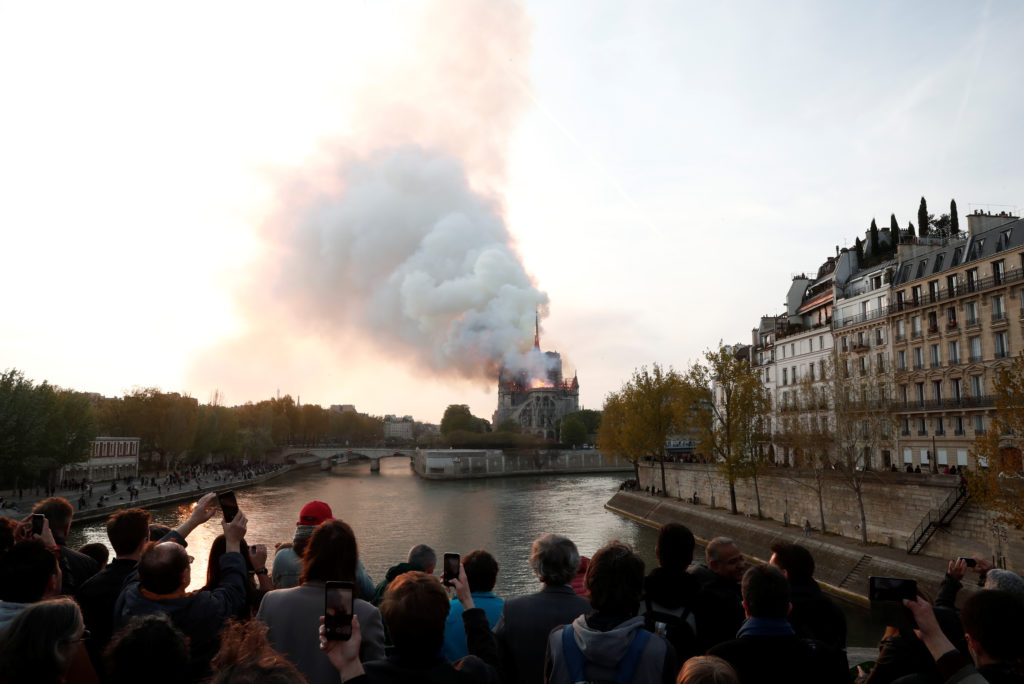 Smoke billows from Notre Dame Cathedral after a fire broke out, in Paris, France April 15, 2019. Photo by Benoit Tessier/Reuters

The cause of the blaze was not known, but French media quoted the Paris fire brigade as saying the fire is “potentially linked” to a 6 million-euro ($6.8 million) renovation project on the church’s spire and its 250 tons of lead. Prosecutors opened an investigation as Paris police said there were no reported deaths. Some 400 firefighters were battling the blaze well into the night.

Flames shot out of the roof behind the nave of the cathedral, among the most visited landmarks in the world. Hundreds of people lined up bridges around the island that houses the cathedral, watching in shock as acrid smoke rose in plumes.

The fire came less than a week before Easter amid Holy Week commemorations. As the cathedral continued to burn, Parisians gathered to pray and sing hymns outside the church of Saint Julien Les Pauvres across the river from Notre Dame, as the flames lit the sky behind them.

French President Emmanuel Macron was treating the fire as a national emergency, rushing to the scene and straight into meetings at the Paris police headquarters nearby. Paris Archbishop Michel Aupetit invited priests across France to ring church bells in a call for prayers for the beloved Paris cathedral. 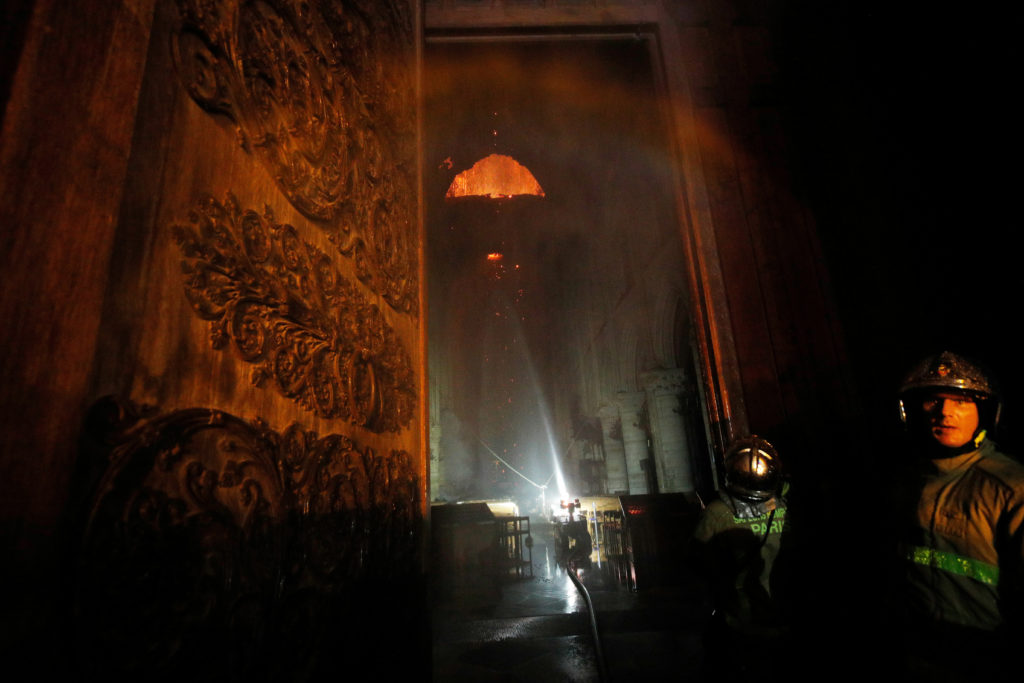 Paris Fire brigade members are seen at an entrance that looks into the Notre Dame Cathedral as a fire continues to burn in Paris, France, on April 15, 2019. Photo by REUTERS/Philippe Wojazer

Built in the 12th and 13th centuries, Notre Dame is the most famous of the Gothic cathedrals of the Middle Ages as well as one of the most beloved structures in the world. Situated on the Ile de la Cite, an island in the Seine river, the cathedral’s architecture is famous for, among other things, its many gargoyles and its iconic flying buttresses.

Among the most celebrated artworks inside are its three stained-glass rose windows, placed high up on the west, north and south faces of the cathedral. Its priceless treasures also include a Catholic relic, the crown of thorns, which is only occasionally displayed, including on Fridays during Lent.

“It’s been 800 years that the Cathedral watches over Paris”, Pascal said. “Happy and unfortunate events for centuries have been marked by the bells of Notre Dame.”

He added: “We can be only horrified by what we see.”

Associated Press reporters at the scene saw massive plumes of yellow brown smoke filling the air above the Cathedral and ash falling on the island that houses Notre Dame and marks the center of Paris. As the spire fell, the sky lit up orange. 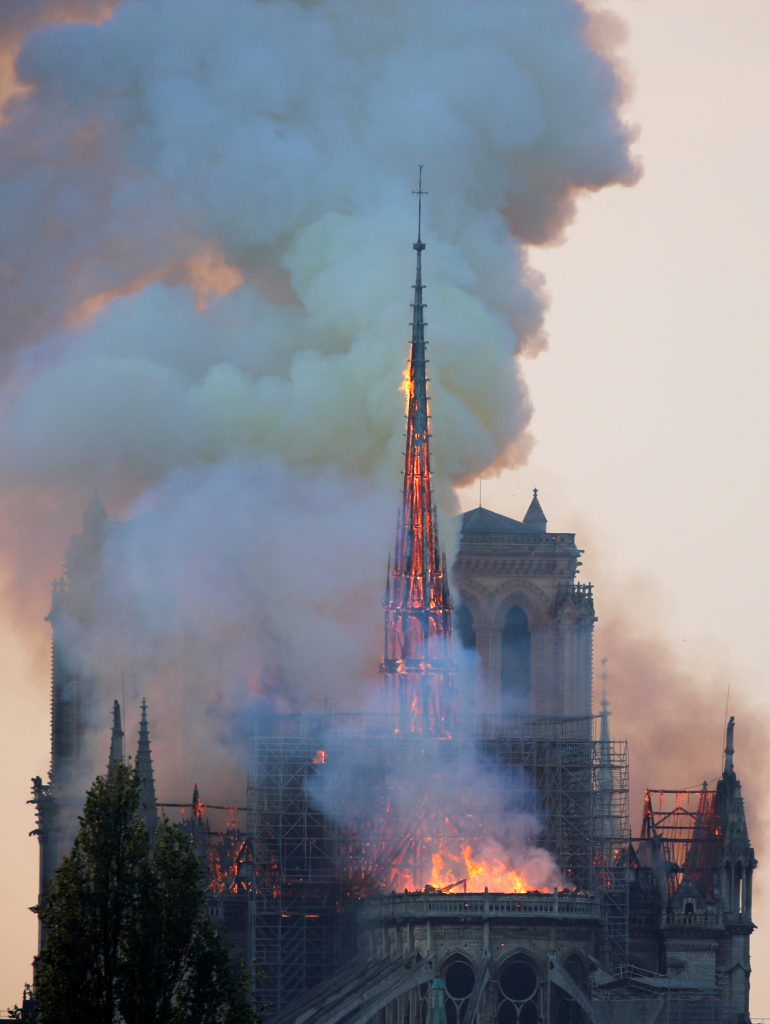 Paris Mayor Anne Hidalgo is in despair at the “terrible fire.” Hidalgo said in a Twitter message that Paris firefighters are still trying to limit the fire and urged Paris citizens to respect the security perimeter that has been set around the cathedral.

Hidalgo said Paris authorities are in touch with the Paris diocese.

Reactions from around the world came swiftly including from the Vatican, which released a statement expressing shock and sadness for the “terrible fire that has devastated the Cathedral of Notre Dame, symbol of Christianity in France and in the world.”

In Washington, Trump tweeted: “So horrible to watch the massive fire at Notre Dame Cathedral in Paris” and suggested first responders use “flying water tankers” to put it out.

Cardinal Timothy Dolan, the archbishop of New York, said he was praying “to ask the intercession of Notre Dame, our Lady, for the Cathedral at the heart of Paris, and of civilization, now in flames! God preserve this splendid house of prayer, and protect those battling the blaze.”