TAGAYTAY, Philippines (AP) — A volcano near the Philippine capital spewed lava into the sky and trembled constantly Tuesday, possibly portending a bigger and more dangerous eruption, as tens of thousands of people fled villages darkened and blanketed by heavy ash.

Government work was suspended and schools were closed in a number of towns and cities, including Manila, because of health risks from the ash. Hundreds of flights were canceled or delayed, affecting tens of thousands of passengers.

The continued restiveness of the Taal volcano and several new fissures in the ground nearby likely mean magma is rising and may lead to further eruptive activity, the Philippine Institute of Volcanology and Seismology said.

The volcano was spurting fountains of red-hot lava 800 meters (half a mile) into the sky, and the massive column of ash and volcanic debris at times lit up with streaks of lightning.

The alert level since the eruption began Sunday has been 4, indicating a hazardous eruption is possible in hours to days. Level 5, the highest, means such an eruption is underway. 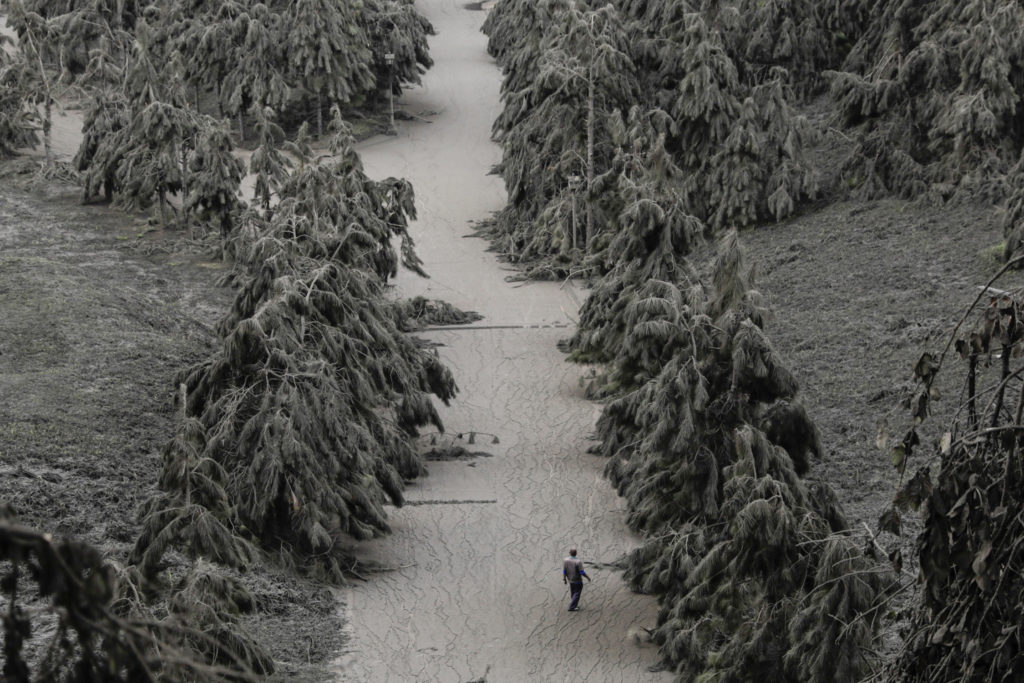 A man walks on a road blanketed with volcanic ash from the erupting Taal Volcano in Tagaytay, Philippines, January 14, 2020. Photo by Eloisa Lopez/Reuters

About 50 volcanic earthquakes were detected over eight hours Tuesday, indicating rising magma, the institute said. It also warned that heavy and prolonged ash fall was possible in nearby villages.

“The speed in the rise of magma is important (in determining) when the volcano will have a strong eruption and if it will slow down and freeze,” said Renato Solidum, who heads the institute. “As of now, we don’t see activities slowing down and the earthquakes still continue.”

The picturesque volcano in the middle of a lake in Batangas province south of Manila rumbled to life Sunday in a powerful explosion that blasted a 15-kilometer (9-mile) column of ash, steam and rock into the sky. Clouds of volcanic ash blowing over Manila, 65 kilometers (40 miles) to the north, closed the country’s main airport Sunday and part of Monday until the ash fall eased.

More than 500 international and domestic flights were canceled or delayed due to the overnight airport closure, affecting about 80,000 passengers, airport manager Ed Monreal told The Associated Press.

“Hopefully the wind direction does not change. As long as the ash fall does not reach us, then we can be back to normalcy,” Monreal said.

The disaster-response agency counted more than 40,000 evacuees in Batangas and nearby Cavite provinces who took shelter in nearly 200 evacuation centers. Officials expected the number to swell.

Solidum warned residents from returning to high-risk villages based on perceptions that the eruption was easing. He warned of pyroclastic flows, super-heated material from the volcano that can travel at great speed and incinerate anything in their path.

Solidum said it would take time for Taal’s restiveness to ease and the lives of affected villagers to return to normal but added it’s difficult to predict the volcano’s behavior with certainty.

“We have to make sure that people understand and, of course, government, that this is not an activity that will just be a short while,” Solidum told a news conference. 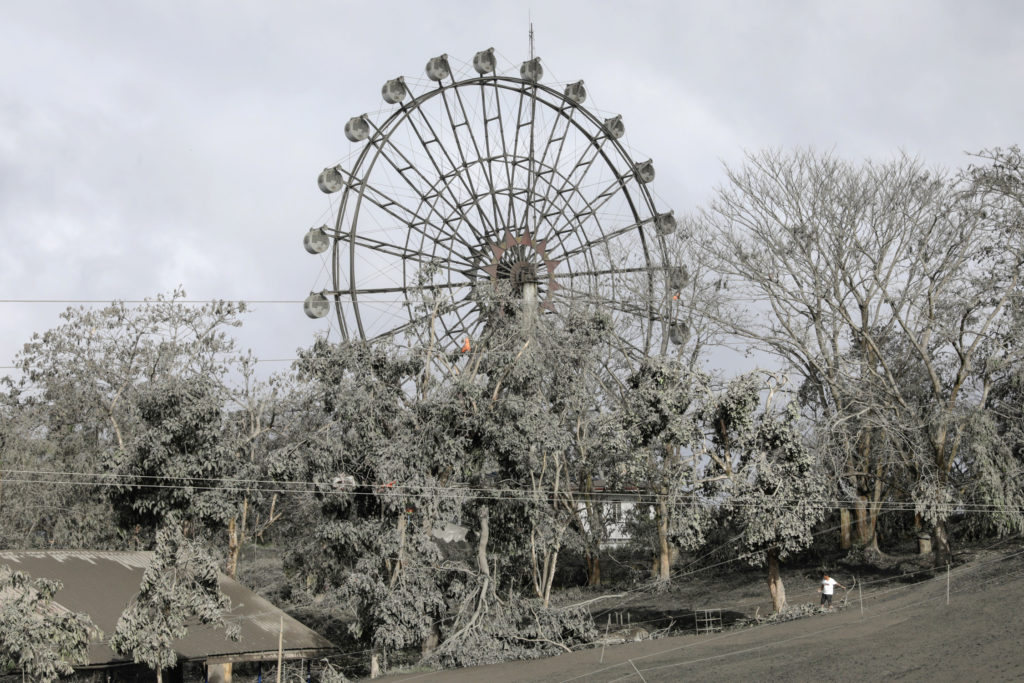 A ferris wheel is covered with volcanic ash in a park in Tagaytay City, Philippines, January 14, 2020. Photo by Eloisa Lopez/Reuters

President Rodrigo Duterte visited hard-hit Batangas, which has been declared a calamity zone for faster disbursement of emergency funds. Accompanied by top disaster-response officials and Cabinet members, he promised the national government would help with the cleanup and reconstruction of the devastated province once the eruption ends.

The government disaster-response agency has not provided details of damage but journalists saw dozens of houses ruined by heavy ash and frequent quakes in two Batangas areas.

At least six people have been taken to a hospital in Tagaytay city in Cavite due to respiratory ailments caused by the ash, Health Secretary Francisco Duque III said.

The eruption has not directly caused deaths or major damage. The death of a driver in a crash on an ash-covered road was linked to slippery conditions.

The small island where the 1,020-foot (311-meter) volcano lies has long been designated a “permanent danger zone,” though fishing villages have long existed there. Those villages were all evacuated, though volcanology officials have called for a total evacuation of endangered communities within a 14-kilometer (8.7-mile) radius of Taal.

Taal’s last disastrous eruption, in 1965, killed hundreds of people. It is the second-most restive of about two dozen active volcanoes in the Philippines, which lies along the Pacific “Ring of Fire,” where much of the world’s seismic activity occurs.

A long-dormant volcano, Mount Pinatubo, blew its top north of Manila in 1991 in one of the biggest volcanic eruptions of the 20th century, killing hundreds of people.

Gomez reported from Manila. Associated Press journalists Celine Rosario and Kiko Rosario in Manila and Aaron Favila in Tagaytay contributed to this report.

News Wrap: Erupting volcano in the Philippines forces residents from their homes