Plane crashes into homes in Congo; at least 26 dead

GOMA, Congo — A small plane crashed into homes shortly after takeoff Sunday in Congo’s eastern city of Goma, killing 26 people, including the aircraft’s passengers and crew, as well as residents on the ground, the government of the central African nation said.

The 19-seat Dornier 228-200, owned by private carrier Busy Bee, was headed to Beni, about 350 kilometers (220 miles) north of Goma, when it crashed in the Mapendo district near the airport in the North Kivu province, according to the government.

Black smoke rose from the plane wreckage and destroyed homes as dozens of men tried to help with rescue efforts. The smoke cleared as the men carried bodies on stretchers and hundreds gathered at the site. 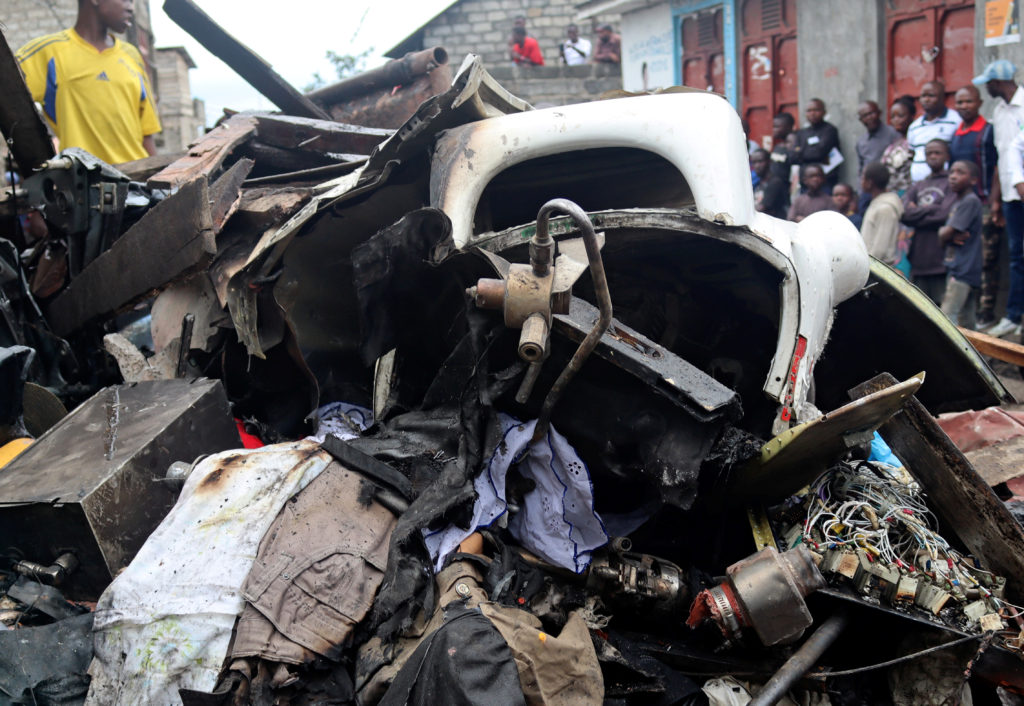 Civilians gather at the site where a Dornier 228-200 plane operated by local company Busy Bee crashed into a densely populated neighborhood in Goma, eastern Democratic Republic of Congo November 24, 2019. Photo by Fiston Mahamba/Reuters.

Although the National Border Health Program initially said there were two survivors from the plane, including a crew member, the provisional death toll was later put at 26 — 17 passengers, two crew members and seven residents of the homes, the Ministry of Transportation said after collecting information from other government departments.

Placide Kambale, a local pilot, said he rushed to the scene to help out and saw that the plane was on fire.

“I called other young people from the neighborhood. They helped me to try to remove those who still moved,” he said. “We have managed to recover two that was quickly sent to the hospital” before the fire spread.

The U.N. mission in Congo said it sent an Emergency Crash and Rescue team with two fire engines to support Congolese authorities.

The government extended its condolences to the families of those killed.

Plane crashes are frequent in the central African nation of Congo because of poor maintenance and lax air safety standards. None of Congo’s commercial carriers, including Busy Bee, are allowed to fly into European Union airspace because of safety concerns.

Left: Rescuers and civilians gather at the site where a Dornier 228-200 plane operated by local company Busy Bee crashed into a densely populated neighborhood in Goma, eastern Democratic Republic of Congo November 24, 2019. Photo by Fiston Mahamba/Reuters.