Pompeo dismisses North Korea’s rejection of him as U.S. negotiator

WASHINGTON — Secretary of State Mike Pompeo on Friday rejected a North Korean demand that he be replaced as President Donald Trump’s top negotiator, as the United States and Japan vowed to continue to enforce tough sanctions on North Korea until it dismantles its nuclear weapons and ballistic missile programs.

Pompeo’s refusal to step down and the joint U.S.-Japanese pledge made at a meeting of their foreign and defense ministers at the State Department threw more uncertainty over the possible resumption of stalled denuclearization talks. The talks have been at an impasse over sanctions since Trump’s second summit with North Korean leader Kim Jong Un ended without any agreement in late February, and the North has warned it may not return to the table without immediate sanctions relief.

“Nothing changed, we’re continuing to work. I’m still in charge of the team,” Pompeo told reporters, insisting that he and his special envoy for North Korea Stephen Biegun would remain on the job.

“President Trump is obviously in charge of the overall effort, but it will be my team and special representative Biegun who will continue to lead the U.S. efforts to achieve what Chairman Kim committed to do,” he said. “He’s made that commitment to President Trump multiple times, he’s made it to me personally half a dozen times and I am convinced we still have a real opportunity to achieve that outcome and our diplomatic team will continue to remain in the lead.”

Pompeo’s comments — at a news conference with acting Defense Secretary Patrick Shanahan, Japanese Foreign Minister Taro Kono and Defense Minister Takeshi Iwaya — were his first response to the North Korean demand, which followed an announcement by Pyongyang on Thursday that it had tested a new tactical weapon. The test, along with the North’s criticism of Pompeo for “talking nonsense” and misrepresenting Kim’s positions, signaled a hardening stance and cast doubt on a quick resumption of negotiations.

Pompeo, Shanahan, Kono and Iwaya all said that they would not bow to North Korea’s sanctions relief demands.

Kono said Friday’s meeting came at “a critical time to align the response to the North Korean situation,” noting that Japanese Prime Minister Shinzo Abe will travel to the U.S. to meet Trump next week and that Trump will soon visit Japan. “Japan and the United States will continue to cooperate on full implementation of all U.N. Security Council resolutions,” he said in reference to international sanctions the world body has imposed on the North. 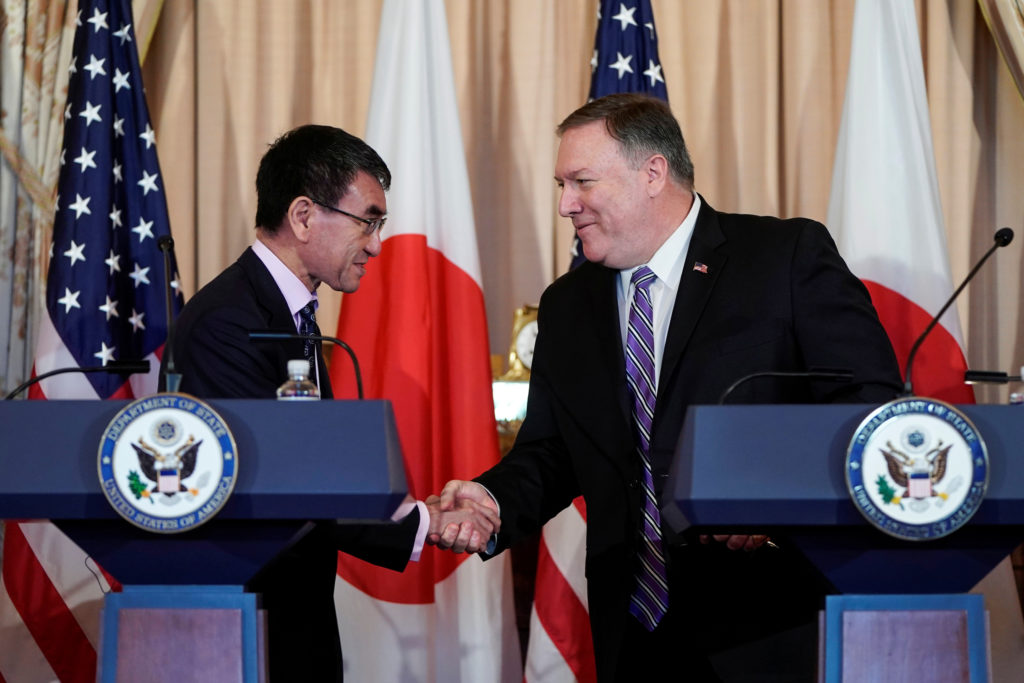 The U.S. is refusing to ease major sanctions until North Korea completely and verifiably dismantles its nuclear weapons and long-range ballistic missiles while the North wants significant sanctions to be lifted before the process is completed.

Japan has also advocated a tough approach to the North in contrast to South Korea, which has pushed for a step-by-step approach that would lift some international sanctions as incentives. Pompeo has said some minor relief, including the possible easing of travel restrictions, could be considered in the short- to medium-term but that the crippling sanctions the North most wants removed will not be lifted until it fulfills what he says have been Kim’s repeated pledges to Trump to completely denuclearize.

On Thursday, North Korea said it had test-fired a new type of “tactical guided weapon,” its first such test in nearly half a year, and demanded that Pompeo be excluded from future negotiations. Although the test didn’t appear to be of a banned mid- or long-range ballistic missile that could scuttle chances of resuming the negotiations, it allowed North Korea to show its people it is pushing ahead with weapons development and reassuring hardline military officials worried that diplomacy with Washington is a sign of weakness.

North Korea’s foreign ministry accused Pompeo of playing down the significance of comments by Kim, who said last week that Washington has until the end of the year to offer mutually acceptable terms for an agreement to salvage the high-stakes nuclear diplomacy. In a statement, the director general of the American Affairs Department Kwon Jong Gun said that Pompeo was “talking nonsense” and misrepresenting Kim’s comments.

During a speech at Texas A&M University on Monday, Pompeo said Kim promised to denuclearize during his first summit with President Donald Trump and that U.S. officials were working with the North Koreans to “chart a path forward so we can get there.”

“He (Kim) said he wanted it done by the end of the year,” Pompeo said. “I’d love to see that done sooner.”

The North Korean statement said Pompeo was “misrepresenting the meaning of our requirement” for the negotiations to be finalized by the year’s end, and referred to his “talented skill of fabricating stories.” It said Pompeo’s continued participation in the negotiations would ensure that the talks become “entangled” and called for a different counterpart who is “more careful and mature in communicating with us.”

Last week, in a speech before his rubber-stamp parliament, Kim said he is open to a third summit with Trump, but only if the United States changes its stance on sanctions enforcement and pressure by the end of the year.

Left: U.S. Secretary of State Mike Pompeo poses with Vice Chairman of the North Korean Workers' Party Committee Kim Yong Chol, North Korea's lead negotiator in nuclear diplomacy with the United States, as they start talks aimed at clearing the way for a second U.S.-North Korea summit while meeting at a hotel in Washington, U.S., January 18, 2019. Photo by REUTERS/Joshua Roberts