5 key takeaways from the Mueller report

Robert Mueller concluded that President Donald Trump did not collude with Russia during the 2016 election. But in the special counsel’s full report, which was released Thursday with some redactions, Mueller provided significant evidence of Trump trying to interfere in the investigation, though Mueller stopped short of concluding he’d obstructed justice.

“If we had confidence after a thorough investigation of the facts that the President clearly did not commit obstruction of justice, we would so state. Based on the facts and the applicable legal standards, we are unable to reach that judgment,” Mueller wrote.

In his summary of the report, Attorney General William Barr wrote that the lack of evidence that Trump colluded with Russia “bears upon the President’s intent with respect to obstruction.”

Mueller contradicted that claim, which formed an important part of Barr’s basis for concluding that Trump did not obstruct justice. 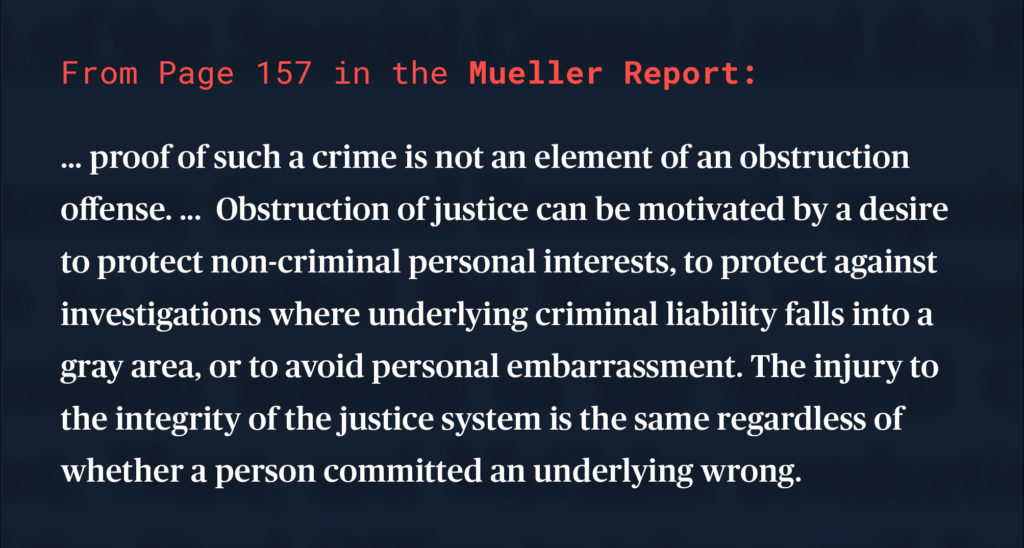 “Proof of such a crime is not an element of an obstruction offense,” Mueller wrote. The report cited a 2017 appeals court decision which held that in criminal cases, obstruction is “punishable even if the prosecution is ultimately unsuccessful or even if the investigation ultimately reveals no underlying crime.”

The special counsel investigation was not a traditional criminal proceeding. Nevertheless, Mueller noted, “the injury to the integrity of the justice system is the same regardless of whether a person committed an underlying wrong.”

The message to Congress seemed clear: Lawmakers could conclude Trump was guilty of obstruction, even if he did not conspire with Russia during the 2016 election.

“The conclusion that Congress may apply the obstruction laws to the President’s corrupt exercise of the powers of office accords with our constitutional system of checks and balances and the principle that no person is above the law,” Mueller wrote.

Trump pressured witnesses not to cooperate with the investigation

Trump tried to coerce key witnesses, by turns praising or attacking them to try to exact loyalty and protect himself during the investigation.

The president praised Paul Manafort, his onetime campaign chair, repeatedly and dangled the idea of issuing him a pardon, Mueller wrote, in an apparent effort to convince him not to cooperate fully with the investigation. Trump’s public remarks about Manafort were also intended to influence the jury presiding over Manafort’s two federal trials, the special counsel wrote.

Trump’s personal legal team repeatedly told the president’s longtime attorney, Michael Cohen, that he would have the president’s support so long as he maintained that Trump had done nothing wrong. Trump’s later attacks against Cohen, after Cohen had agreed to cooperate with the investigation, could be interpreted as attempts by the president to get Cohen to limit his cooperation with federal prosecutors, Muller wrote.

“There is evidence that could support the inference that the president intended to discourage Cohen from cooperating with the government,” Mueller wrote, adding later that the president “may have been concerned about the information that Cohen could provide as a witness.”

In describing these actions, Mueller painted a portrait of a president who was nervous about what his former advisers might say, and who was willing to intervene repeatedly and pressure them to conceal the truth.

Trump asked senior officials to lie or mislead the public

On several occasions, the president either directly or indirectly asked senior administration officials to lie. This included an effort to persuade Rod Rosenstein, the deputy attorney general, to claim that it was his idea, not the president’s, to fire FBI Director James Comey in 2017.

Trump also asked Don McGahn, the former White House counsel, to refute press accounts that he had instructed McGahn to fire the special counsel. McGahn refused, telling the president that the sequence of events as portrayed in those stories were true.

The president also dictated a statement for his son, Donald Trump, Jr., that lied about the purpose of the meeting Trump Jr. arranged at Trump Tower in New York with a Russian official. Mueller concluded that the president’s false statement was “press strategy,” and did not rise to the level of obstruction of justice. Still, it confirmed press accounts that Trump misled the public about a meeting his campaign held with a Russian promising damaging information about Hillary Clinton.

Trump claimed that he never asked McGahn to fire Mueller. But after considering the evidence, Mueller dismissed the president’s claims.

The report details several conversations between the president and McGahn in which, according to the White House lawyer, Trump made clear that he wanted McGahn to have Mueller removed in order to protect himself from further legal trouble.

“The president sought to use his official powers to remove the Special Counsel,” the report noted.

The president never followed through. But that blunt line could give Democrats ammunition to argue that Trump tried to fire Mueller — a step that both Democrats and Republicans have said would have triggered a constitutional crisis.

On numerous occasions, Trump’s senior aides refused to carry out his orders out of concern that the president was directing them to do something wrong, such as lie, or make other public statements they weren’t comfortable with.

In other instances, aides told Trump they would fulfill his instructions, and then ignored them and hoped that the president would not ask again.

In the end of the report, Mueller did not mince words.

The “president’s efforts to influence the investigation were mostly unsuccessful, but that is largely because the persons who surrounded the president declined to carry out orders or accede to his requests,” Mueller wrote.

He added: “The president engaged in a series of targeted efforts to control the investigation.”