Pompeo in Saudi Arabia amid heightened tensions with Iran

DUBAI, United Arab Emirates (AP) — U.S. Secretary of State Mike Pompeo held talks Monday with the Saudi king and crown prince after days of mounting tensions following the downing of a U.S drone last week and after President Donald Trump pulled back from the brink of retaliatory military strikes on Iran.

The U.S. denies the drone, valued at more than $100, million violated Iranian airspace. Trump said he backed away from planned strikes after learning that 150 people would be killed but that military action remained an option.

WATCH: Possibility of war with the U.S. leaves Iranians ‘rattled’

On Monday, Pompeo held separate talks with King Salman and Crown Prince Mohammed bin Salman in the Saudi port city of Jiddah to discuss the escalation with Iran.

Pompeo wrote on Twitter that he had a “productive meeting” with King Salman and discussed “heightened tensions in the region and the need to promote maritime security” in the Strait of Hormuz near the Persian Gulf, through which roughly a fifth of the world’s traded oil passes.

Productive meeting with King Salman bin Abdulaziz Al Saud today to discuss heightened tensions in the region and the need to promote maritime security in the Strait of Hormuz. Freedom of navigation is tantamount. pic.twitter.com/BpEOqMpUaA

From the kingdom, Pompeo will travel to neighboring United Arab Emirates, another close U.S. ally. The regional stops, made on his way to India, may be aimed at reassuring Washington’s Sunni Gulf Arab allies that the White House remains committed to maintaining pressure on Shiite Iran following Trump’s last-minute about face, which likely raised questions about U.S. willingness to use force against the Islamic Republic.

In what it says are defensive moves, the U.S. has built up its military presence around the Persian Gulf in recent weeks.

Iran’s naval commander, Rear Adm. Hossein Khanzadi issued a warning to Washington that Tehran is capable of shooting down other American spy drones that violate Iranian airspace. Khanzadi spoke Monday during a meeting with a group of defense officials in Iran.

“We confidently say that the crushing response can always be repeated, and the enemy knows it,” Khanzadi was quoted as saying by the semi-official Tasnim news agency.

Tensions have been escalating since Trump last year withdrew the U.S. from a global nuclear deal with Iran and re-imposed economic sanctions on Iran. A fresh round of U.S. sanctions is to be announced later on Monday in a bid to force the Iranian leadership into talks.

Iran has decried the U.S. sanctions, which essentially bar Iran from selling its oil internationally, as “economic terrorism.”

The hastily arranged Saudi visit by Pompeo, considered a hard-liner in the Trump administration, and the upcoming stop in the UAE come as both countries have expressed alarm over Iran’s military reach.

Saudi Arabia and the U.S. have accused Iran of being behind attacks on oil tankers near the Persian Gulf over the past several weeks, while the UAE has been urging diplomacy to avert a wider conflict.

On the eve of Pompeo’s visit to the kingdom, Yemen’s Iranian-allied rebels attacked a Saudi airport near the Saudi-Yemen border, killing a Syrian resident and wounding 21 other civilians, the Saudi military said.

The Houthi rebels claimed they used bomb-laden drones in the attack on the Abha airport, the second in less than two weeks. Drones were also used to attack a Saudi oil pipeline last month.

Saudi Arabia has been at war with the rebel Houthis in Yemen for more than four years. The Houthis say the attacks targeting the kingdom are a response to relentless Saudi airstrikes on Yemen that have killed thousands.

Before his departure to Saudi Arabia, Pompeo said talks will include discussion on “how we can build out a global coalition, a coalition not only throughout the Gulf states, but in Asia and in Europe… to push back against the world’s largest state sponsor of terror,” referring to Iran.

But even as Pompeo delivered his tough talk, he echoed Trump in saying the U.S. is prepared to negotiate with Iran, without preconditions, in a bid to ease tensions.

“They know precisely how to find us,” Pompeo said. 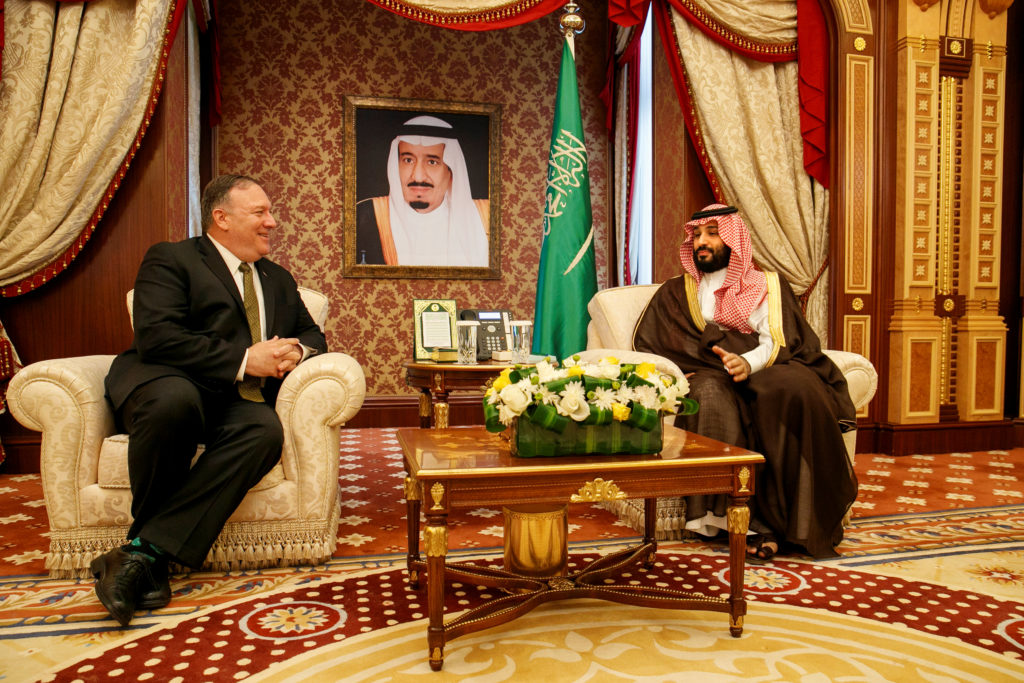 Throughout the recent crisis, Trump has wavered between bellicose language and actions toward Iran and a more accommodating tone, including an offer for negotiations. Iran has said it is not interested in a dialogue with Trump.

Trump initially said Iran had made a “very big mistake” and that it was “hard to believe” that shooting down the drone last Thursday was not intentional. But he also said over the weekend that he appreciated Iran’s decision to not shoot down a manned U.S. spy plane carrying 30 people.