VATICAN CITY (AP) — Praying in a desolately empty St. Peter’s Square, Pope Francis on Friday likened the coronavirus pandemic to a storm laying bare illusions that people can be self-sufficient and instead leaves “all of us fragile and disoriented” and needing each other’s help and comfort.

Francis stood under a canopy erected on the steps of St. Peter’s Basilica while leading a special prayer service as rain soaked the usually crowded cobblestone square. “Open our hearts to hope,” he said in his opening prayer.

“Lord, may you bless the world, give health to our bodies and comfort our hearts,” he prayed

At the end of the hour-long ceremony, he delivered a blessing that is traditionally reserved for the holy days of Christmas and Easter.

Wearing a simple white cassock, Francis climbed the sloping steps of the square by himself until he neared a canopied platform that had been erected to shelter him from the elements, taking the arm of an aide for the last steps.

Francis referred to the 17th-century colonnade that delineates St. Peter’s Square while praying, “From this colonnade that embraces Rome and the whole world, may God’s blessing come down upon you as a consoling embrace.” 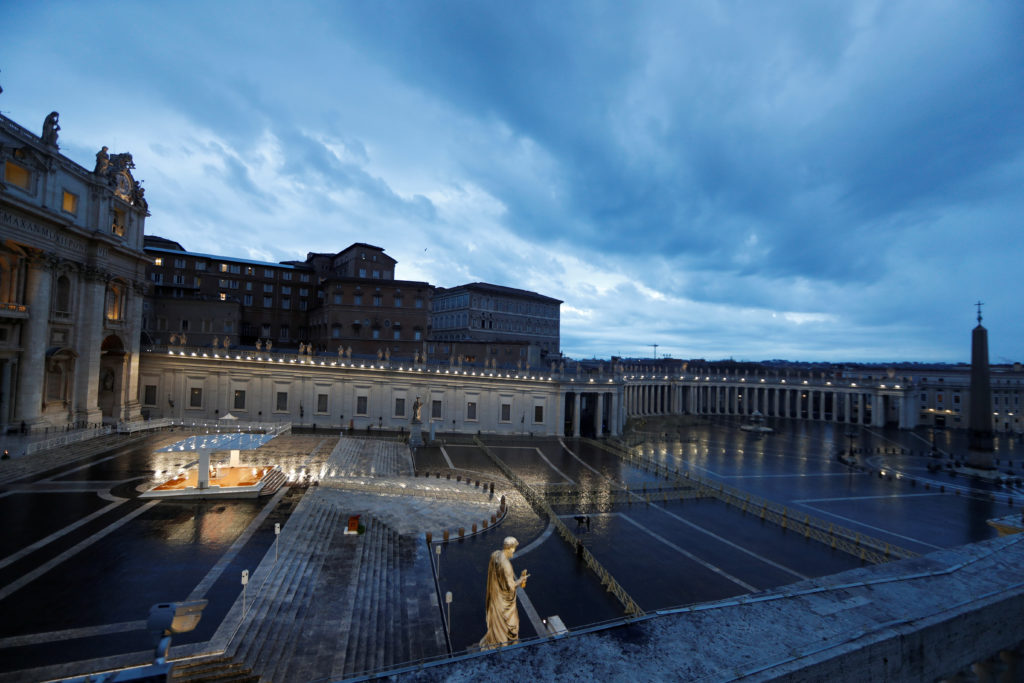 Pope Francis at the Vatican, March 27, 2020. Photo by REUTERS/Yara Nardi/Pool

He compared the viral outbreak plaguing Italy and much of the world to an “unexpected, turbulent storm.”

“We have realized that we are on the same boat, all of us fragile and disoriented, but at the same time important and needed, all of us now called to row together, each of us in need of comforting each other,” the pope said.

Before the pandemic, Francis said, people were rushing through life, “greedy for profit,” undisturbed by “wars and injustices” and not hearing the “cry of the poor or of our ailing planet. We carried on regardless, thinking we would stay healthy in a world that was sick.”

Then, moving to a temporary altar near the basilica’s entrance, he prayed silently and listened to a series of invocations, including one that said, “Save us, O Lord, from illness, epidemics and fear of one’s brother.”

Francis also kissed a wooden crucifix that was carried in religious processions in Rome during an early 16th-century plague.

The Vatican has said that the faithful could receive what’s known as a plenary indulgence — a lifting of temporal punishment — from sin with the special blessing, providing they meet other conditions, like going to confession or receiving Communion as soon as they can.

Helping the world carry on during the pandemic are those who Francis called the “ordinary people, often forgotten, who do not appear in newspaper and magazine headlines” or in fashion shows.

But these ordinary people “without any doubt are in these very days writing the decisive events of our time: doctors, nurses, supermarket employees, cleaners, caregivers, providers of transport, law-and-order forces, volunteers” as well as priests, nuns and others, the pontiff said.

The prayer service was one of several scheduled over the next few weeks that will see the 83-year-old pontiff virtually solo in the square or celebrating Masses for Holy Week and Easter Sunday in the shelter of St. Peter’s Basilica instead of outdoors in the company of tens of thousands of faithful.

Earlier Friday, the Vatican announced that Francis will mark Holy Week ceremonies in the confines of Vatican City, including a Good Friday Way of the Cross service on the steps of the basilica, instead of at Rome’s Colosseum as customary.

Because of the COVID-19 pandemic, Francis will celebrate Mass for Palm Sunday, Holy Thursday, and Easter vigil and Easter Sunday — April 12 — all at the basilica’s central altar.

Before the pandemic, putting Italy and many other countries under stay-at-home orders that severely limiting people’s movements in public, tens of thousands of faithful would have crowded the square on Palm Sunday and Easter for outdoor Mass celebrated by the pontiff.

Good Friday’s candlelit procession at Rome’s ancient Colosseum traditionally draws big crowds of tourists, pilgrims and Romans. But weeks ago, both tourists and pilgrims started fleeing Italy amid fears of virus contagion and as lock-downs by local and national authorities were gradually declared.

Italy’s outbreak includes the world’s highest total of dead for a single nation.

COVID-19 can cause mild or moderate symptoms, like fever and cough. But a small percentage of sufferers are hospitalized with pneumonia in intensive care.

The Holy See has confirmed four virus cases in the tiny independent city state in the middle of Rome.

It has declined to say if Francis, who a few weeks ago had a cold, has been tested for COVID-19, and if so, what the result was. Among the Vatican’s confirmed cases is an Italian prelate who lives at a Vatican hotel where Francis resides.

Left: Pope Francis sits at St. Peter's Basilica during an extraordinary "Urbi et Orbi" blessing - normally given only at Christmas and Easter - as a response to the global coronavirus disease (COVID-19) pandemic, at the Vatican, on March 27, 2020. Photo by REUTERS/Yara Nardi/Pool