Pope urges solidarity on an Easter of both joy, virus sorrow

VATICAN CITY — Pope Francis called for solidarity the world over to confront the “epochal challenge” posed by the coronavirus pandemic, as Christians celebrated a solitary Easter Sunday, blending the joyful feast day with sorrow over the toll the virus has already taken.

Families who normally would attend morning Mass in their Easter best and later join friends for celebratory lunches hunkered down at home. Police checkpoints in Europe and closed churches around the globe forced the faithful to watch Easter services online or on TV.

A few lucky Romans attended Mass from their balconies overlooking Santa Emerenziana church in the northern Trieste neighborhood, where a priest celebrated a rooftop open-air service.

“We feel close to each other despite this distance,” parishioner Luca Rosati said from his balcony. “We can experience from here what we normally would experience inside the church, as a community.”

At Jerusalem’s Church of the Holy Sepulchre, where many Christians believe Jesus was crucified and entombed, Archbishop Pierbattista Pizzaballa urged the faithful to not be discouraged.

“The message of Easter is that life, despite all, will prevail,” said Pizzaballa said during Mass attended by a few clerics, with the streets of the surrounding Old City devoid of pilgrims and vendors.

At the Vatican, Francis celebrated Mass in a largely empty St. Peter’s Basilica, with a handful of token faithful sitting one per pew and and the choir’s “Kyrie” hymn echoing off the bare marble floors. 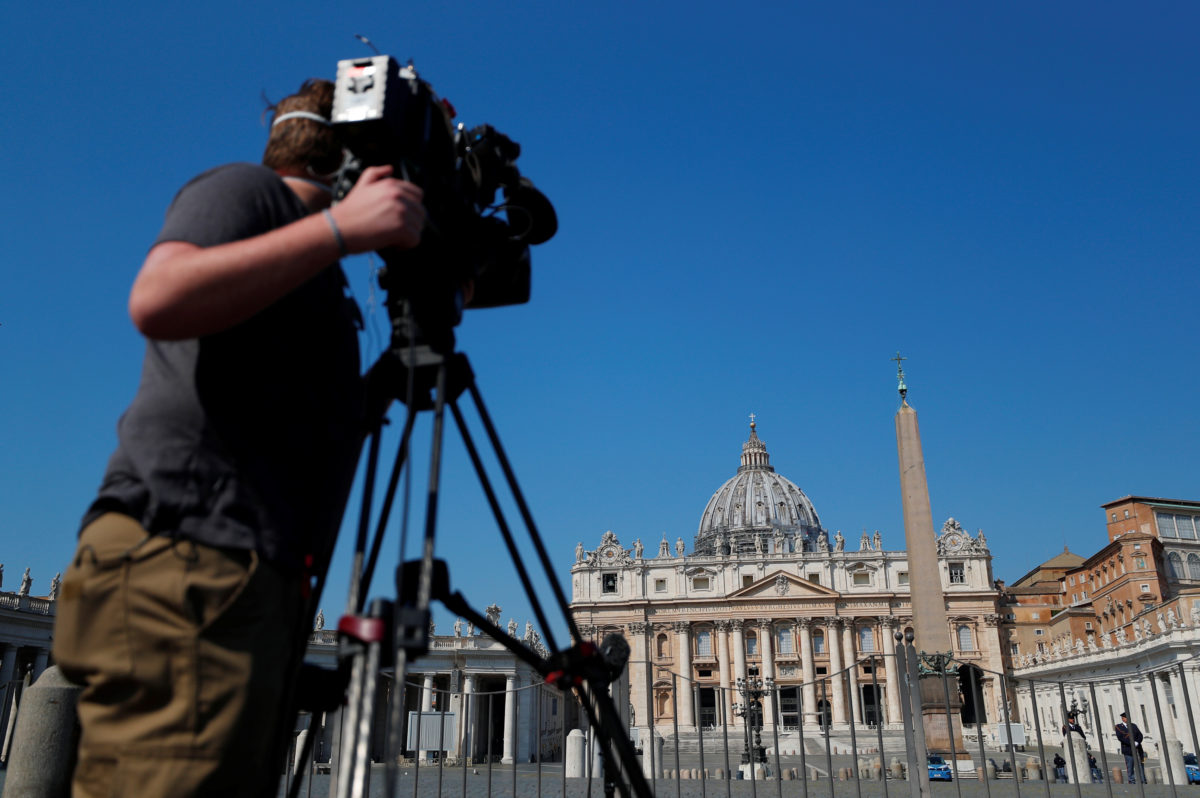 A TV cameraman is seen in St. Peter’s Square, as Pope Francis holds his Easter Sunday mass with no public participation due to an outbreak of the coronavirus disease (COVID-19), Vatican, April 12, 2020. Photo by Guglielmo Mangiapane/Reuters.

Normally, St. Peter’s Square would be awash in fresh flowers for Easter, with tulips and orchids decorating the piazza’s promenade in a riot of color to underscore Easter’s message of life and rebirth following Christ’s crucifixion.

This year, however, the cobblestoned piazza was bare. Police barricades ringed the square, blocking the tens of thousands who would normally flock to hear the pope’s Mass and noontime “Urbi et Orbi” speech and blessing “to the city and the world.”

Francis instead stayed indoors, underscoring the solitude confronting all of humanity amid lockdown orders to prevent further contagion.

In his Easter address, Francis urged political leaders to provide hope and opportunity to the millions of newly jobless and urged the European Union in particular to step up to the “epochal challenge” posed by COVID-19, which has ravaged Italy, Spain and other EU countries.

“After the Second World War, this beloved continent was able to rise again, thanks to a concrete spirit of solidarity that enabled it to overcome the rivalries of the past,” he said. “This is not a time for self-centeredness, because the challenge we are facing is shared by all, without distinguishing between persons.”

He urged the faithful to pray for the sick, the dead, the elderly alone. And broadening his horizons, he called for sanctions relief, debt forgiveness and cease-fires to calm conflicts and financial crises around the globe.

Francis’ lonely Mass was a scene that was repeated around the world, with churches either closed or, for the few still open, forcing the faithful to practice social distancing. In South Korea, where one outbreak was tied to a church sect, services were largely held online.

A small number of masked faithful attended service at Seoul’s Yoido Full Gospel Church, one of the biggest churches in South Korea. They were seated notably apart from each other, and choir members sang hymns from behind masks.

The Church of England shuttered its churches, prompting the Anglican archbishop of Canterbury, Justin Welby, to celebrate Easter Sunday service from his kitchen in London. The spiritual leader of 85 million Anglicans worldwide, Welby delivered his sermon in full robes behind a makeshift altar on his dining room table.

“Welcome to the kitchen of our home on Easter Day,” he said. “Once this epidemic is conquered here and elsewhere, we cannot be content to go back to what was before as if all was normal.”

In Lebanon, home to the largest percentage of Christians in the Arab world, Cardinal Bechara Rai urged the faithful to abide by virus lockdown measures even as Lebanon endures its worst economic crisis in decades.

“We are praying so that Lebanese officials work together in the spirit of collaboration to revive Lebanon economically, financially and socially,” Rai said in an almost empty church in Bkerki, northeast of Beirut, the seat of the Maronite Church he heads.

The church would normally be packed with people marking Easter, including the president, prime minister and parliament speaker.

In New Zealand, Catholic bishops wrote a special pastoral letter to worshipers stuck at home, acknowledging the stresses and uncertainties of this Easter like no other but urging the faithful to take comfort in time with family.

“This time has proved to be a reflective time enabling us to refocus or revision ourselves and how we live,” the letter said.

Pope Tawadros II, the spiritual leader of Egypt’s Coptic Orthodox Christians, celebrated in a largely empty Monastery of Saint Pishoy, in a desert valley west of the capital, Cairo. The church made the prayers available on its Facebook page. The Coptic Orthodox Church is one the world’s oldest Christian communities.

The Russian Orthodox Church said it would hold Easter services in Moscow next Sunday without the faithful present, citing an order from the city’s chief epidemiologist prohibiting mass gatherings.

Left: Pope Francis swings a thurible at the start of Easter Sunday Mass behind closed doors due to an outbreak of the coronavirus disease (COVID-19) at St. Peter's Basilica in the Vatican, April 12, 2020. Photo by Andreas Solaro/Pool via Reuters.