HONG KONG — A general strike in Hong Kong descended into citywide mayhem Monday as defiant protesters started fires outside police stations and hurled bricks and eggs at officers. After disrupting traffic early in the day, they filled public parks and squares in several districts, refusing to disperse even as police repeatedly fired tear gas and rubber bullets from above.

While previous large rallies over the past two months of anti-government protests have generally been held over the weekends, Monday’s strike paralyzed regular city operations in an effort to draw more attention to the movement’s demands.

Hong Kong is on “the verge of a very dangerous situation,” said Chief Executive Carrie Lam, who insisted that she has no plans to resign despite the ongoing tumult.

Lam said at a news conference that the current protests had “ulterior motives” that threaten Hong Kong’s prosperity and security. “I don’t think at this point in time, resignation of myself or some of my colleagues would provide a better solution,” she said.

Protesters challenged law enforcement in at least eight districts, responding to repeated rounds of tear gas with practiced swiftness. They lobbed the canisters back at police and yelled invectives. When police arrived on the scene, the protesters clacked their umbrellas together and pounded on metal street signs, daring the officers to move closer.

“Gangsters!” they jeered at the riot police. “Reclaim Hong Kong, revolution of our time,” they chanted. 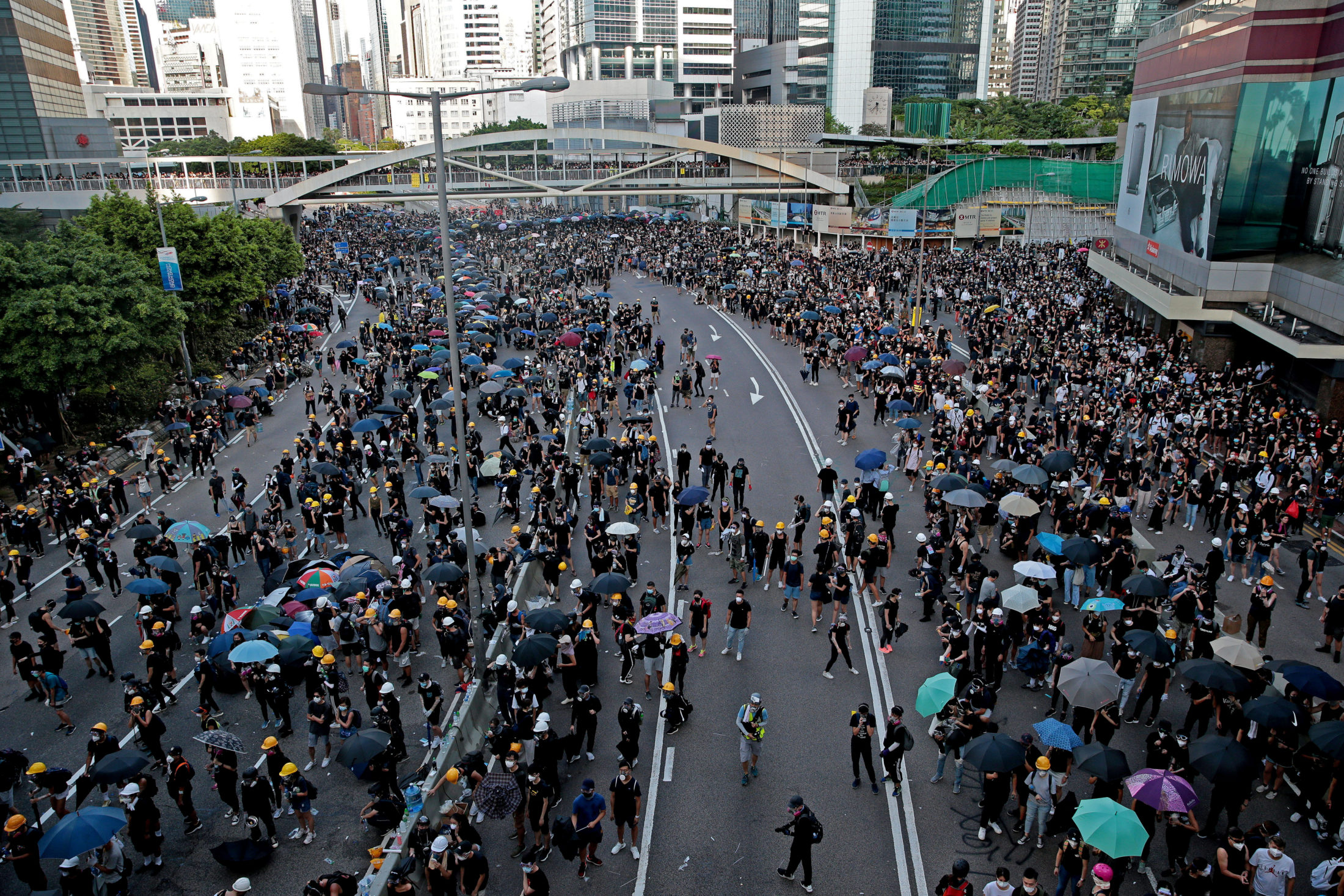 In one neighborhood after nightfall, a band of men wielding wooden poles charged at protesters from behind a thin road lane divider. The demonstrators fought back by throwing traffic cones, metal barricades and rods of their own.

“Too much. Why do they have to create trouble for people not involved in their cause?” said John Chan, whose flight to Singapore was canceled. “Hong Kong is sinking. The government, police and protest people have to stop fighting and give us a break.”

The strikes are the latest development in a summer of fiery demonstrations against proposed extradition legislation that would have allowed some suspects to be sent to mainland China for trials.

While the government has since suspended the bill, protesters have pressed on with broader calls for it to be scrapped entirely, along with demands for democratic reforms including the dissolution of the current legislature and an investigation into alleged police brutality.

Hong Kong, a former British colony, was returned to China in 1997 under a framework of “one country, two systems,” which promised the city certain democratic freedoms not afforded to the mainland. But some Hong Kong residents feel that Beijing has been increasingly encroaching on those rights.

The weekend was marked by now-routine clashes between protesters and police.

At a daily briefing, a police spokeswoman said 420 protesters have been arrested since June 9, the date of a massive march that drew more than 1 million people and ushered in the protest movement. Those being held, who range in age from 14 to 76, face charges including rioting, unlawful assembly, possessing offensive weapons and assaulting officers and obstructing police operations, spokeswoman Yolanda Yu Hoi-kwan told reporters.

Yu said police have used 1,000 tear gas grenades and fired more than 300 non-lethal bullets. She said 139 officers had been injured in clashes, with two still hospitalized with fractures.

She said violence has been escalating, with protesters using gasoline bombs and fire, including sending a cart full of burning trash hurtling toward officers.

“We love Hong Kong and hope to restore public order. If we continue to tolerate and turn a blind eye to lawless behavior, the consequences will be undesirable for our citizens,” Yu said. 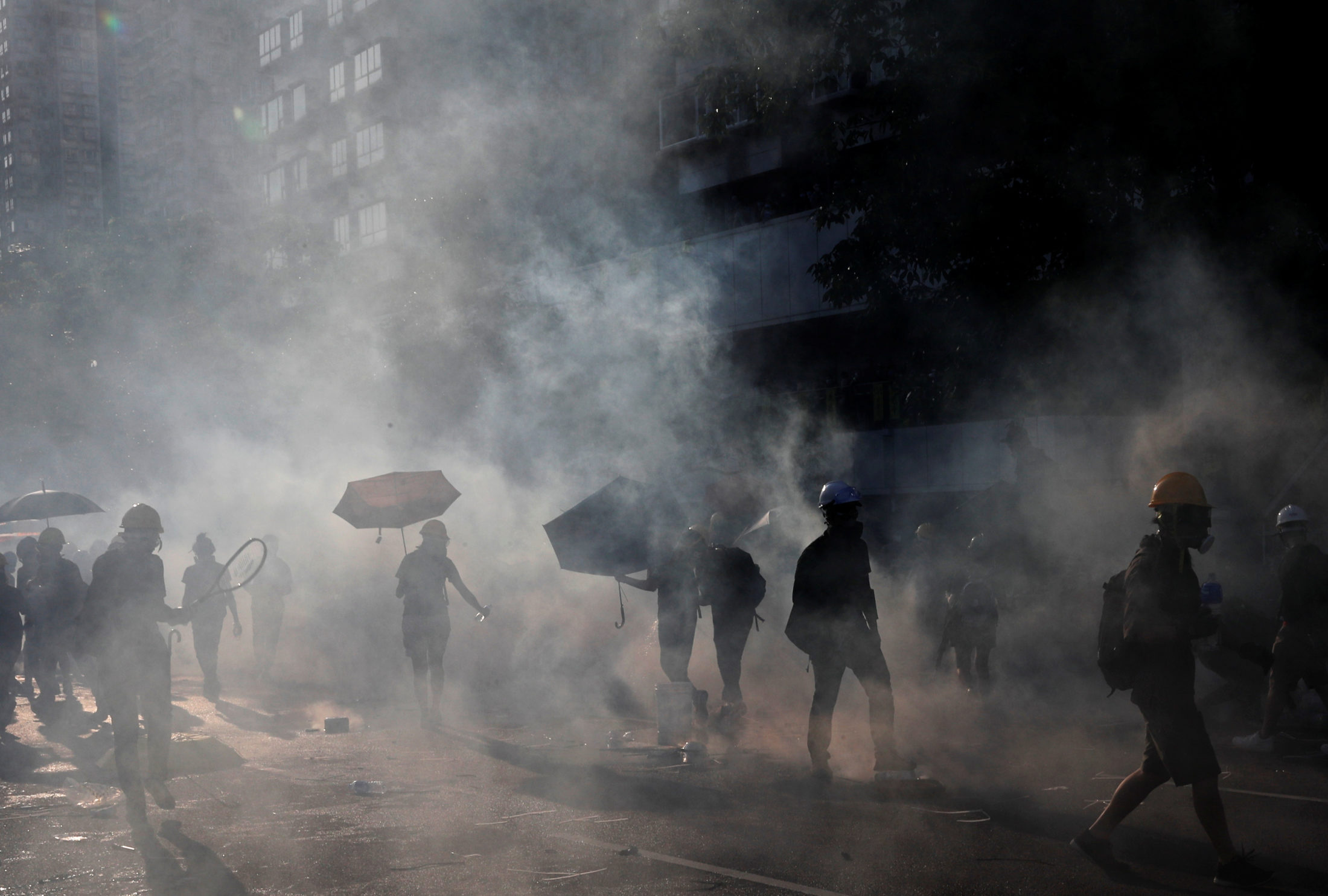 Protesters react after tear gas was fired by the police during a demonstration in support of the city-wide strike and to call for democratic reforms at Tai Po residential area in Hong Kong, China. Photo by Tyrone Siu/Reuters

Senior Superintendent Kong Wing-cheung of the Police Public Relations Branch said the police are fully supported by the government and there will be no need to deploy China’s military to help maintain order. He said Lam and other officials from her administration have stated the same on multiple occasions.

Speculation of intervention by the People’s Liberation Army was fueled in part by a slick publicity video it released last week showing troops firing tear gas and dealing with a mock street demonstration.

The Communist Party-led central government in Beijing has condemned what it calls violent and radical protesters who have vandalized the Chinese national flag on the sidelines of major rallies. China has accused unnamed “foreign forces” of inflaming the demonstrations out of a desire to contain the country’s development.

On Chinese state broadcaster CCTV’s daily noon news report, an anchor read from a strongly worded editorial titled “The Chaos in Hong Kong Must Not Continue.”

“We warn those maniacs and thugs who intend to continue to mess up Hong Kong by holding to a fantasy, that you must pay a price for your savage revenge,” the editorial said. “So please become aware of your errors, turn back from your incorrect path and set down the butcher’s knives.”

Bryant’s chopper crashed in fog that grounded other aircraft