Ousted Catalan leader Carles Puigdemont and four ministers turned themselves in to Belgium’s federal prosecutor on Sunday and now a judge must decide whether to impose European Union arrest warrants.

A Spanish judge had issued warrants for their arrests on Friday on charges of rebellion, sedition, misuse of public funds, disobedience and breach of trust, after Catalonia declared the region independent from Spain, a decision the country has ruled to be unconstitutional.

Puigdemont denounced the Spanish government and fled to Brussels last month, before the warrants were issued, and after Madrid imposed direct rule on the region.

Now the Belgian judge has “until 9:17 on Monday, to decide whether to refuse the European Arrest [Warrant], arrest them, release them under conditions or grant bail,” a spokesman for Belgian prosecutors told the BBC.

The judge has to weigh whether extraditions would violate the former leaders’ human rights, including rights to a fair trial and ensuring there has not been any discrimination based on politics, religion or race, according to the BBC.

Meanwhile, Catalan cities are protesting the detention of their former leaders. 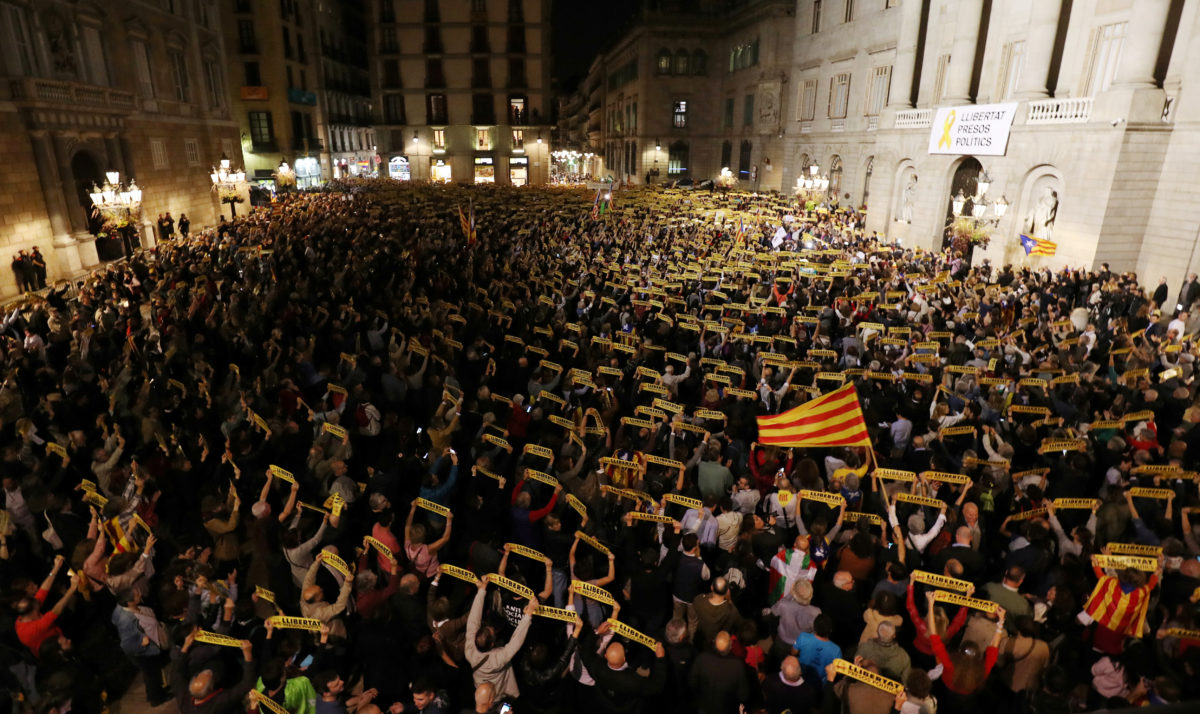 People hold banners reading “Freedom Political Prisoners” during a gathering in support of the members of the dismissed Catalan cabinet after a Spanish judge ordered the former Catalan leaders to be remanded in custody pending an investigation into Catalonia’s independence push, outside Barcelona’s town hall, Spain, November 3, 2017. Photo by Albert Gea/Reuters

Catalonia, the birthplace of Salvador Dalí, is a prosperous region in northeastern Spain with its own language and culture and a population of about 7.5 million, with Barcelona as its capital. Until recently, it had its own parliament and was autonomous, while the federal government oversaw areas of security such as immigration, the airports and the ports.

On Oct. 1, 90 percent of Catalans voted in the outlawed referendum favored secession from Spain. There was a 43 percent turnout. Police had tried to sabotage it by raiding polling stations, beating voters and firing rubber bullets into the crowds.

Since then, there has been tumult across the country, with hundreds of thousands protesting in favor of or against independence.

And a Catalan Assembly in Barcelona upheld the results with 70 votes in favor, 10 against, 2 blank ballots and several missing votes in protest.

If the Belgian judge decides to execute the warrant, a court will have 15 days to decide whether to uphold the decision, giving Puigdemont and his colleagues the option to appeal.

According to the Guardian, the defendants’ lawyers will likely argue that of sedition, a charge made by the Spanish government, does not exist in Belgian law.

A judge in Madrid jailed eight other former ministers, and let a ninth remain home on bail, in anticipation of similar charges.