Leaders in Catalonia say voters in the northeast region of Spain overwhelmingly cast ballots for independence from Spain in a Sunday referendum. But the country’s central government won’t recognize the vote, calling it illegal.

Since then, protesters have swarmed the streets and unions have gone on strike, grinding public transportation to a halt. Crowds chanted “occupiers leave” and “the streets will always be ours.”

Now, the president of the region, which includes Barcelona, says he will declare independence from Spain, anyway. As protests over the vote continue, here’s a look at what’s happening and what’s next.

Catalonia is an autonomous region in northeastern Spain known for its beach resorts and as the birthplace of Salvador Dali. The prosperous community, with a population of about 7.5 million, has its own language and culture. Barcelona is its capital.

Catalonia has its own parliament and police force, but national bodies oversee areas of security such as ports, airports, custom offices and immigration control. The judicial system also is administered nationally.

Why is the region seeking independence?

Catalonia has long sought independence, but the most recent push began in 2010, when a constitutional court overturned an agreement giving it more autonomy, part of an effort by the central government to tighten its fiscal belt during the global economic downturn, Duke University associate professor of political science Pablo Beramendi said in an interview with the Council on Foreign Relations’ Zachary Laub.

“Spain was in the midst of a major economic crisis and Madrid was forcing the Catalan government to implement draconian caps on education and health, especially after the conservative victory in November 2011, while accusing them of mismanagement,” Beramendi said.

What happened in Sunday’s vote?

While Catalonia had scheduled an independence referendum Sunday, it was not considered a legal vote by the central Spanish government. Police were dispatched in an effort to shut it down. They arrested Catalan officials involved in organizing the referendum, confiscated ballots, and reportedly used rubber bullets on voters and roughly pulled others from polling sites.

“If people insist in disregarding the law and doing something that has been consistently declared illegal and unconstitutional, law enforcement officers need to uphold the law,” Spanish Foreign Minister Alfonso Dastis told the Associated Press.

Sunday’s referendum to become a sovereign state was Catalonia’s second in three years. In the last referendum in November 2014, 80 percent voted to secede. Last weekend, officials say 90 percent voted to leave Spain, though those results could not be independently verified.

Although most Catalans reportedly wanted a vote to be held, they are divided on whether to leave Spain.

The large pro-independence vote could actually be a sign that many didn’t want to vote in a referendum that the Spanish government deemed illegal, said Sofia Sebastian, a Spanish-born analyst whose areas of expertise include international negotiations and conflict. About 2.26 million of Catalonia’s 5.34 million voters (42.3 percent) voted Sunday, according to Reuters.

“We need to take the results with a pinch of salt,” because the conditions for a fair referendum were not there, Sebastian said.

Is the referendum binding?

No. Spain’s Constitutional Court prohibited the referendum, ruling that it violated Spain’s 1978 constitution, which says the country cannot break apart.

Catalonia regional President Charles Puigdemont, who has lead the charge for independence, and his supporters believe Catalonia has put more into Spain than it has gotten in return and should be able to determine its own future.

Catalonia has always had a sense of community, but a nationalist sentiment has grown in the past few years following the financial crisis, Sebastian said. People started to blame the central government for their problems and wanted more fiscal autonomy, she said.

The central government for its part didn’t engage enough politically with Catalonia or explain why it should stay part of Spain, she said. If it had, “maybe we wouldn’t be where we are.” 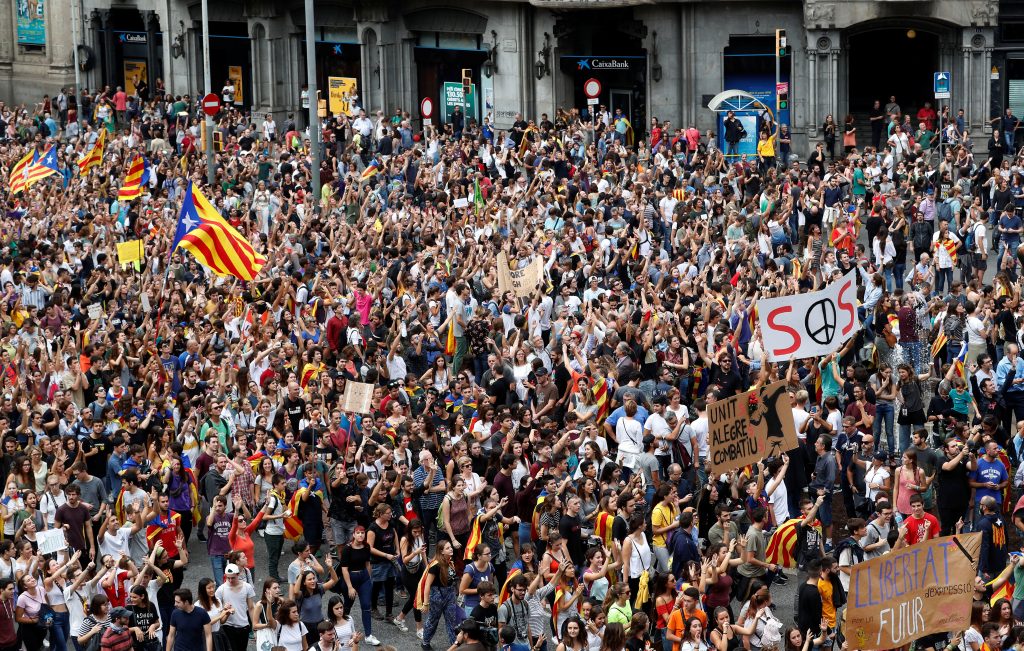 Some Catalans like Javier Castellanos don’t want to stay with Spain necessarily, but voted “no” on Sunday’s non-binding measure, because they would rather vote “yes” on a legal and binding referendum, he said in an interview with NPR.

He also said leaving Spain could weaken the economy because Catalonia would no longer be a member of the European Union.

Puigdemont first called for mediation to end the political dispute with Madrid. “We don’t want a traumatic break. … We want a new understanding with the Spanish state,” he said.

But on Tuesday, Puigdemont told the BBC that his region’s separation from Spain would come “in a matter of days.”

By Friday, the Catalan government announced that the official results showed an overwhelming vote for independence. And a Catalan legislator said discussions were underway to submit an independence declaration to the regional parliament on Tuesday.

A spokesman for the Spanish government, meanwhile, issued an apology for the police violence during Sunday’s referendum. “If there were incidents – and there were – and people were affected, obviously we are all sorry,” said spokesman Inigo Mendez de Vigo.

Spanish Prime Minister Mariano Rajoy has said he wants to work with other parties in the government to come up with a solution to the “pro-independence challenge” in Catalonia.

The Catalan government considers the vote a win and likely will use the images of the national police trying to prevent them from voting to its advantage, said Sebastian. “But the reality is that I just don’t think it’s going to change anything, at least internationally.” Most countries support the Spanish government and consider the Catalonia matter an internal one.

In a statement, the European Commission said the vote wasn’t legal. “As (European Commission) President (Jean-Claude) Juncker has reiterated repeatedly, this is an internal matter for Spain that has to be dealt with in line with the constitutional order of Spain.”

“My only hope is that because of the confrontation and escalation of conflict, both sides will take a step back and try to find a political solution to the situation,” Sebastian said.