MOSCOW (AP) — Russian opposition leader Alexei Navalny was discharged from a hospital Monday even though his physician raised suspicions of a possible poisoning after he suffered facial swelling and a rash while in jail.

Details about Navalny’s condition were scarce after he was rushed to a hospital Sunday with what authorities said was a suspected allergy attack inside a detention facility where he was serving a 30-day sentence for calling an unsanctioned protest. The 43-year-old political foe of President Vladimir Putin was arrested several days before a major opposition rally Saturday that ended with nearly 1,400 people detained.

Tensions are running high in Moscow as dozens of protesters remained in custody and the opposition called for a new rally next weekend.

Dr. Anastasiya Vasilyeva, who has been Navalny’s physician for several years, told reporters that the politician had been discharged from the hospital and sent back to the detention facility before the necessary tests were run on him.

Doctors at the hospital initially said that Navalny was taken in with a severe allergy attack, but Vasilyeva said that the swelling and the rash on his face could be consistent with chemical poisoning. The physician said the incarceration would jeopardize Navalny’s health.

“He has not fully recovered. He should have been left under medical supervision,” she told reporters outside the hospital, adding that the doctors didn’t even try to determine what caused the swelling and rash. “Who is going to watch over him at the detention facility? They are not qualified to provide him with professional help.”

Vasilyeva expressed concern that the chemical agent that caused the outbreak could still be in his prison cell.

Navalny’s attorney, Olga Mikhailova, told reporters earlier the outbreak was caused by “poisoning, by some kind of chemical substance” but that its source wasn’t established. She said he has been given anti-inflammatory steroids and that the swelling subsided.

The source of the allergic reaction or poisoning wasn’t immediately clear. But Navalny ally Leonid Volkov complained Sunday about “anti-sanitary conditions” at the detention facility where he also had been detained before. 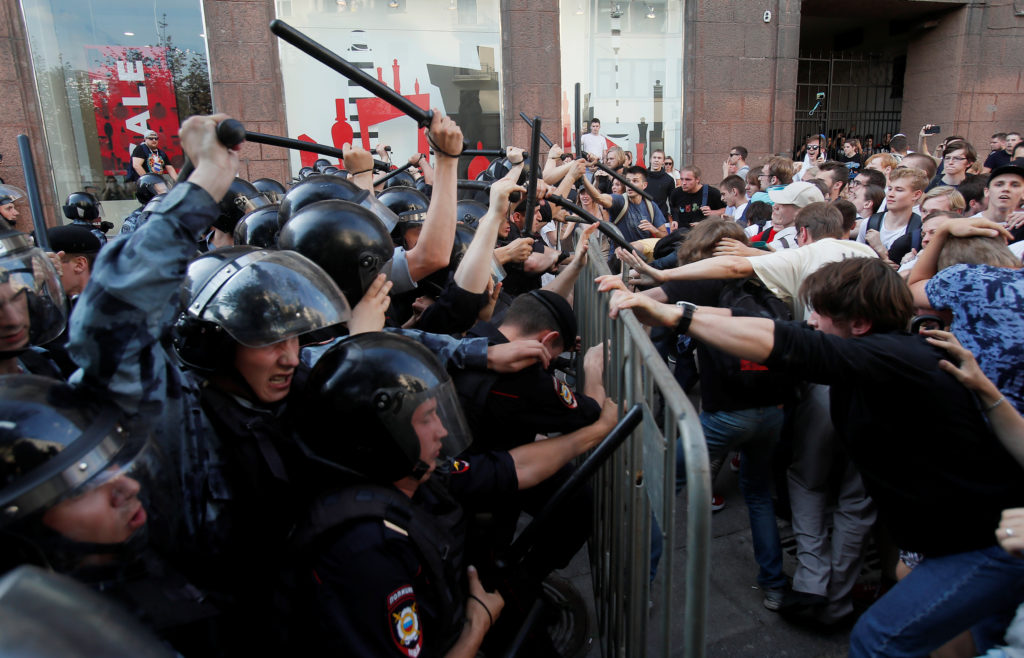 Law enforcement officers clash with protesters during a rally calling for opposition candidates to be registered for elections to Moscow City Duma, the capital’s regional parliament, in Moscow, Russia July 27, 2019. Photo by Maxim Shemetov/Reuters

Navalny, a lawyer and anti-corruption activist, has been the Kremlin’s most formidable foe since 2011, when he led a massive wave of protests of Putin and his party. He has since been convicted on two sets of criminal charges, largely regarded as politically motivated, and spent numerous stints in jail for disturbing public order and leading unsanctioned protests.

He has been attacked several times. In 2017, an assailant doused him with a green antiseptic, and Navalny sustained a chemical burn in one of his eyes, which left to a partial loss of vision. Navalny was able to travel abroad for treatment.

Baton-wielding police on Saturday wrestled with protesters in what might have been the largest unsanctioned protest in Russia in a decade. Opposition activists as well as ordinary Muscovites took to the streets to vent their anger over officials’ decision to exclude a dozen independent candidates from the ballot for an upcoming election of the Moscow city legislature, which is dominated by the ruling, pro-Kremlin party.

Andrei Pertsev of the Moscow Carnegie Center said in an opinion piece last week that the Kremlin was not going to allow opposition candidates on the ballot from the start, fearing their presence in the local council, however low-key, could give them a platform for campaigning for the next parliamentary election.

“It was a matter of principle for the Kremlin not to allow the opposition candidates on the ballot,” he said, adding that a Moscow city lawmaker would be an “odds-on favorite” to win a seat at the 2021 parliamentary election.

Putin, who was out of town to lead a naval parade in St. Petersburg on Sunday, has not commented on the massive protests. The dissent broke into the open earlier this month after election authorities refused to register a number of opposition candidates for the Sept. 8 vote, citing alleged minor violations.

The candidates’ supporters then picketed the headquarters of the Moscow Election Commission and rallied on a central square for several days straight. After authorities claimed that some of the 5,500 signatures each candidate collected were forgeries, the candidates went to the local election commission to protest, some bringing the same people whose signatures were ruled invalid.

More than 1,400 people were taken into custody, including several would-be candidates. One of them, Ilya Yashin, was sentenced Monday to 10 days in jail for calling Saturday’s protest. Another, Dmitry Gudkov, is due to appear in court later in the day.