Russian MetroJet flight 9268 and its 224 passengers and crew lifted off from the Egyptian resort city of Sharm el-Sheikh shortly before 6 a.m. Saturday morning. Just 23 minutes later, the flight lost contact with ground control and plunged more than 30,000 feet before hitting the desert floor in a mountainous central area of Egypt’s Sinai Peninsula. No one on board survived, officials say.

Except for three Ukrainian passengers, everyone on board was Russian, Egyptian government officials said.

Egyptian search and rescue teams found the plane’s wreckage  — including both of the so-called black boxes, the flight data recorder and the cockpit voice data recorder, which may yield clues as to what happened during the plane’s final moments — about 40 miles south of the northern Sinai city of Arish.

“I now see a tragic scene,” an unnamed Egyptian security officer told Reuters by telephone from the scene of the crash. “A lot of dead on the ground and many who died whilst strapped to their seats.”

“The plane split into two, a small part on the tail end that burned and a larger part that crashed into a rock face. We have extracted at least 100 bodies and the rest are still inside,” the officer said. 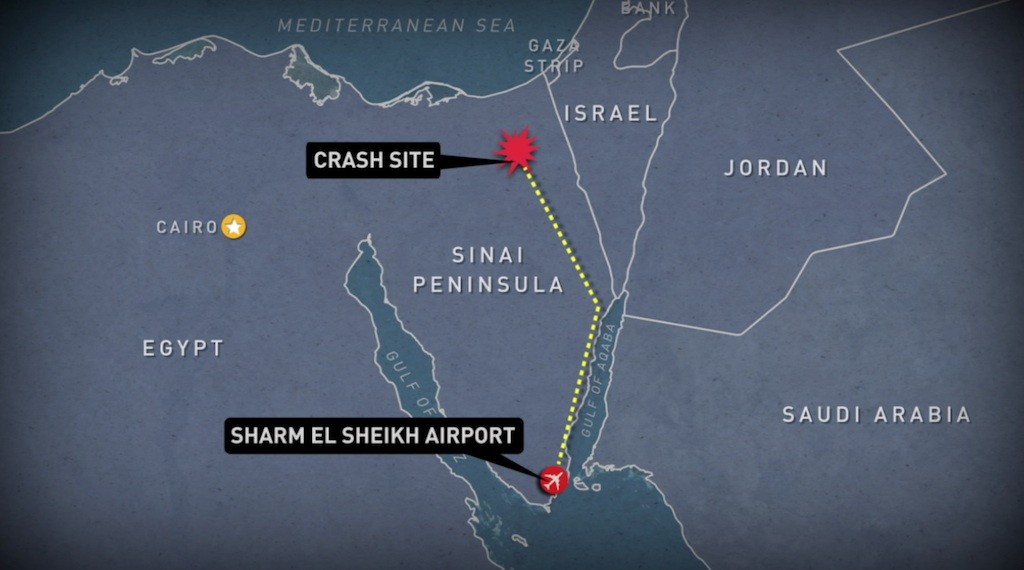 At a news conference, Russian transportation minister Maxim Sokolov said the cause of the crash was as yet undetermined. But terrorism and engine trouble have both emerged as unconfirmed potential explanations.

For years, Egyptian security forces have battled an Islamic insurgency in the region. That fight has intensified recently following Egyptian President Abdel Fattah el-Sisi’s seizure of power from Islamist former president Mohammed Morsi, and the rise to prominence among the Sinai insurgency of an ISIS-affiliated militant group.

That group, Sinai Province of the Islamic State, released a statement in which it claimed responsibility for the crash, according to a translation by the SITE Intelligence Group. The group said that it had downed the plan as retaliation for Russia’s recent military actions in support of the Assad regime in Syria.

Two major European carriers, Air France and Lufthansa, said Saturday that they will stop flying over the Sinai as a precautionary measure while the crash is under investigation.

Unconfirmed news reports pointed to technical failure, not terrorism, as the possible cause of the crash.

Russia’s state-funded RIA Novosti news agency reported that a source at the airport in Sharm el-Sheikh said the plane’s crew had complained to the airport’s technical service that the 18-year-old Airbus 321 had engine problems, and an official with Egypt’s Aviation Incidents Committee, Ayman al-Muqadem, said that the pilot requested an emergency landing before losing communication.

Russian airlines were notorious for dismal safety records following privatization and regulatory chaos in the wake of the Soviet Union’s collapse. Although Russia’s air safety record has improved somewhat in recent years, crashes — many blamed on human error — persist. Russian airlines sell roughly one tenth as many airline tickets annually as do U.S. companies. But despite the difference in passenger volumes, Russia ranks second in the world behind the United States in terms of fatal plane crashes.

Russian Prime Minister Dmitry Medvedev ordered the establishment of an interdepartmental commission, headed by transportation minister Sokolov, to investigate the circumstances of the crash, according to a government press release.

In honor of those killed in the crash, the decree designates that “Russian national flags will be flown at half-mast across the country. Cultural institutions and television and radio broadcasters should cancel entertaining events and programs on the day of mourning.

The Russian government, together with local authorities, should take appropriate measures to provide assistance to the families of the victims,” according to the state-owned TASS news agency.

Left: The remains of a Russian airliner are seen in central Sinai near the city of Arish, north Egypt, October 31, 2015. The Airbus A321, carrying 224 passengers and crew, crashed into a mountainous area of Egypt's Sinai Peninsula on Saturday, killing all aboard. Photo by Retuers