Saeb Erekat, longtime spokesman for Palestinians and advocate for a two-state solution, dies at 65

JERUSALEM (AP) — Saeb Erekat, a veteran peace negotiator and prominent international spokesman for the Palestinians for more than three decades, died on Tuesday, weeks after being infected by the coronavirus. He was 65.

The American-educated Erekat was involved in nearly every round of peace negotiations between Israel and the Palestinians going back to the landmark Madrid conference in 1991. Over the years, he was a constant media presence. He tirelessly argued for a negotiated two-state solution to the decades-old conflict, defended the Palestinian leadership and blamed Israel — particularly hard-line leader Benjamin Netanyahu — for the failure to reach an agreement.

As a loyal aide to Palestinian leaders — first Yasser Arafat and then Mahmoud Abbas — Erekat clung to this strategy until his death, even as hopes for Palestinian statehood sank to new lows.

In the weeks leading up to his death in an Israeli hospital, the United Arab Emirates and Bahrain had normalized ties with Israel, breaking with the long-held Arab position that a deal on Palestinian statehood must precede normalization. Abbas and members of his inner circle, including Erekat, found themselves internationally sidelined and deeply unpopular among Palestinians. And decades of unfettered Israeli settlement expansion had made a statehood deal based on the partition of territory increasingly unlikely.

His son Ali confirmed that he passed away. Hadassah Medical Center, the Israeli hospital where he had been receiving intensive care for three weeks, also announced his passing. Erekat has received a lung transplant in 2017 and was at especially high risk from the virus.

Mosque loudspeakers in his hometown of Jericho also announced his death.

Abbas said Erekat’s death was a “great loss for Palestine and our people, and we feel deeply saddened by his loss, especially in light of these difficult circumstances facing the Palestinian cause.”

Abbas said flags will be flown at half-mast for three days. Erekat will be laid to rest in Jericho on Wednesday.

“The passing of (Erekat) marks the end of an era,” tweeted Robert Malley, a senior advisor on the Middle East in the Obama administration. “No one believed in the possibility of a two-state solution as ardently as he did; no one fought for it with greater conviction & obstinacy.” 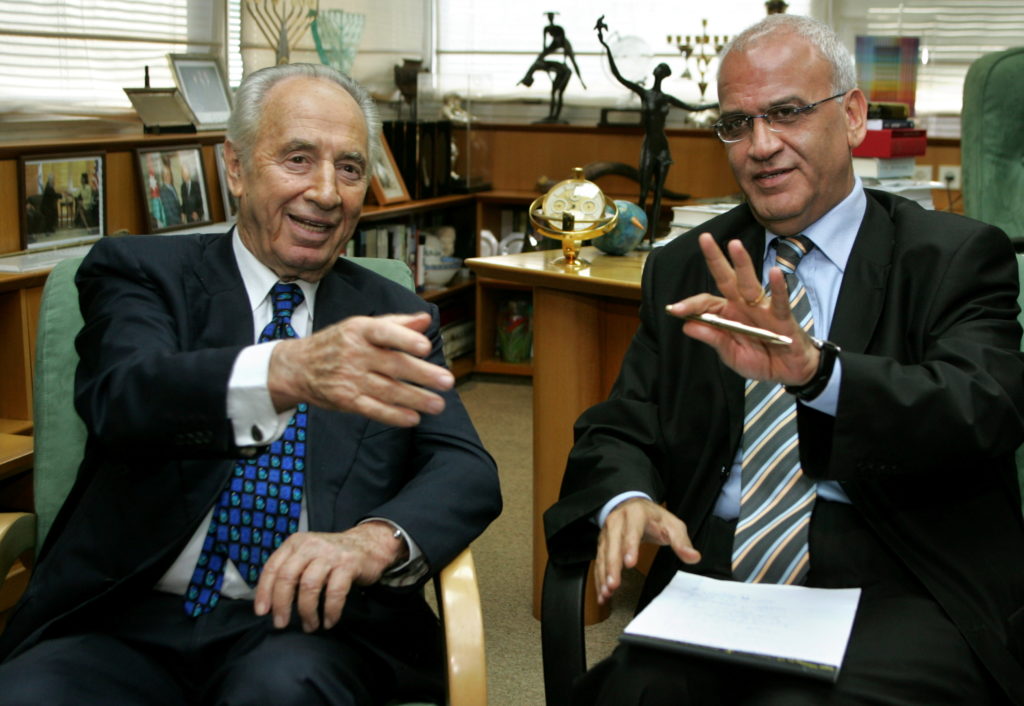 Tzipi Livni, a former Israeli foreign minister who negotiated with Erekat in the 2000s, said he had texted her after falling ill, saying “I’m not finished with what I was born to do.” She offered her condolences, saying “he will be missed.”

Yossi Beilin, a former Israeli Cabinet minister and peace negotiator, called Erekat’s death “a big loss for those who believe in peace, both on the Palestinian side and the Israeli side.”

He said that Erekat had sent his own children to “Seeds of Peace,” a summer camp promoting coexistence between Israelis and Palestinians, and that after a flood in Jericho, he had been moved to see his daughter receive 23 emails from Israeli friends asking if she was OK.

“He said: ‘For me this is the whole story — if we care for each other and understand that we can be friendly’,” Beilin recalled.

Erekat was born on April 28, 1955 in Jerusalem. He spent most of his life in the occupied West Bank town of Jericho, a palm-studded desert oasis about 30 minutes from Jerusalem. As a child in Jericho, he witnessed Palestinians fleeing to nearby Jordan during the 1967 war in which Israel captured the West Bank, east Jerusalem and the Gaza Strip.

In interviews, Erekat often spoke about life and his family in Jericho, as a way of explaining the impact of Israeli occupation to foreign viewers and to position himself as an ordinary Palestinian. His wit and grasp of colloquial American phrases made him popular with interviewers.

Erekat studied abroad, earning a BA and MA in international relations from San Francisco State University and later completing a Ph.D. at the University of Bradford in the U.K., where he focused on conflict resolution. Erekat also held U.S. citizenship.

When he returned to the West Bank he became a professor at An-Najah University in Nablus and an editor at the Al-Quds newspaper. A self-described pragmatist, he invited Israeli students to visit the university in the late 1980s and condemned violence on all sides.

He was nevertheless convicted of incitement by an Israeli military court in 1987 after troops raided the university and found an English-language newsletter he had authored in which he wrote that “Palestinians must learn how to endure and reject and resist” all the forms of occupation.

Erekat insisted he was advocating peaceful resistance and not armed struggle, and he was later given an eight-month suspended sentence and fined $6,250. “If they have reached the point of fining someone like me $6,250 for three words written in English and sent abroad, then the occupation is not working and they are really getting nervous,” he later said.

The first intifada, or Palestinian uprising, erupted later that year in the form of mass protests, general strikes and clashes with Israeli troops. That uprising, along with U.S. pressure on Israel, culminated in the Madrid conference, widely seen as the start of the Mideast peace process.

Erekat was a prominent representative of Palestinians living inside the occupied territories at the time, but became a close aide to Arafat when the exiled Palestine Liberation Organization returned to the territories following the 1993 Oslo accords. In subsequent years he routinely served as Arafat’s translator, and was sometimes accused of editing his remarks to soften the rough edges of the guerrilla leader-turned-aspiring statesman.

Throughout the 1990s, Erekat was a frequent guest on CNN and other news programs, where he condemned violence on both sides but warned that the peace process was at risk of collapse because of Israel’s refusal to withdraw from the territories.

Then, as now, the Palestinians sought an independent state in east Jerusalem, the West Bank and the Gaza Strip. The Oslo accords were intended to pave the way for such a settlement, but the process stalled amid a wave of suicide bombings and other attacks by Palestinian militant groups and continued Israeli settlement construction and failure to keep pledges to turn over territory to Palestinian control. With both sides accusing each other of acting in bad faith, they were unable to agree on final status issues, such as borders, security, Jerusalem, and the fate of Palestinian refugees. 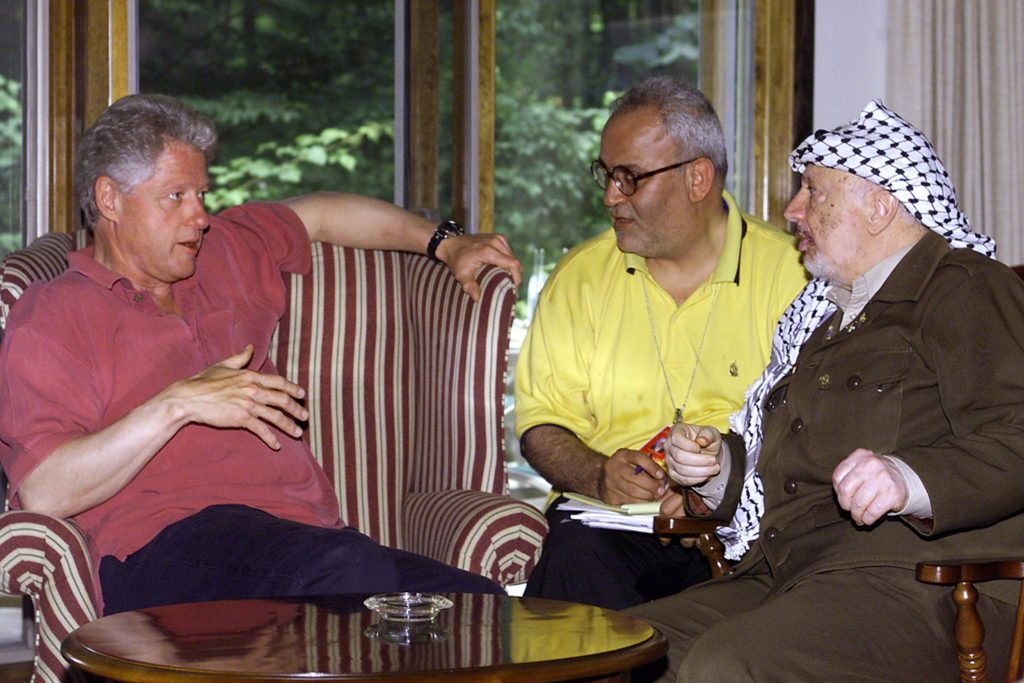 Erekat was part of the Palestinian delegation at Camp David in 2000, when President Bill Clinton brought the two sides together for marathon talks aimed at reaching a final agreement. The talks ended inconclusively, and a few months later a second and far more violent intifada erupted.

By then Erekat had become a senior Palestinian official and was seen as a possible successor to Arafat, who died in a French hospital in 2004. Erekat accompanied Arafat’s body on the flight back to the West Bank for burial. He continued as a top aide to Abbas and served as a senior negotiator in sporadic peace efforts in the late 2000s.

“I am the most disadvantaged negotiator in the history of man,” he told a reporter in 2007, the year that the Islamic militant group Hamas seized control of Gaza from Abbas’ forces. “I have no army, no navy, no economy, my society is fragmented.”

Erekat resigned as chief negotiator in 2011 after a trove of documents was leaked to the pan-Arab broadcaster Al-Jazeera showing that the Palestinian leadership had offered major concessions in past peace talks that were never made public. But Erekat remained a senior Palestinian official and a close adviser to Abbas, who later appointed him secretary general of the PLO.

But Erekat continued to call for a two-state solution based on the 1967 lines, accusing the Israeli leader of putting a “nail in the coffin” of hopes for peace by continuing to expand settlements.

While Erekat was welcomed in world capitals, he was more controversial in the West Bank, where he was seen as part of an elite clique enjoying a jet-setting lifestyle but detached from the public and clinging to an unrealistic goal after years of failed peace efforts and Israeli settlement expansion.

He was a strident critic of President Donald Trump’s Mideast plan, which overwhelmingly favors Israel and would allow it to keep nearly all of east Jerusalem and up to 30% of the West Bank. He derisively said “real estate men” would never solve the conflict and accused Trump and Netanyahu of teaming up to “destroy the Palestinian national project.”

“To reject this plan isn’t to reject peace but the contrary: Rejecting it means rejecting the perpetuation of a system of apartheid,” he wrote in a Washington Post op-ed in January.

He closed the column with the same call to action he had been issuing for nearly three decades.

“The international community must decide: Either it stands on the right side of history with the independence of the state of Palestine living side by side, in peace and security, with the state of Israel on the 1967 border — or it agrees to tolerate an apartheid regime.”
Erekat is survived by his wife, two sons, twin daughters and eight grandchildren.