Abbas urged the Security Council to vote for full membership, and he called on countries that hadn’t done so already to recognize the state of Palestine.

The Obama administration has promised to veto the Palestinian request for membership if the U.N. Security Council takes it up, saying it would circumvent the peace process with Israel. 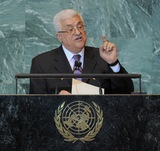 Abbas said Palestinians are seeking a greater and more effective role in the United Nations to obtain legitimate national rights for the Palestinian people, as defined by U.N. resolutions of international legitimacy.

He held up a copy of the application to loud cheers in the U.N. chamber.

The Israeli government isn’t committing to the terms of the negotiations based on international law and continues to build settlements in Palestinian territories, Abbas said.

“This policy will destroy the chances of achieving a two-state solution upon which there is an international consensus, and here I caution aloud: This settlement policy threatens to also undermine the structure of the Palestinian National Authority and even end its existence,” he said, according to translators.

Negotiations will be meaningless as long as Israel advances its occupation in order to alter its borders, he said.

He ended his speech by saying “Palestine is waiting to be born.”

Israeli Prime Minister Benjamin Netanyahu addressed the U.N. General Assembly later in the afternoon, saying Israel wants peace despite its reputation among some in the United Nations.

“In Israel, our hope for peace never wanes,” Netanyahu said, but “we cannot achieve peace through U.N. resolutions but through negotiations between the two parties.” 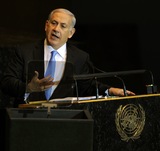 As for settlements, Netanyahu said that in Gaza, the Israelis uprooted thousands of people from their homes, took children out of schools, leveled synagogues and unburied some graves.

“But ladies and gentlemen, we didn’t get peace. We got war,” he said. And Israel is called upon to make increasing concessions without ensuring its security.

“The Palestinians should make peace with Israel and then get their state,” said Netanyahu.

The U.N. website did not have the text of Netanyahu’s remarks. Statements are supplied by the country of origin.

Haim Malka, senior fellow and deputy director of the Center for Strategic and International Studies’ Middle East Program, said the two speeches were a reminder of why it is so difficult to resume negotiations and why a negotiated agreement is unlikely in the foreseeable future.

“Each side laid out their conditions (for peace) and those conditions are very far apart,” not to mention the politics surrounding the issue in both places which are only getting more complicated, he said.

Some Palestinians feel fighting Israel through international legal means and the United Nations is a more effective strategy, but rather than pressuring Israel, the bid for statehood might actually backfire by hardening its stance and possibly delaying statehood even longer, said Malka.

“There is still some time left before the Security Council votes on the Palestinian request, and the challenge is to try to reach some sort of compromise before that,” he said.

We will have more about the Palestinian statehood bid on Friday’s NewsHour. View all of our World coverage and follow us on Twitter.