Saudi coalition in Yemen, under pressure, ends US refueling

DUBAI, United Arab Emirates — The Saudi-led coalition fighting in Yemen said early Saturday it had “requested cessation of inflight refueling” by the U.S. for its fighter jets after American officials said they would stop the operations amid growing anger over civilian casualties from the kingdom’s airstrikes.

The decision by the U.S. to pull out also comes amid outrage by U.S. lawmakers from both political parties over the Oct. 2 killing of Washington Post columnist Jamal Khashoggi at the Saudi Consulate in Istanbul.

The Saudi acknowledgement, and later U.S. comments, appeared aimed at suggesting the kingdom was behind the decision. Crown Prince Mohammed bin Salman, who launched the Yemen war as the kingdom’s defense minister in March 2015, faces widespread international criticism for the war and after members of his entourage allegedly took part in Khashoggi’s slaying. 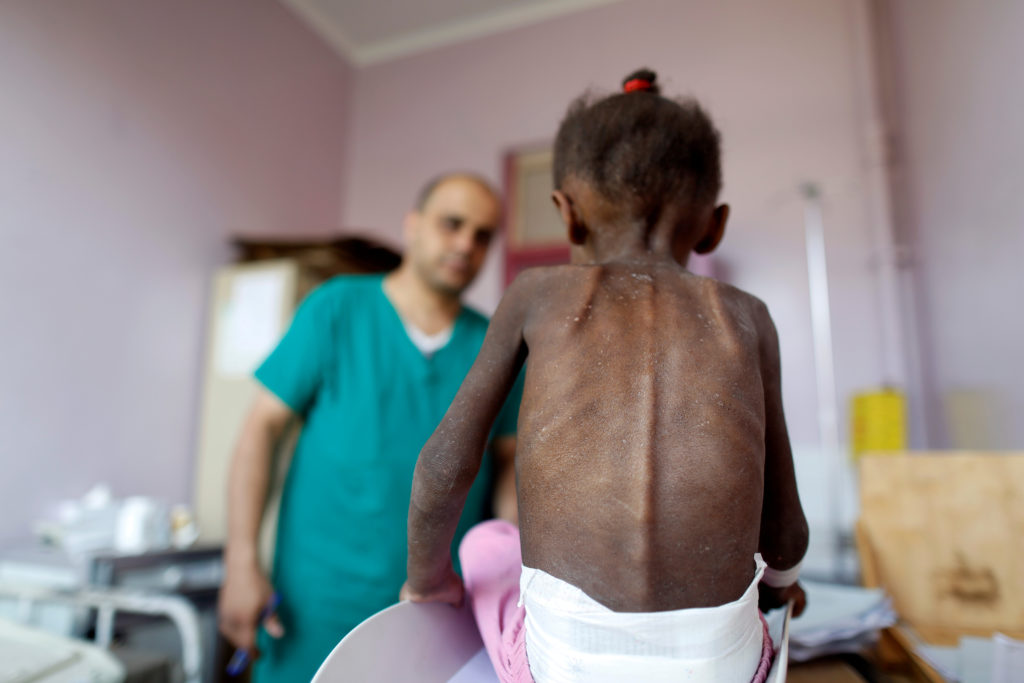 FILE PHOTO: A nurse looks as he weighs a malnourished girl at a malnutrition treatment center in Sanaa, Yemen October 7, 2018. Photo By Khaled Abdullah/Reuters

“We support the decision by the Kingdom of Saudi Arabia, after consultations with the U.S. government, to use the coalition’s own military capabilities to conduct inflight refueling in support of its operations in Yemen,” U.S. Defense Secretary Jim Mattis said in a statement. “The U.S. will also continue working with the coalition and Yemen to minimize civilian casualties and expand urgent humanitarian efforts throughout the country.”

It wasn’t immediately clear what impact the U.S. withdrawal from air refueling operations would have. American officials earlier said Saudi forces now handled some 80 percent of their refueling operations, which crucially allow aircraft to fly longer sorties over possible targets and can ease the pressure for quick strikes.

Yet even with that refueling support, Saudi Arabia has faced widespread international criticism over its campaign of airstrikes in the coalition’s war in Yemen, targeting Shiite rebels known as Houthis who hold the capital, Sanaa.

Saudi strikes have hit public markets, hospitals and other nonmilitary targets, killing scores of civilians. One such Saudi-led airstrike in August in Yemen’s Saada province hit a bus and killed dozens of people, including schoolchildren wearing backpacks. Human rights groups have found fragments of American-made munitions after several of these strikes.

U.S. officials, speaking on condition of anonymity Friday to discuss the decision before its announcement, said the end to refueling wouldn’t stop American training and military assistance. The Post first reported the Trump administration’s desire to end the refueling.

The Saudi statement, carried early Saturday on the state-run Saudi Press Agency, did not acknowledge the Trump administration’s discussions and pressure for its withdrawal.

It also said it hoped upcoming United Nations sponsored talks “in a third country” would help end the war. U.N. special envoy for Yemen Martin Griffiths has said he is consulting with Yemen’s warring parties to finalize details for a new round of peace talks. However, Griffiths’ effort to revive peace talks in September fell through after the Houthis failed to attend, arguing they didn’t have guarantees for their safe return.

News of the halt to U.S. refueling operations was swiftly dismissed by the Houthis as a media ploy that came in response to international pressure on Washington and Riyadh over the Yemen war.

“We have one clear demand and that is a complete halt to Saudi airstrikes,” said one Houthi official who spoke to The Associated Press on Saturday on condition of anonymity because he was not authorized to brief the media. “If there is a halt to the airstrikes, then we can proceed to political negotiations.”

Meanwhile, intense fighting near the Red Sea port city of Hodeida continued over the weekend, with stepped up airstrikes by the Saudi-led coalition pounding Houthi positions. On Saturday, the sound of large explosions east and north of Hodeida rocked the city as coalition forces tried to take the town of al-Saleh northeast of the city where they are meeting stiff resistance.

The Houthis maintain that their forces are holding their ground and deny losing territory to the coalition-led ground forces.

The pullout from refueling comes amid new American efforts to force an end to a conflict described as the world’s worst humanitarian crisis. Yemen, the Arab world’s poorest country, has stood on the brink of famine and faced disease outbreaks in a conflict that has killed at least 10,000 people.

Saudi Arabia and the UAE view the war as a means to limit Iranian influence in the Arabian Peninsula. While Iran directly denies arming the rebels, the United Nations and Western powers have documented arms transfers to the Houthis by Tehran of everything from Kalashnikov assault rifles to the ballistic missile technology used to periodically target cities as far away as the Saudi Arabian capital of Riyadh. The Houthis also have imprisoned opponents and indiscriminately laid land mines.

Both Mattis and U.S. Secretary of State Mike Pompeo have pushed for a cease-fire in recent days. Saudi and Emirati forces, as well as their allies on the ground, have made a renewed push for the Houthi-held Red Sea port city of Hodeida, through which most food and aid enters Yemen. International aid agencies warn any disruption to the port could sever that crucial lifeline.

“Hodeida is at risk of being obliterated,” said Mohamed Abdi of the Norwegian Refugee Council. “We are now warning that by allowing this to go on, parties to the conflict and their international backers will be responsible for the death, injury and suffering of millions of people.”

Associated Press writers Lolita Baldor and Matthew Lee in Washington and Ahmed al-Haj in Sanaa, Yemen contributed to this report.

Left: Hafidh Abdullah al-Khawlani, who survived a Saudi-led air strike stands with his father on the wreckage of a bus destroyed by the strike in Saada, Yemen September 4, 2018. His brother was killed by the air strike. Photo By Naif Rahma/Reuters