Scuffles, tear gas as police clamp down on Paris protest 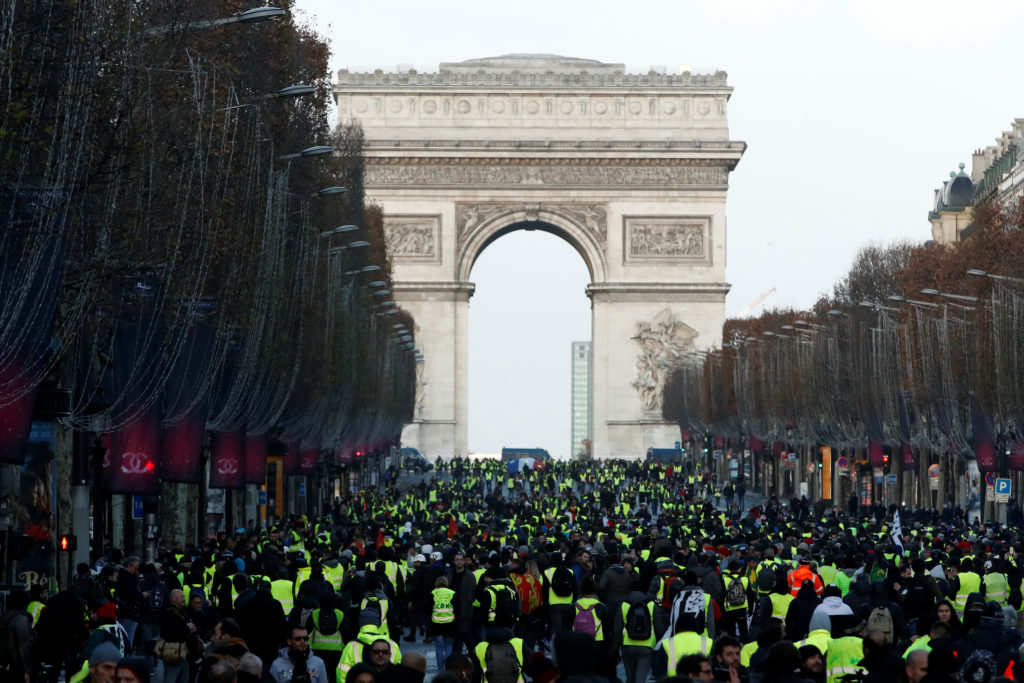 Protesters wearing yellow vests walk on the Champs-Elysees Avenue with the Arc de Triomphe in the background during a national day of protest by the “yellow vests” movement in Paris, France, December 8, 2018. Photo by Christian Hartmann/Reuters

Blue armored vehicles beneath the Arc de Triomphe and rows of helmeted, thickly protected riot police blocked the demonstrators’ passage down the Champs-Elysees avenue toward the heart of presidential power. A ring of steel surrounded the Elysee Palace itself as police stationed trucks and reinforced steel barriers in streets throughout the entire neighborhood.

Prized Paris monuments and normally bustling shopping meccas were locked down at the height of the holiday shopping season. The Eiffel Tower and Louvre Museum were among tourist attractions that remained closed, fearing damage after rioting and looting last Saturday that saw 130 people injured.

Breaking Video: Rioters loot stores and flip a car over during protests in Paris, France. pic.twitter.com/FY27TVnP1t

The grassroots movement began as resistance against a rise in taxes for diesel and gasoline, but quickly expanded to encompass frustration at stagnant incomes, the growing cost of living and other grievances. Macron agreed to abandon the fuel tax hike, but that hasn’t defused the anger, embodied by the fluorescent safety vests that French motorists are required to keep in their cars.

While scattered scuffles broke out Saturday around central Paris, the action seemed less violent overall at midday than at the same time a week ago, when crowds defaced the Arc de Triomphe, one of the city’s most revered monuments, and rampaged in the surrounding high-end neighborhood. 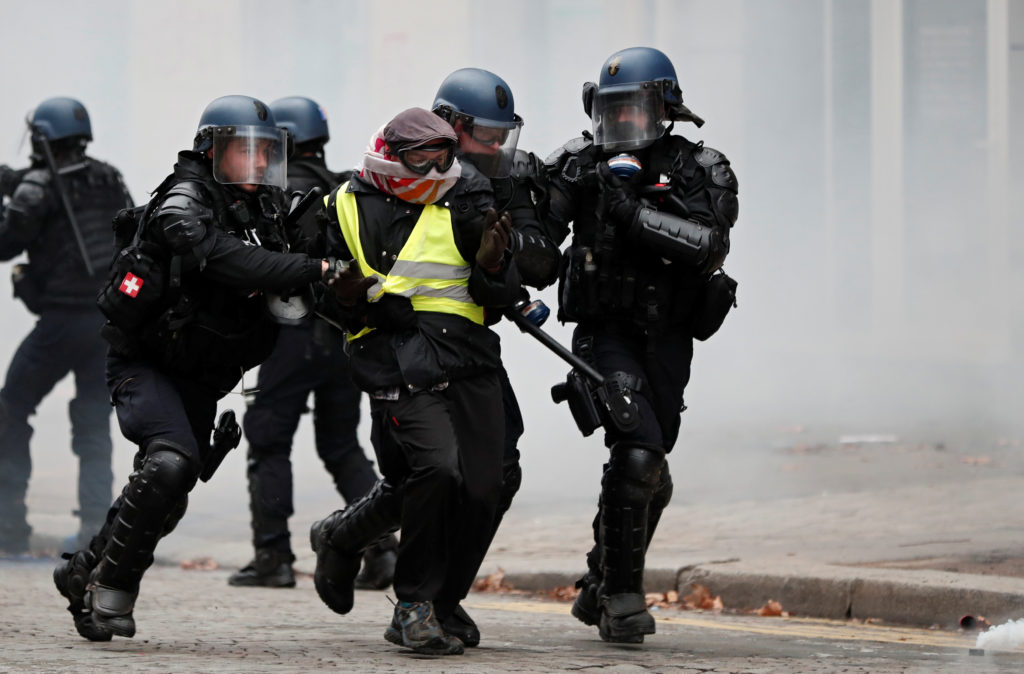 French gendarmes apprehend a protester during clashes at a demonstration by the “yellow vests” movement in Paris, France, December 8, 2018. Photo by Benoit Tessier/Reuters

After two weekends of violence in Paris that made the authorities look powerless to secure their capital, police went into overdrive Saturday to keep a lid on unrest.

Police frisked people or searched bags every hundred meters or so throughout central Paris, and confiscated gas masks and protective goggles from Associated Press journalists. 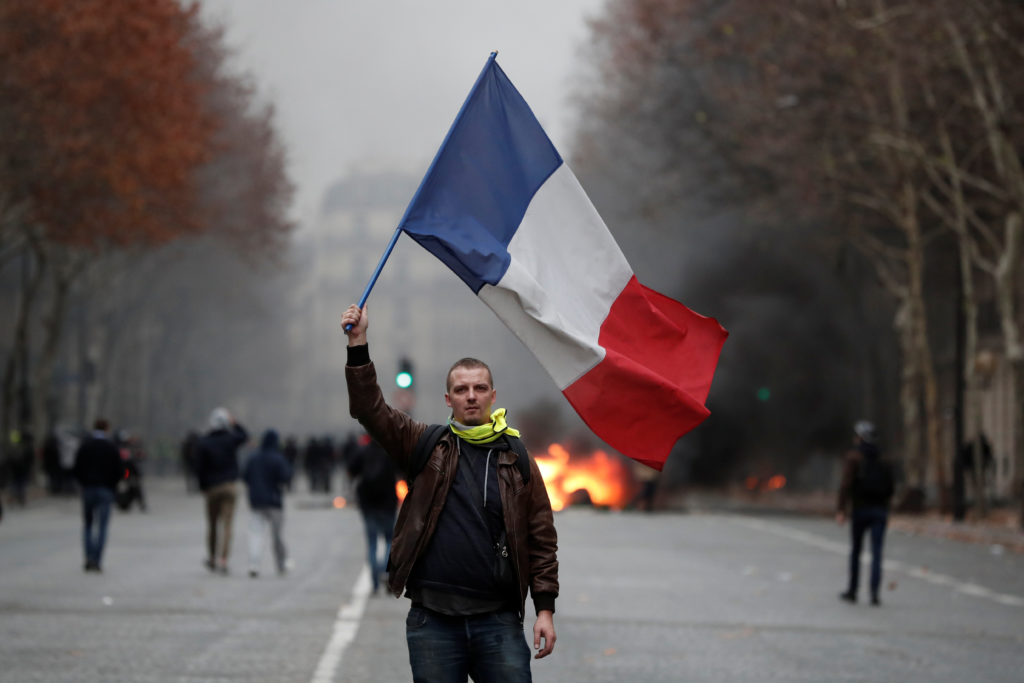 A protester waves a French flag during clashes with police at a demonstration by the “yellow vests” movement in Paris, France, December 8, 2018. Photo by Benoit Tessier/Reuters

Protesters who came to Paris from Normandy described seeing officers block yellow-vested passengers from boarding at stops along their route. The national gendarme service posted a video on Twitter of police tackling a protester and confiscating his dangerous material, which appeared to be primarily a tennis racket.

Macron’s government had warned that the yellow vest protests had created a “monster” and that the Paris actions would be hijacked by radicalized and rebellious crowds and become the most dangerous yet after three weeks of demonstrations.

Demonstrators waving French flags and wearing the movement’s signature neon vests gathered before dawn Saturday near the Arc de Triomphe, then tried to march down the Champs-Elysees toward the presidential palace. Blocked by police, they tried other routes. Protesters threw flares and other projectiles, and were repeatedly pushed back by tear gas. 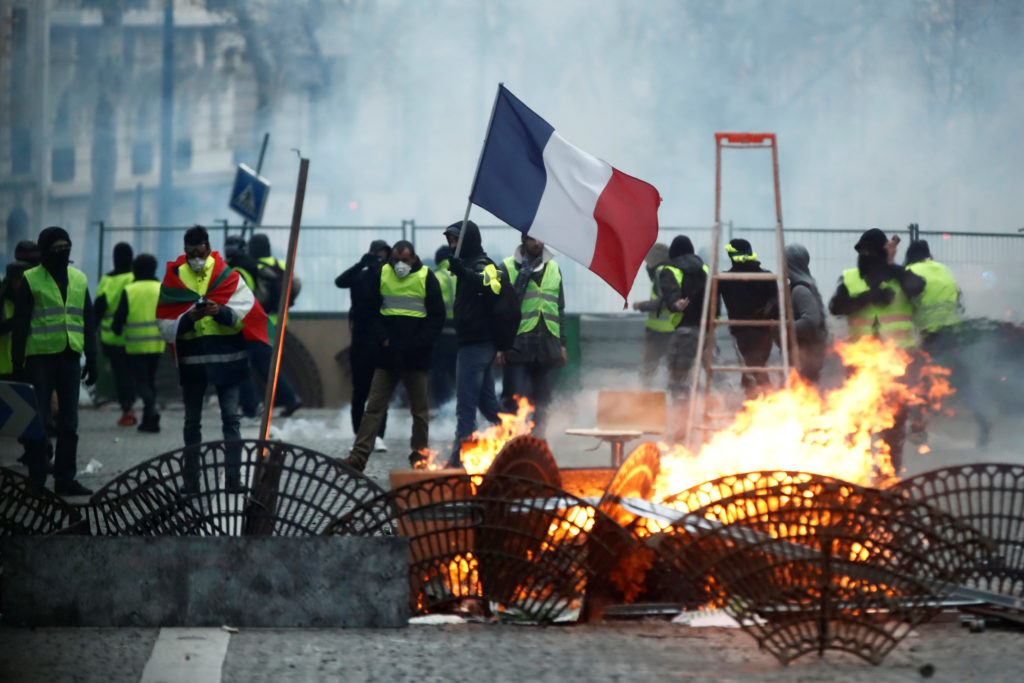 Protesters wearing yellow vests stand behind a barricade as they face off with police during clashes as part of a national day of protest by the “yellow vests” movement in Paris, France, December 8, 2018. Photo by Christian Hartmann/Reuters

Groups in yellow vests also gathered near the iconic Bastille plaza and a few other spots around Paris. The city subway system was shut down in the center of town.

By midday, more than 500 had been detained in Paris, according to a Paris police spokeswoman. No injuries have been reported.

Authorities deployed barricade-busting armored vehicles and 8,000 police in the capital alone; nationwide, some 89,000 security forces fanned out to deter or confront troublemakers expected at multiple protests.

Many members of the protest movement are calling for calm, and some struck a conciliatory tone after meeting the prime minister Friday night. 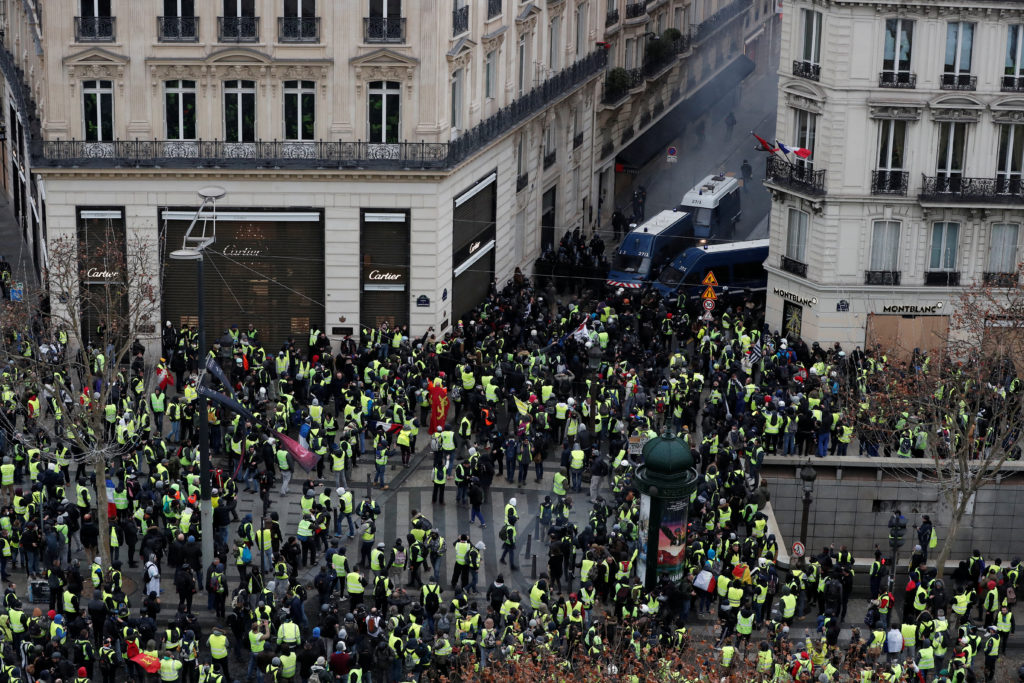 Protesters wearing yellow vests face off with French Gendarmes on the Champs-Elysees Avenue during a demonstration by the “yellow vests” movement in Paris, France, December 8, 2018. Photo by Benoit Tessier/Reuters

But that didn’t deter many people from trying to march on the presidential palace Saturday.

“We are here to tell (Macron) our discontent. Me, I’m not here to break things because I have four children so I am going to try to be safe for them because they are afraid,” protester Myriam Diaz told the Associated Press. “But I still want to be here to say ‘Stop, that’s enough, this has to stop.’”

The movement has no clear leaders, and past protests have attracted extremists who hurled projectiles at police.

Macron himself, the target of the protesters’ ire, has been largely invisible in recent days, leaving his prime minister and government to try to negotiate with protesters.

Four people have been killed in accidents since the unrest began Nov. 17. Christmas markets, national soccer matches and countless other events have been canceled or hurt by the protests.

Parts of Paris looked like they were bracing for a hurricane, with boards on windows covering up the Christmas decorations. Police removed any materials from the streets that could be used as weapons, especially at construction sites in high-risk areas.

Protesters also blocked roads, roundabouts and tollbooths elsewhere in France. Offshoot movements have emerged elsewhere, and yellow-vest protests were held Saturday in Belgium and the Netherlands.