PARIS — With the golden World Cup trophy in hand, France’s victorious national team is returning home to a grand “Merci!” from a grateful nation that was sorely in need of a boost.

“Eternal Happiness” said Monday’s headline in the sports daily L’Equipe, summing up the mood of many who hope this euphoria will last for months — even years.

France was preparing to welcome home the national soccer team Monday for a victory lap down the grand Champs-Elysees, the grand Paris avenue where hundreds of thousands thronged after the team’s 4-2 victory Sunday over Croatia to capture the trophy. 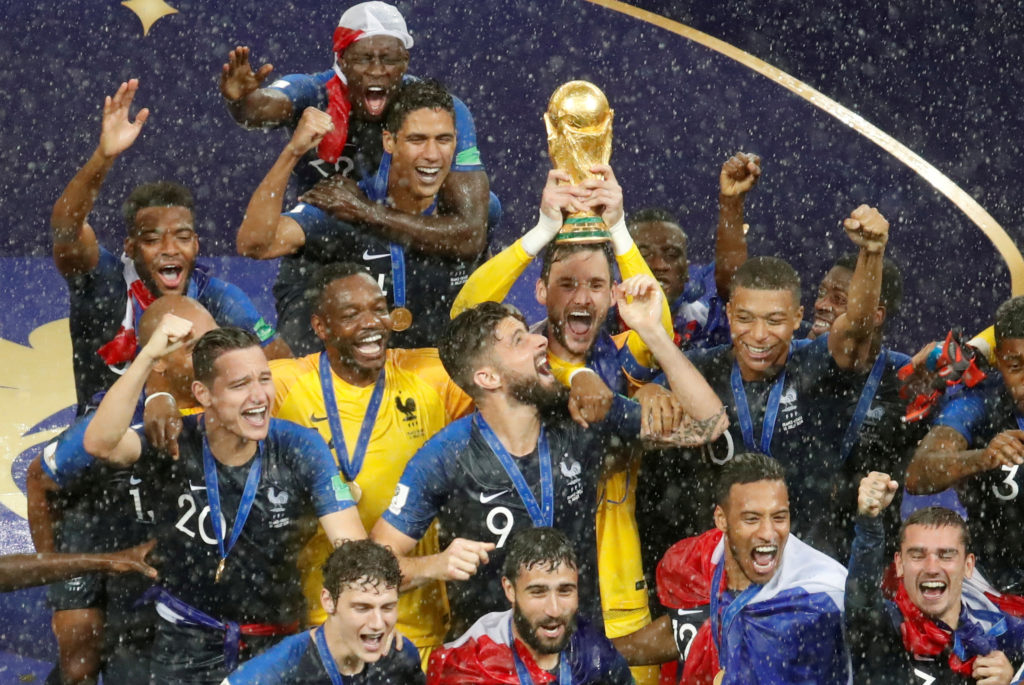 France’s Hugo Lloris lifts the trophy as they celebrate winning the FIFA World Cup after winning the final game against Croatia at Luzhniki Stadium in Moscow, Russia. Photo by Christian Hartmann/Reuters

That will be followed by a reception at the presidential palace, with hundreds of guests, including people from soccer clubs known to the French players, like that of the poor suburb of Bondy, where 19-year-old star Kylian Mbappe grew up.

The Etoiles station is for now “On a 2 Etoiles” (We have 2 stars), to denote France’s second World Cup victory, after one in 1998, while the Victor Hugo station is now Victor Hugo Lloris, after France’s standout goalie and team captain.

Celebrations were spread across the nation, and among still-dazed French players themselves.

“We are linked for life now with this Cup,” defender Raphael Varane told BFM-TV on Monday before departing for home from Moscow. 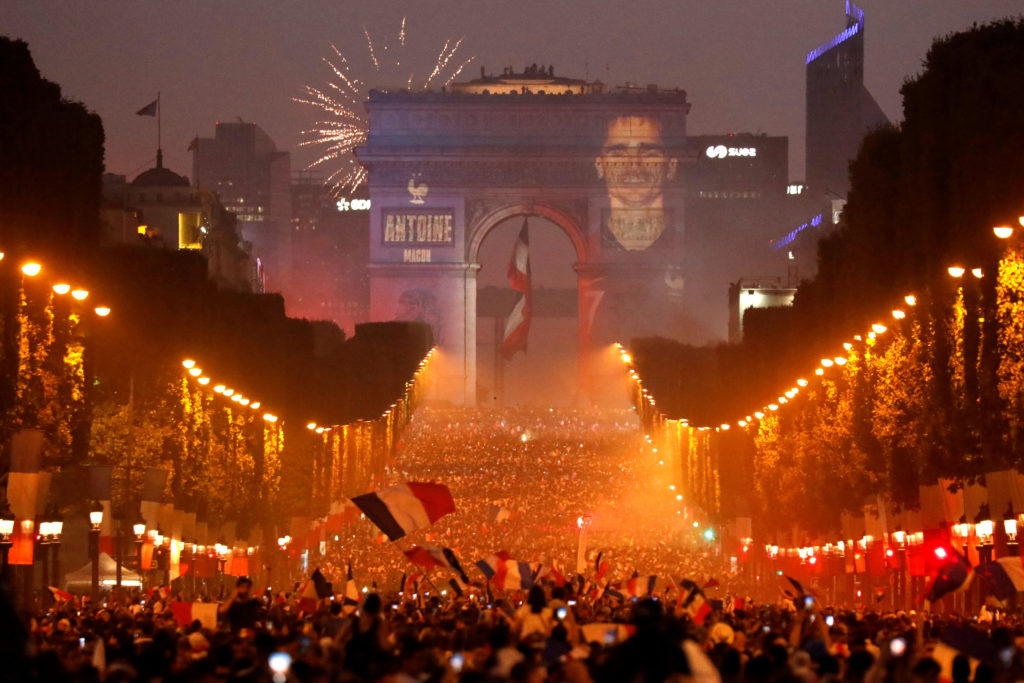 A giant picture of France’s Antoine Griezmann is seen on the Arc de Triomphe as France fans celebrate on the Champs-Elysees Avenue after France won the Soccer World Cup final. Photo by Charles Platiau/Reuters

French President Emmanuel Macron exulted on the field in Moscow, hugging players as they received their medals even as the heavens opened up and poured down on everyone, and congratulating the players again in the locker room. He is clearly hoping the World Cup victory glow rubs off on him, raising him up in a nation that is fiercely protesting his economic reforms.

It’s the players, though, who have captured the French imagination, a mostly youthful, diverse group that represents a generation which traditionalists have yet to come to terms with.

Sports Minister Laura Flessel told Europe-1 radio that the World Cup victory allows France’s youth — like those in the poor suburbs where many of the players grew up — “to dare to believe in their dreams.”

Joy over the victory brightened the Monday morning commute in Paris, with young people in cars still singing and shouting in celebration.

In the eastern Paris neighborhood of Belleville, with the Eiffel Tower visible in the far distance, Vincent Simon said, “Both teams deserved to win. France won, and that’s good for the country. That will do us good for some months.”

Fellow Parisian Florian Scaven only caught glimpses of the World Cup final from the maternity ward, where his wife had a baby during the matched.

“We vibrated with the horns in the street. We are happy. Long live France,” he said. 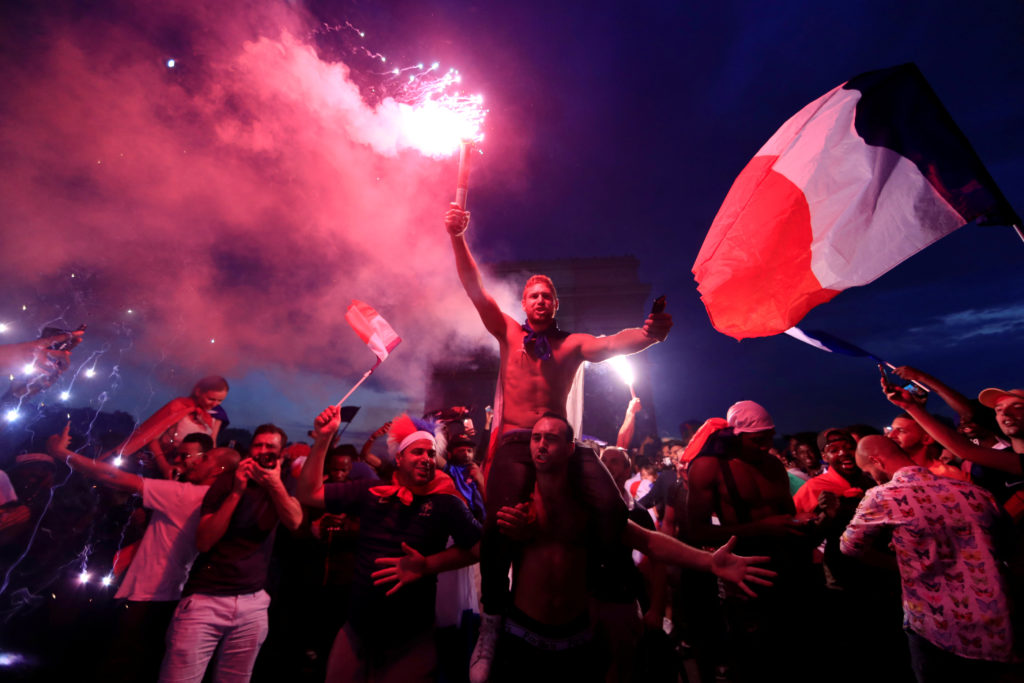 France fans celebrate in front of the Arc de Triomphe on the Champs-Elysees Avenue after France won the Soccer World Cup final. Photo by Gonzalo Fuentes/Reuters

The victory came at a time when many French were in need of good news.

“It represents enormous things,” said Goffrey Hamsik, dressed in a hat resembling a rooster — the French national symbol — and a shirt with Mbappe’s No. 10 number.

“We’ve had lots of problems in France these past years,” he said, recalling deadly terror attacks. “This is good for the morale … Here, we are all united. We mix. There is no religion, there is nothing, and that’s what feels good.”

Still, celebrations in France typically end up with a spate of violence by troublemakers, and Sunday was no exception.

Broken shop windows, pillage and other destruction lined a section of the Champs-Elysees, the postgame site for revelers. Riot police used water cannon and tear gas to end the violence.

French media reported that authorities detained 90 people for questioning in the Paris region and some 290 around France.