Should thousands of ISIS fighters and their families be allowed to return home?

It’s been two weeks since the United States and its allies announced the territorial defeat of the so-called Islamic State. The extremist group, which once controlled wide swaths of Iraq and Syria, has lost significant ground since 2014 thanks in part to the efforts of the U.S.-backed Syrian Democratic Forces and its partners.

President Donald Trump framed ISIS’ defeat as a major victory. Trump made defeating the extremist group one of the central promises of his presidential campaign in 2016, and in recent weeks has taken credit for the group’s demise. But now that ISIS’ caliphate has fallen, the U.S. and other countries that worked to defeat it are faced with a new challenge: whether to repatriate thousands of foreign ISIS fighters, as well as women and children affiliated with the group, who are being held in refugee camps and prisons in northeast Syria and Iraq.

A spokesperson for the Syrian Democratic Forces estimated last week that there are now 12,000 foreign women and children being held in camps in Syria alone, and some 1,000 foreign fighters being held in the country’s prisons.

As it stands, few governments are willing to take them back. While some countries had repatriated former members of ISIS on an ad hoc basis in the past, the fall of the caliphate has forced the U.S. and its allies to seek a more permanent fix.

MORE: After the fall of ISIS caliphate, its capital remains a city of the dead

Many governments fear that welcoming back citizens that willingly joined ISIS would be politically unpopular, as well as a threat to the security of their nations. At the same time, not all women and children affiliated with the extremist group are necessarily guilty of committing atrocities — and leaving them to languish in refugee camps is seen by many human rights organizations as unconscionable.

Here are some of the questions countries are grappling with as they consider whether or not to take responsibility for these citizens.

Why there are so many women and children in limbo

ISIS gained global recognition in the wake of the Arab Spring, when it took advantage of political and sectarian unrest to seize power across Iraq and Syria and establish an Islamic state, known as a caliphate. As of 2017, some 40,000 foreign fighters had traveled to the region, hailing not only from the Middle East and North Africa, but also Western Europe and U.S.

At the same time that the extremist group worked to expand its physical presence in the Middle East, it promoted its ideology aggressively to a global audience on social media platforms such as Twitter and YouTube. In 2014, it broadcast online the brutal beheadings of a number of foreigners, including the American journalists James Foley and Steven Sotloff. The group took credit for hundreds of attacks carried out around the world, killing hundreds in countries such as France, Belgium, Tunisia and the Philippines.

Rather than dealing with the complicated question of whether or not to prosecute these women, most countries have decided to let them stay in camps for now.

As ISIS expanded, the extremist group made women central to its recruiting tactics. As of 2018, as many as 13 percent of ISIS foreign recruits were women, many of whom were lured by the promise of a new society — according to an analysis by The International Centre for the Study of Radicalisation, this was particularly true for Muslim women who found Western society to be oppressive and unwelcoming of their religion. Children were also central to ISIS’ recruiting tactics: a report from King’s College London estimated that 12 percent of individuals who traveled abroad to fight for ISIS between 2013 and 2018 were minors.

Although some of these recruits have since returned to their home countries, thousands are now being held in refugee camps in northeast Syria, including as many as 3,000 children born to members of ISIS.

“Because women haven’t been subject to as many targeted killings as men, there’s more of them still alive, but by that measure we are finding more women in refugee and internally displaced person camps,” said Katherine Brown, a professor of Islamic Studies at the University of Birmingham.

Countries face a unique challenge in dealing with women who traveled abroad to fight for ISIS, Brown said, because it may be hard to prove they actually participated in violence, and because women are typically portrayed as victims, even if they have aided in atrocities committed by ISIS.

“In the past, men could never been constructed as victims in this,” Brown said. “But with women it’s just more complicated. It’s that dual function of being both potentially a victim and a security threat. It’s that combination that seems to make life difficult.”

Rather than dealing with the complicated question of whether or not to prosecute these women, most countries have decided to let them stay in camps for now, she added.

Should countries take responsibility for their own citizens? 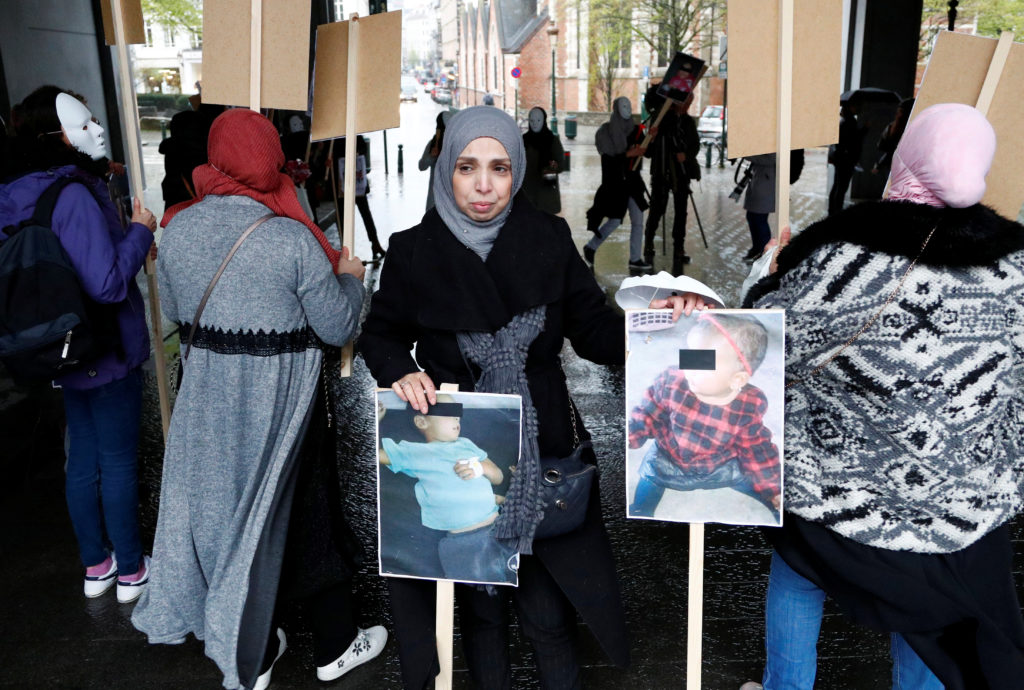 Fatiha, grandmother of children who are currently in Syria, holds placards April 2 during a protest asking the government to bring back the children of Islamic State militants from Syria, in Brussels, Belgium.REUTERS/Francois Lenoir

The U.S. and other nations are in a difficult position when it comes to deciding what to do about these citizens.

The idea of repatriating members of ISIS is “deeply unpopular” said Peter Neumann, who directs the International Centre for the Study of Radicalisation at King’s College London. “Why would you want to take terrorists back into your country? People are happy that they are gone.”

But human rights advocates argued that leaving foreigners in these camps without a means of returning would be unconscionable. There are “legitimate security concerns” about taking back nationals,” said Letta Tayler, a senior researcher with the group Human Rights Watch. But that doesn’t excuse inaction, she said.

“Governments should, in our view, repatriate their nationals — screen them, and prosecute them if necessary,” Tayler said. “And for those who have not committed a crime, governments should focus on rehabilitation and reintegration.”

“There is no strategy. It’s an issue no policy maker wants to deal with.”

Countries, as well as states and cities around the world, have experimented with rehabilitation programs for former ISIS fighters, albeit ones that have chosen to return to their home countries. In the U.S., Minnesota tested such a program in the case of a group of Somali-Americans who had been recruited to join ISIS. In Denmark, the city of Aarhus also pursued a de-radicalization program for ISIS fighters returning home, as did the Ministry of Justice in Germany’s Hesse state.

But what to do with those currently in refugee camps represents a unique challenge that countries do not seem prepared to deal with, said Charles Lister, a senior fellow at the Middle East Institute, who called this situation “unprecedented.”

“There is no strategy,” Lister said. “It’s an issue no policy maker wants to deal with.”

What happens if they aren’t allowed to return home?

For now, the Western countries with the highest number of foreign ISIS fighters have indicated they are unwilling to repatriate these citizens. The United Kingdom recently stripped former ISIS member Shamima Begum of her citizenship after she asked to return home. At the end of February, a court in Belgium ruled that the country was not obligated to repatriate two women who traveled to Syria in allegiance with ISIS, nor the six children the brought with them. France recently repatriated five orphans of ISIS members, but so far has failed to implement a broader strategy. The newspaper “Liberation” reported this week that while the government had been pursuing a program to bring home French citizens that had traveled to Syria to join ISIS, the plan was ultimately thwarted by the Macron administration after a poll indicated it was deeply unpopular among the public.

Trump has encouraged other countries to take back foreign ISIS fighters still being held in these camps. At the beginning of February, the State Department released a statement calling upon other nations “to repatriate and prosecute their citizens.” A few weeks later, the U.S. refused to allow Hoda Muthana, a former University of Alabama student who left for Syria in 2014, back into the country.

Should foreign fighters be left in these camps and prisons, their cases are likely to be dealt with by the Kurds in Syria, or the Iraqis. The Kurds have proposed an international tribunal to deal with the cases, but Lister noted there was no legal framework in place yet and said that any viable solution would likely have to be a multilateral effort.

“Repatriation is the most pressing question facing the international community.”

One thing that most people familiar with the issue seem sure of is that leaving families in limbo could present a security concern going forward.

“Repatriation is the most pressing question facing the international community,” said Fawaz Gerges, a professor at the London School of Economics, who warned that former ISIS members could pose a “tremendous security danger” if they’re left in refugee camps.

“You’re going to have a generation of children brought up in an incredibly isolated environment, who are incredibly at risk of radicalization,” added Brown.

The U.S., for its part, saw a relatively small number of Americans travel abroad to fight for ISIS. But Lister said the U.S. still has in interest in finding a repatriation solution for foreign fighters. “The U.S. government now believes in staying in Syria as part of a counter-ISIS mission,” he said. “If we continue believing in countering ISIS, we need to come up with a solution.”

Left: FILE PHOTO: Belgian women Tatiana Wielandt and Bouchra Abouallal, both 26, who joined Islamic State in Syria are pictured in Ain Issa, Syria March 10, 2019. While some countries have repatriated former members of ISIS on an ad hoc basis in the past, the fall of the caliphate has forced the U.S. and its allies to seek a more permanent fix. REUTERS/Issam Abdallah/File Photo.