CONAKRY, Guinea — Mutinous soldiers in the West African nation of Guinea detained President Alpha Conde on Sunday after hours of heavy gunfire rang out near the presidential palace in the capital, then announced on state television that the government had been dissolved in an apparent coup d’etat.

The country’s borders were closed and its constitution was declared invalid in the announcement read aloud on state television by army Col. Mamadi Doumbouya, who told Guineans: “The duty of a soldier is to save the country.”

It was not immediately known, though, how much support Doumbouya had within the military or whether other soldiers loyal to the president of more than a decade might attempt to wrest back control.

The West African regional bloc known as ECOWAS quickly condemned the developments, threatening sanctions if Conde was not immediately released. U.N. Secretary-General Antonio Guterres tweeted that he strongly condemned “any takeover of the government by force of the gun.”

Conde’s whereabouts had been unknown for hours after the intense fighting Sunday in downtown Conakry until a video emerged showing the 83-year-old leader tired and disheveled in military custody. It was not immediately known when or where the video was taken, though a soldier’s voice can be heard asking Conde whether the putschists had harmed him in any way.

Doumbouya, the commander of the army’s special forces unit, later addressed the nation from state television headquarters, draped in a Guinean flag with about a half dozen other soldiers flanked at his side.

“We will no longer entrust politics to one man. We will entrust it to the people,” Doumbouya said, without mentioning Conde by name. 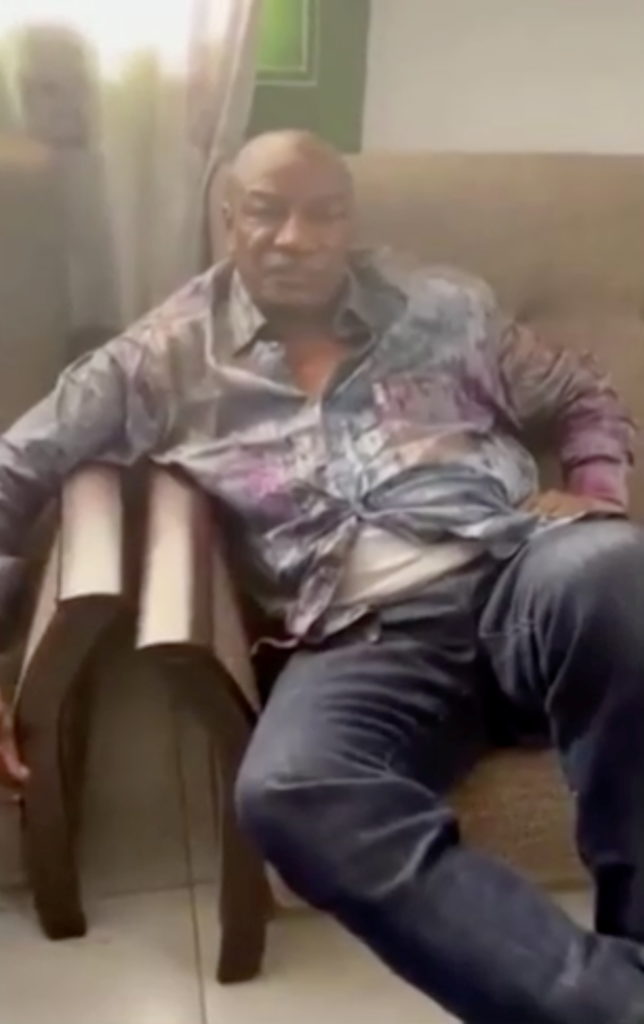 A screen grab from a video shared on social media, but not yet authenticated, claimed to show Guinea’s President Alpha Conde detained by army special forces, in Conakry, Guinea September 5, 2021. Video obtained by Reuters on September 5, 2021.

He later confirmed to France 24 television that Conde was in a “secure spot” and had seen a doctor.

A former U.S. diplomat in Conakry confirmed to The Associated Press that the president had been taken into custody by the putschists. The diplomat, who was in contact with Guinean officials, spoke on condition of anonymity due to the sensitivity of the matter.

Conde, in power for more than a decade, had seen his popularity plummet since he sought a third term last year, saying that term limits did not apply to him. Sunday’s dramatic developments underscored how dissent had mounted within the military as well.

In Sunday’s speech, Doumbouya called on other soldiers “to put themselves on the side of the people” and stay in their barracks. The army colonel said he was acting in the best interests of the nation, citing a lack of economic progress by leaders since the country gained independence from France in 1958.

Observers, though say the tensions between Guinea’s president and the army colonel stemmed from a recent proposal to cut some military salaries.

On Sunday morning, heavy gunfire broke out near the presidential palace and went on for hours, sparking fears in a nation that already has seen multiple coups and presidential assassination attempts. The Defense Ministry initially claimed that the attack had been repelled by security forces, but uncertainty grew when there was no subsequent sign of Conde on state television or radio.

The developments that followed closely mirrored other military coup d’etats in West Africa: The army colonel and his colleagues seized control of the airwaves, professing their commitment to democratic values and announcing their name: The National Committee for Rally and Development.

It was a dramatic setback for Guinea, where many had hoped the country had turned the page on military power grabs.

Many had hoped Conde’s 2010 election victory — the country’s first democratic vote ever — would be a fresh start for a country that had been mired by decades of corrupt, authoritarian rule and political turmoil. In the years since, though, opponents said Conde too failed to improve the lives of Guineans, most of whom live in poverty despite the country’s vast mineral riches of bauxite and gold.

The year after his first election he narrowly survived an assassination attempt after gunmen surrounded his home overnight and pounded his bedroom with rockets. Rocket-propelled grenades landed inside the compound and one of his bodyguards was killed.

Violent street demonstrations broke out last year after Conde organized a referendum to modify the constitution. The unrest intensified after he won the October election, and the opposition said dozens were killed during the crisis.

Guinea has had a long history of political instability. In 1984, Lansana Conte took control of the country after the first post-independence leader died. He remained in power for a quarter century until his death in 2008.

A second coup soon followed, leaving army Capt. Moussa “Dadis” Camara in charge. During his rule, security forces opened fire on demonstrators at a stadium in Conakry who were protesting his plans to run for president. Human rights groups have said more than 150 people were killed and at least 100 women were raped. Camara later went into exile after surviving an assassination attempt, and a transitional government organized the landmark 2010 election won by Conde.

Left: Residents cheer at army soldiers as they celebrate the uprising in Conakry, Guinea September 5, 2021. Photo by Souleymane Camara/Reuters.