MOGADISHU, Somalia — Islamic extremists blew up the gate of a Somali hotel with a car bomb and took over the building for more than 14 hours, leaving 26 people dead before Somali forces who besieged the hotel overnight killed the attackers. The victims included a prominent Canadian-Somali journalist.

Three Kenyans, three Tanzanians, two Americans and a Briton also were among the dead, said Ahmed Madobe, the president of Jubbaland regional state which controls Kismayo. Fifty-six people, including two Chinese, were injured in the hotel attack, he told reporters.

At least four al-Shabab assailants attacked the Asasey Hotel Friday evening, beginning with a suicide car bomb at the entrance gate and followed by an assault by gunmen who stormed the hotel, which is frequented by politicians, patrons and lawmakers.

Somalia’s Islamic extremist rebels, al-Shabab, claimed responsibility for the attack. Al-Shabab, which is allied to al-Qaida, often uses car bombs to infiltrate heavily fortified targets like the hotel in Kismayo, which has been relatively quiet in recent years.

The attack is a blow to the Somalia government’s efforts to hold nation-wide, one-person one-vote elections next year.

Security officials cordoned off the site of the attack and prevented journalists from taking photos or video of the damaged hotel and in some cases destroyed journalists’ cameras. Government officials have not been available for further interviews. 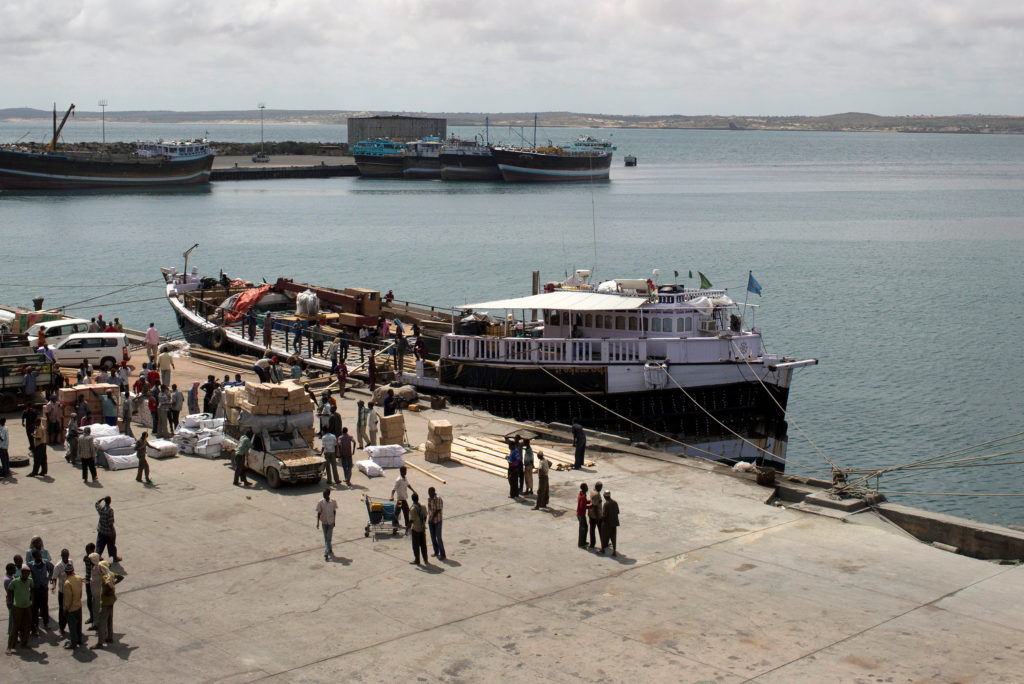 FILE PHOTO: Workers stand at the sea port of the coastal town of Kismayu in southern Somalia November 12, 2013. Photo By Siegfried Modola/Reuters

“I’m absolutely devastated by the news of the death of our dear sister Hodan Nalayeh and her husband in a terrorist attack in Somalia today. What a loss to us. Her beautiful spirit shined through her work and the way she treated people,” Omar Suleiman, a Texas-based imam who knew the victim, wrote on social media.

Nalayeh was born in Somalia in 1976, but spent most of her life in Canada, first in Alberta and then in Toronto. She founded Integration TV, an international web-based video production company aimed at Somali viewers around the world. She was the first Somali woman media owner in the world.

Canadian Minister of Immigration, Refugees and Citizenship Ahmed Hussen mourned Hodan Nalayeh’s death on Twitter, saying she “highlighted the community’s positive stories and contributions in Canada” through her work as a journalist. “We mourn her loss deeply, and all others killed in the #KismayoAttack,” he wrote.

“In Ontario, Hodan launched @IntegrationTV to tell the beautiful stories of the Somali Diaspora, and took that same humanity and love to her reporting and storytelling in Somalia. My thoughts are with her family, and the victims of the #Kismayo attack during this horrific time.”

A top official of the African Union condemned the attack.

“This is an attack meant to derail progress in Somalia as the country rebuilds and consolidates the gains made on peace and security,” said Francisco Madeira, special representative of the chairman of the African Union Commission. “Somalia has made tremendous progress in seizing territory and pushing out the terrorists from many places across the country.”

He said the African Union’s multinational force in Somalia will continue to work to stabilize the country.

Left: TOPSHOT - A man passes in front of the rubbles of the popular Medina hotel of Kismayo on July 13, 2019, a day after at least 26 people, including several foreigners, were killed and 56 injured in a suicide bomb and gun attack claimed by Al-Shabaab militants. - A suicide bomber rammed a vehicle loaded with explosives into the Medina hotel in the port town of Kismayo before several heavily armed gunmen forced their way inside, shooting as they went, authorities said. (Photo by/AFP/Getty Images.