COLOMBO, Sri Lanka — Militants linked to Easter suicide bombings opened fire and set off explosives during a raid by Sri Lankan security forces on a house in the country’s east, leaving behind a grisly discovery Saturday: 15 bodies, including six children.

The gunbattle that began Friday night and the carnage that followed come amid widespread fear of more attacks as officials hunt for militants with explosives believed to still be at large after the coordinated bombings of churches and luxury hotels that killed more than 250 people nearly a week ago.

Raids and police curfews have shut down areas of eastern Sri Lanka, and Catholic leaders have canceled Sunday Masses indefinitely. Officials also urged Muslims to stay home for prayers in an extraordinary call by the clergy to curtail worship. 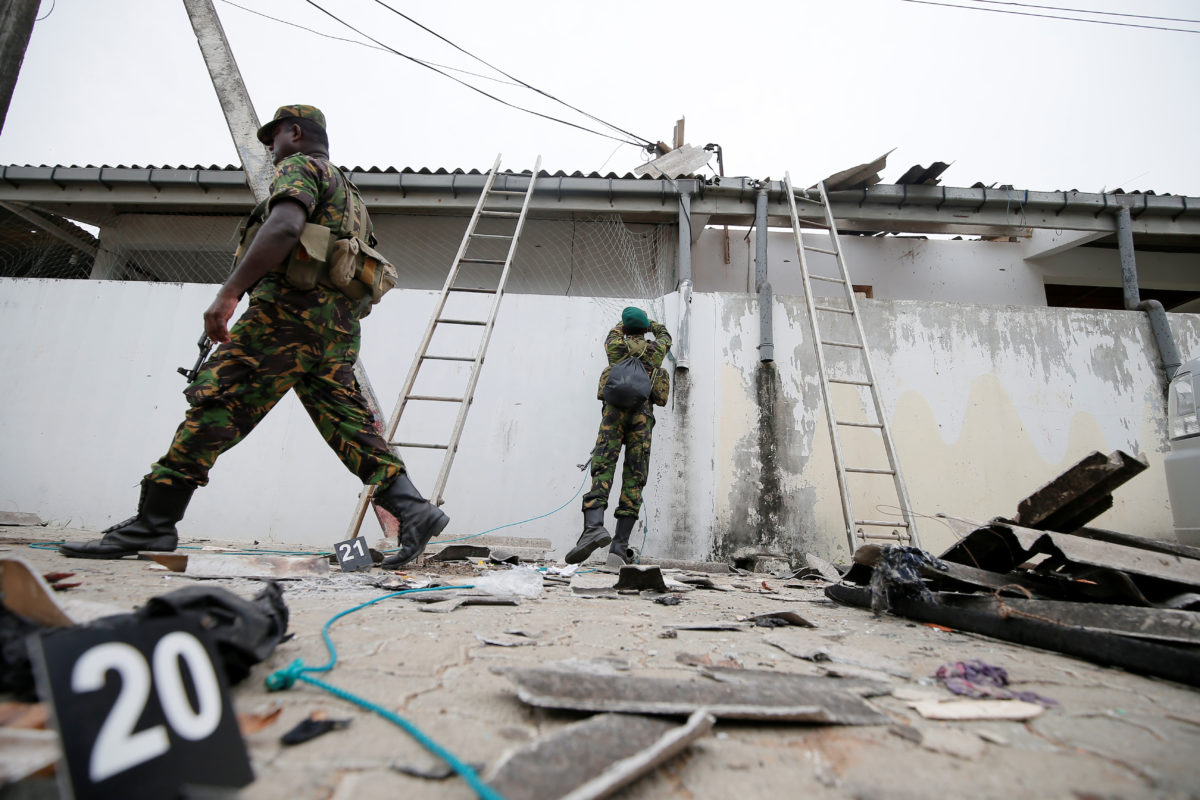 Security personnel seen at the site of an overnight gun battle between troops and suspected Islamist militants, on the east coast of Sri Lanka, in Kalmunai, April 27, 2019. Photo by Dinuka Liyanawatte/Reuters

The gunfight Friday came after police tipped off soldiers about a suspected safe house near the town of Sammanthurai, where authorities said the militants detonated three explosions and opened fire.

Police spokesman Ruwan Gunasekara said some of the dead likely were militants who blew themselves up in suicide bombings. Earlier, the military said at least one civilian had been killed in the attack.

A girl and a woman survived the explosion at the suspected safe house but were critically injured and being treated at a hospital, Gunasekara said.

Photographs taken by The Associated Press show the charred remains of one child and the body of another wearing a green T-shirt with the words “good boy” written on the back. The bodies of an adult woman and man were found after the explosion with their clothes burned off.

Gunasekara said officers acting on information from intelligence officials also found 150 sticks of blasting gelatin and 100,000 small metal balls, as well as a van and clothing suspected of being used by those involved in the Easter attacks. Suicide bomb vests often are packed with such balls to increase the shrapnel in the explosion, making them even deadlier.

Fear of more attacks has led to increased security at churches, shrines, temples and mosques across the multiethnic island nation of 21 million off the southern coast of India.

Cardinal Malcolm Ranjith, the archbishop of Colombo, told reporters Friday that church officials had seen a leaked security document describing Roman Catholic churches and other denominations as a major target. He asked the faithful across Sri Lanka to stay home for their own safety.

It was an extraordinary request for a Catholic clergyman to make, as churches often remain a refuge. Giovanni Maria Vian, a church historian and emeritus editor of the Vatican newspaper, said he believed it was the first time the church had canceled Masses across a country for security reasons.

In Galle Face, a normally crowded ocean side park in Colombo near some of the hotels that were bombed, only a few people could be seen Saturday. Kiosks were closed and traffic was lighter than usual, with security officials blocking streets and checking vehicles at barricades. 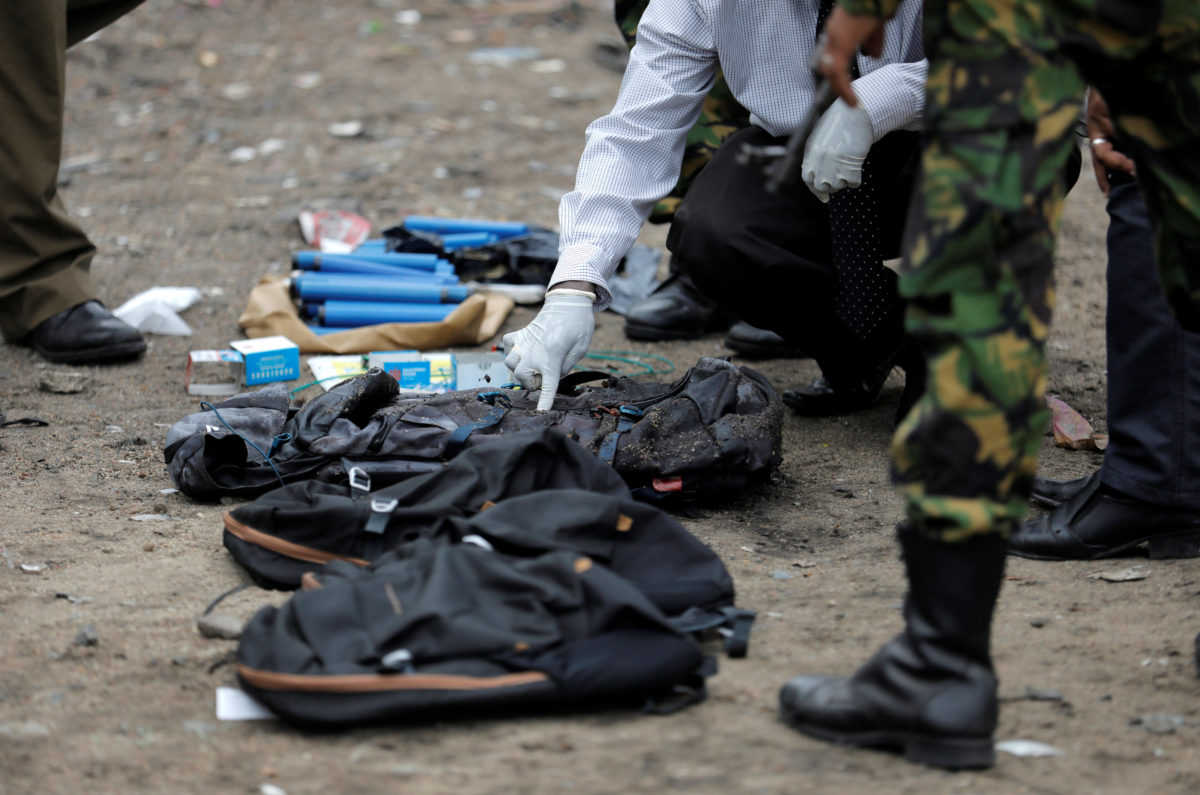 Backpacks, explosive materials and other items are seen at the site of an overnight gun battle, between troops and suspected Islamist militants, on the east coast of Sri Lanka, in Kalmunai, April 27, 2019. Photo by Dinuka Liyanawatte/Reuters

Yashwant Kumar Singh, 23, a worker from India, said he wants to go back to his homeland because he fears another attack. “If it only happened on one day, then that wouldn’t have been so difficult, but bombs are going off here every day. That is why there is an atmosphere of fear. We are feeling very scared,” he said.

Meanwhile, cleaning crews worked at St. Anthony’s Shrine in Colombo, the capital, where broken glass still littered a blood-stained floor, the remnants of one of the Easter attacks. They collected debris, tossing it into a truck parked outside as a heavy contingent of security forces stood guard.

The U.S. Embassy in Sri Lanka has warned the public to stay away from places of worship over the weekend, a stark alert underlining that authorities believe attackers remain at large.

Authorities told Muslims to worship at home rather than attend communal Friday prayers that are the most important religious service of the week, but several mosques held services anyway. At a mosque in Colombo, police armed with Kalashnikov assault rifles stood guard outside for hundreds of worshippers.

The Easter attackers are “not Muslims. This is not Islam. This is an animal,” said Akurana Muhandramlage Jamaldeen Mohamed Jayfer, the chairman of the mosque. “We don’t have a word (strong enough) to curse them.”

There were also reports by some Muslims of harassment because of their religion.

A local television channel showed people on a bus asking a Muslim woman wearing a traditional burqa to either remove it or leave the bus. She later left the bus.

Abdul Azeez Abdul Sattar, 63, an auto-rickshaw driver, said a man in his neighborhood refused to hire him, telling him, “You are a terrorist; you have a bomb. I won’t take your auto.” 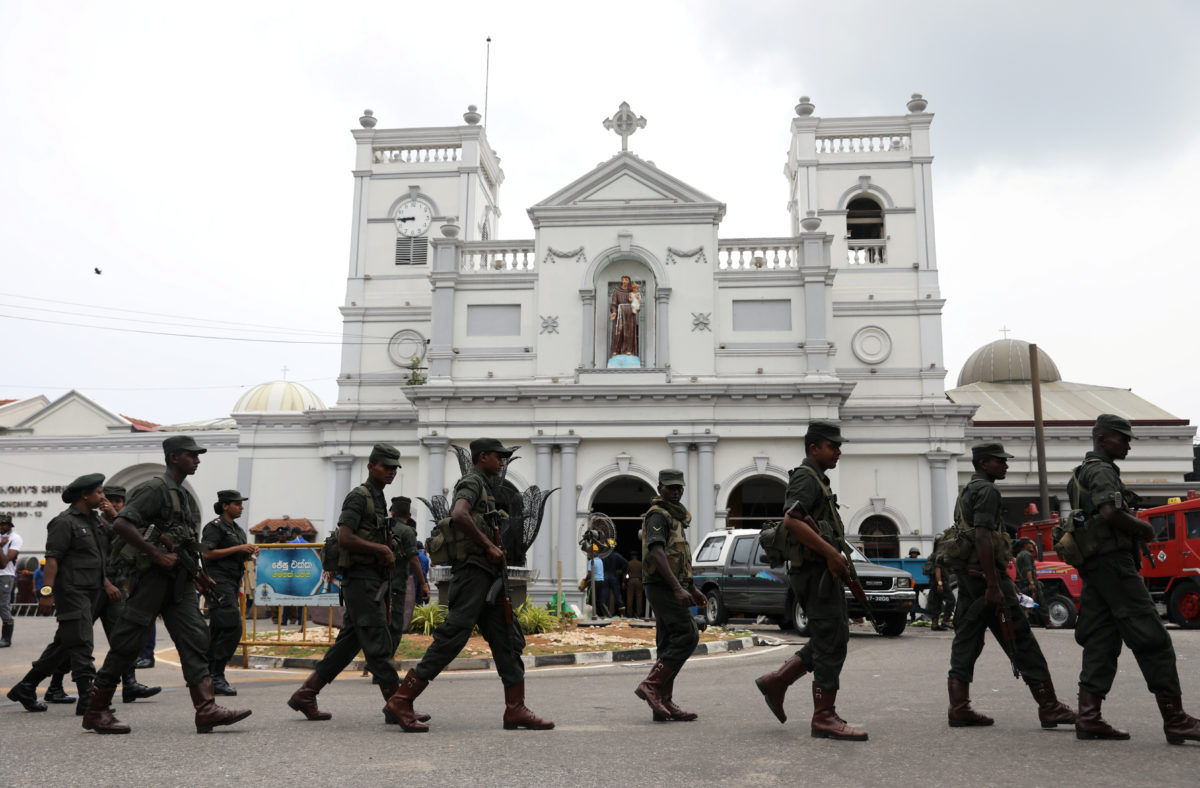 Soldiers and police officers walk past St. Anthony’s Shrine, days after a string of suicide bomb attacks on churches and luxury hotels across the island on Easter Sunday, in Colombo, Sri Lanka April 27, 2019. Photo by Athit Perawongmetha/Reuters

“People are shocked, because this came years after the war ended, and after all these years, we have been living in peace,” said Pradeep Kumara, 36, a clerk at a private company, referring to Sri Lanka’s long civil war, which ended in 2009. “This has disrupted our work, and our ordinary and normal life. We don’t want to go back to that troublesome period.”

Sri Lanka’s government, crippled from a long political crisis between the president and prime minister last year, promised swift action to capture militants still at large. President Maithripala Sirisena said about 140 people had been identified as having links to the Islamic State group.

A “major search operation has been undertaken,” Sirisena said. “Every household in the country will be checked.”

On Friday, police confirmed that the leader of the local militant group blamed for the attack, Mohamed Zahran, died in the suicide bombing at the Shangri-La Hotel, one of six hotels and churches attacked. Zahran appeared in an Islamic State video claiming responsibility for the coordinated assault, and authorities in both Sri Lanka and Australia confirmed links between IS and the attack.

Left: A woman, who has been relocated to a school building due to an overnight gun battle between troops and suspected Islamist militants on the east coast of Sri Lanka, reacts in Kalmunai, April 27, 2019. Photo by Dinuka Liyanawatte/Reuters