Sudanese to name civilian council in bid to pressure army

KHARTOUM, Sudan — Sudanese protest organizers say they will announce a civilian transitional council on Sunday in a bid to exert more pressure on the military to hand over power following the overthrow of long-ruling President Omar al-Bashir earlier this month.

The Sudanese Professionals Association led four months of protests that eventually ended al-Bashir’s 30-year reign, which was marred by multiple armed conflicts and widespread corruption. The umbrella group of unions says more than 100 people were killed by security forces since December, when the protests were sparked by a hike in the price of basic goods.

The Sudanese military overthrew and arrested al-Bashir on April 11, and has appointed a military council that says it will rule for up to two years while elections are organized. The military has arrested senior officials from al-Bashir’s government and sacked top judges and prosecutors. 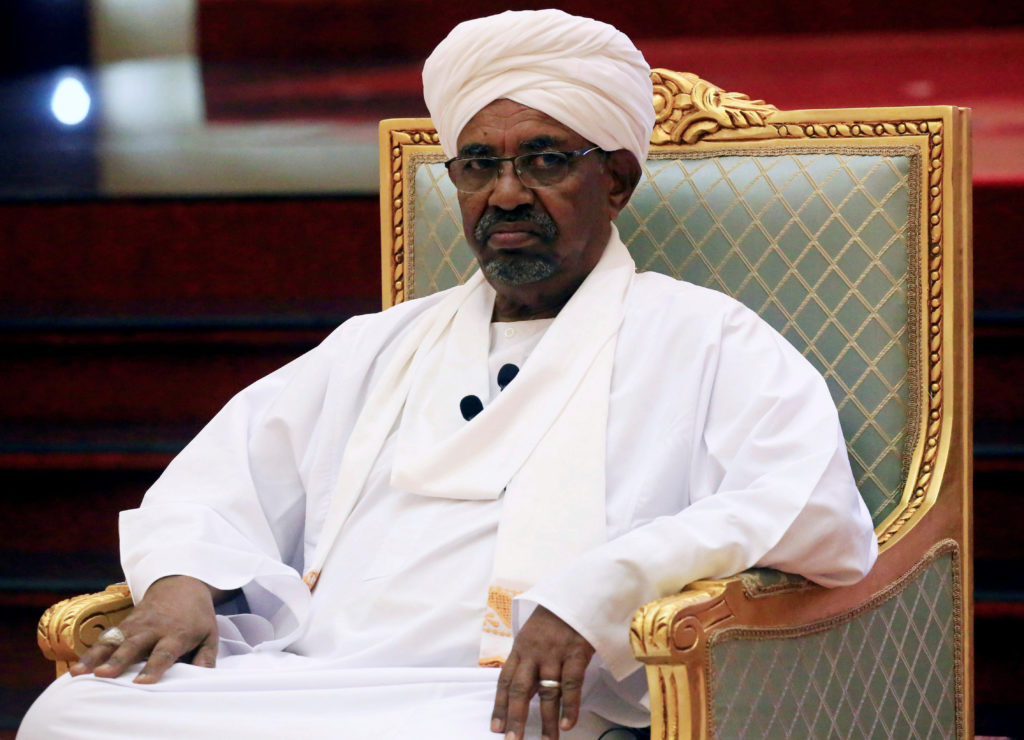 Gen. Abdel-Fattah Burhan, the head of the military council, told state TV Sunday that the council is “ready to hand over power tomorrow to a civilian government agreed by political forces.”

“Our role is to complete the uprising and the blessed revolution,” he added.

The protesters fear the military — which is still dominated by al-Bashir appointees — will cling to power, and have demanded an immediate transition to a civilian body that would govern for four years.

Mohammed al-Asam, a senior member of the SPA, told The Associated Press late Saturday that “we are ready with a clear plan for a transition with qualified names.”

The association said it will announce the names at a press conference later Sunday outside the military’s headquarters in Khartoum, where thousands of protesters have kept up a sit-in since April 6.

“We want a civil council immediately with a military representation. This is our demand,” said al-Asam, who was detained for more than three months before being released after al-Bashir’s ouster. He was held in the Koper prison in the capital, where al-Bashir and other top officials now reside. 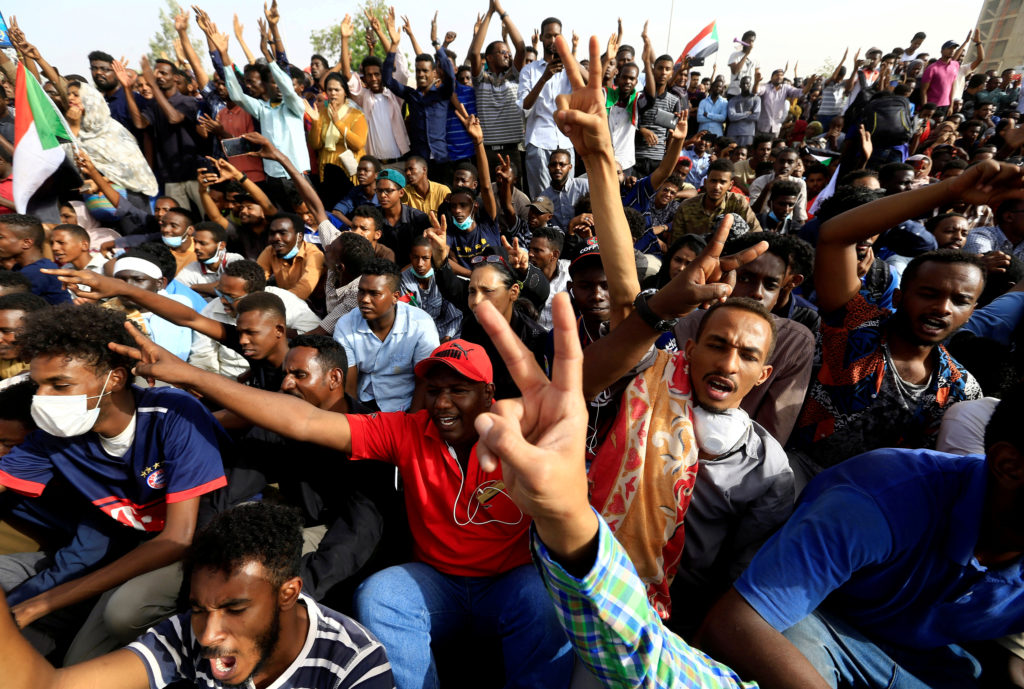 Sudanese demonstrators cheer as they attend a protest rally demanding Sudanese President Omar Al-Bashir to step down outside the Defence Ministry in Khartoum, Sudan, April 11, 2019. Photo by Reuters

The 28-year-old doctor urged the international community to press the military to hand over power to civilians. He said the military council is becoming more powerful every day and that “this is dangerous to the revolution.”

Burhan said the military council will send a delegation to the United States later this month for talks on removing Sudan from the U.S. list of state sponsors of terror, a designation that dates back to the early 1990s, when the country briefly hosted Osama bin Laden.

“We expect a breakthrough in this issue,” he said.

The military has also reached out to the African Union, saying it is working to “create an environment so political forces can rule in a peaceful and democratic way,” according to the state-run SUNA news agency. 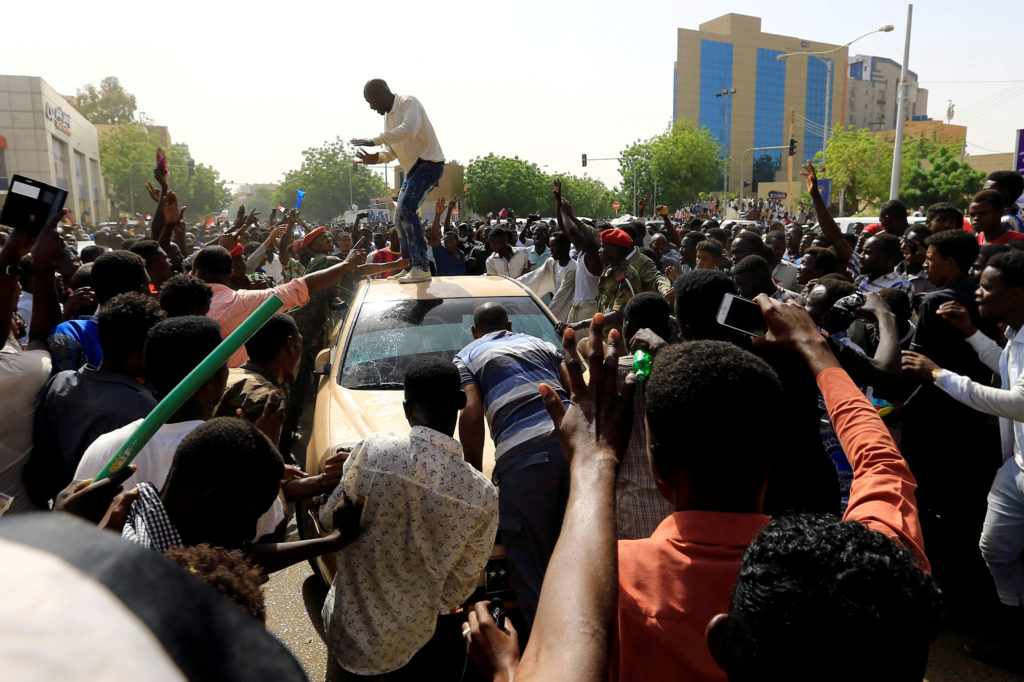 Sudanese demonstrators block the vehicle of a military officer as they chant slogans as they protest against the army’s announcement that President Omar al-Bashir would be replaced by a military-led transitional council, in Khartoum, Sudan April 11, 2019. photo by Stringer/Reuters

The African Union on Monday gave Sudan’s military 15 days to hand over power to a “civilian-led political authority” or face suspension from AU activities. The AU said a civilian authority should hold elections “as quickly as possible.”

Saudi Arabia and the United Arab Emirates meanwhile announced a $3 billion aid package for Sudan. The Saudi state-run news agency said Sunday that $500 million would be deposited in Sudan’s central bank, while the remaining amount will be used to purchase food, medicine and fuel.

Burhan said authorities recently searched a presidential residence, where they found more than 7 million euros ($7.8 million) and $350,000 in U.S. currency. The protesters have accused al-Bashir and his family of pillaging state resources during his three decades in power.

Left: Sudanese demonstrators wave their national flags as they chant slogans, during the sit-in protest outside Defence Ministry in Khartoum, Sudan April 18, 2019. Photo by a stringer/ Reuters