Sunday Mass canceled across Sri Lanka a week after bombings

COLOMBO, Sri Lanka — Catholic leaders canceled Sunday Masses indefinitely across Sri Lanka and officials urged Muslims to stay home for Friday prayers in an extraordinary call by the clergy to curtail worship as fear of more attacks plagued the island nation after the deadly suicide bombings on Easter.

Shops were closed, streets were empty and heavy security patrols continued across the country despite police saying the alleged mastermind of the attacks that killed over 250 people had died in one of the suicide blasts. 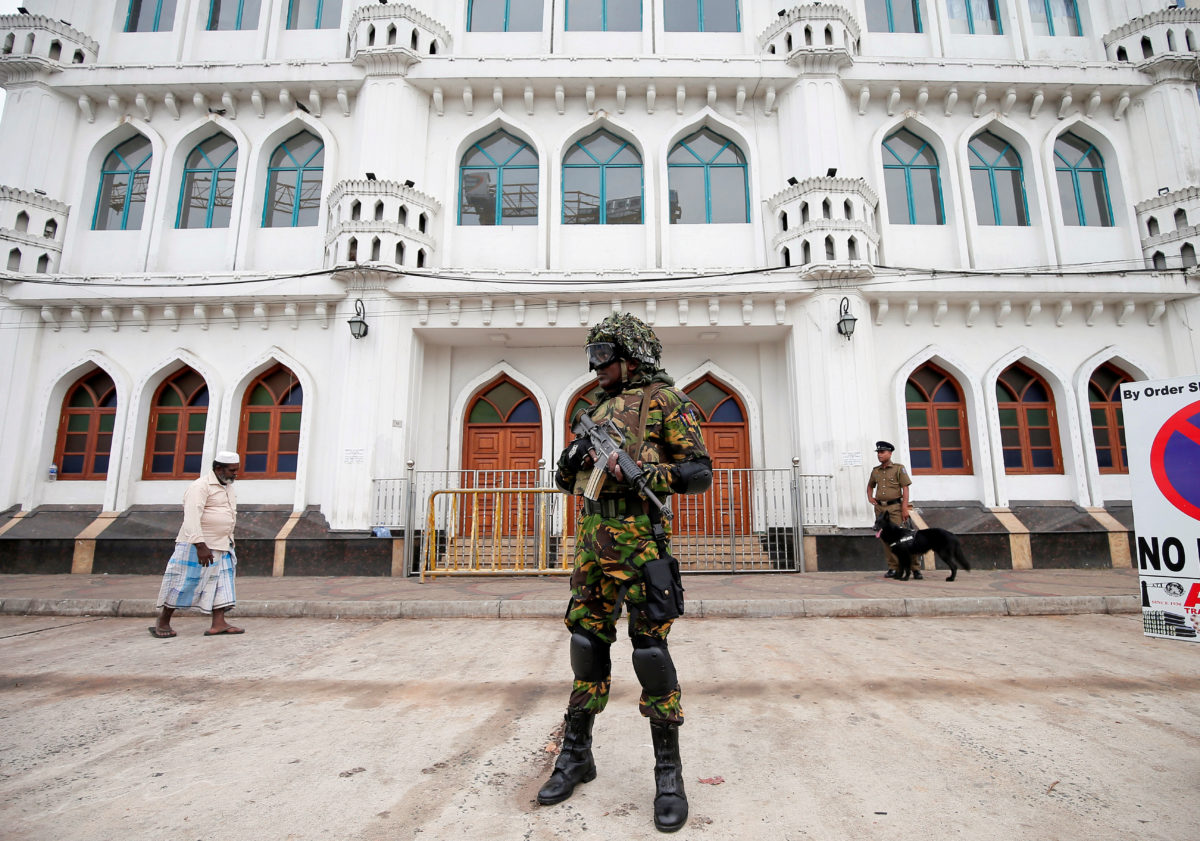 Sri Lankan Special Task Force soldiers stand guard in front of a mosque as a Muslim man walks past him during the Friday prayers at a mosque, five days after a string of suicide bomb attacks on Catholic churches and luxury hotels across the island on Easter Sunday, in Colombo, Sri Lanka April 26, 2019. Photo by Dinuka Liyanawatte/Reuters

Those Sri Lankans who did venture out spoke about the fear encompassing daily life at a level unseen since a long civil war ended a decade ago. Many are angry that the government, paralyzed by internal disputes, hadn’t acted on intelligence obtained weeks before Easter that warned of the attacks.

On Friday night, Sri Lanka’s military said its soldiers in the eastern part of the country engaged in a gunbattle with suspects believed to be linked to the attacks, and police announced a 24-hour curfew until further notice in the Muslim-dominated area where the shooting took place.

Continuing government confusion in its investigation — from drastically lowering the death toll to misidentifying a Brown University student as a militant — only added to the public’s worries.

“Everyone is nervous,” said Abdullah Mohammed, a 48-year-old Muslim in Colombo. “Not just the Muslims. Buddhists, Christians, Hindus — everybody’s nervous.”

Officials from the police to the prime minister say militants remain on the loose and have access to explosives. That has led to increased security at shrines, churches, temples and mosques across the multiethnic country of 21 million off the southern coast of India. 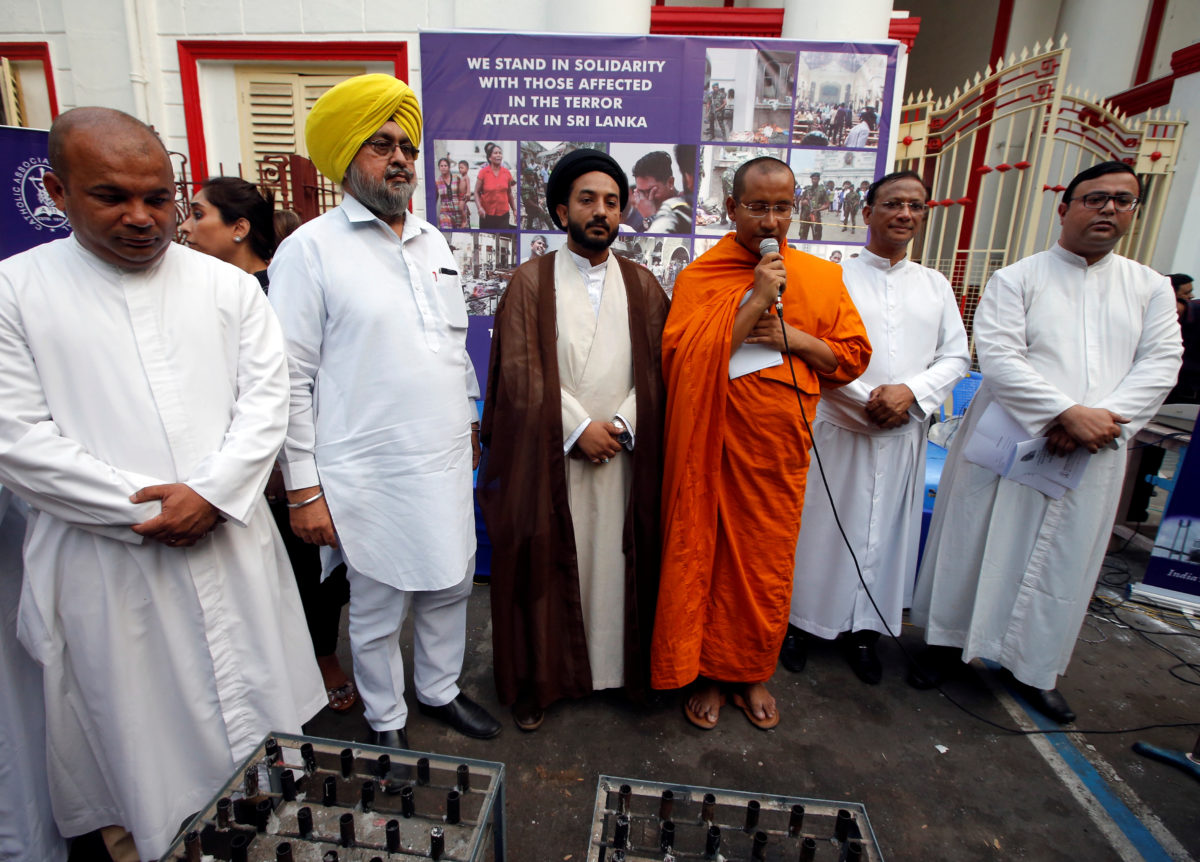 Multi-faith priests attend at a prayer meeting to show solidarity with the victims of Sri Lanka’s serial bomb blasts, outside a church in Kolkata, India, April 23, 2019. Photo by Rupak De Chowdhuri/Reuters

Cardinal Malcolm Ranjith told journalists that church officials had seen a leaked security document describing Roman Catholic churches and other denominations as a major target. Ranjith, who is the archbishop of Colombo, asked the faithful across Sri Lanka to stay home for their own safety.

It was an extraordinary request for a Catholic clergyman to make, as churches often remain a refuge. It came on the day that priests allowed journalists inside one of the bombed churches, St. Anthony’s Shrine in Colombo, where broken glass littered a blood-stained floor. Giovanni Maria Vian, a church historian and emeritus editor of the Vatican newspaper, said he believed it was the first time the church had canceled Masses across a country for security reasons.

The U.S. Embassy in Sri Lanka also warned the public to stay away from places of worship over the weekend, a stark alert underlining that authorities believe that attackers remain at large.

Authorities told Muslims to worship at home rather than attend communal Friday prayers that are the most important religious service of the week, but several mosques held services anyway. At a mosque in Colombo, police armed with Kalashnikov assault rifles stood guard outside for hundreds of worshippers as the imam inside and others wept while praying to Allah to help their country. 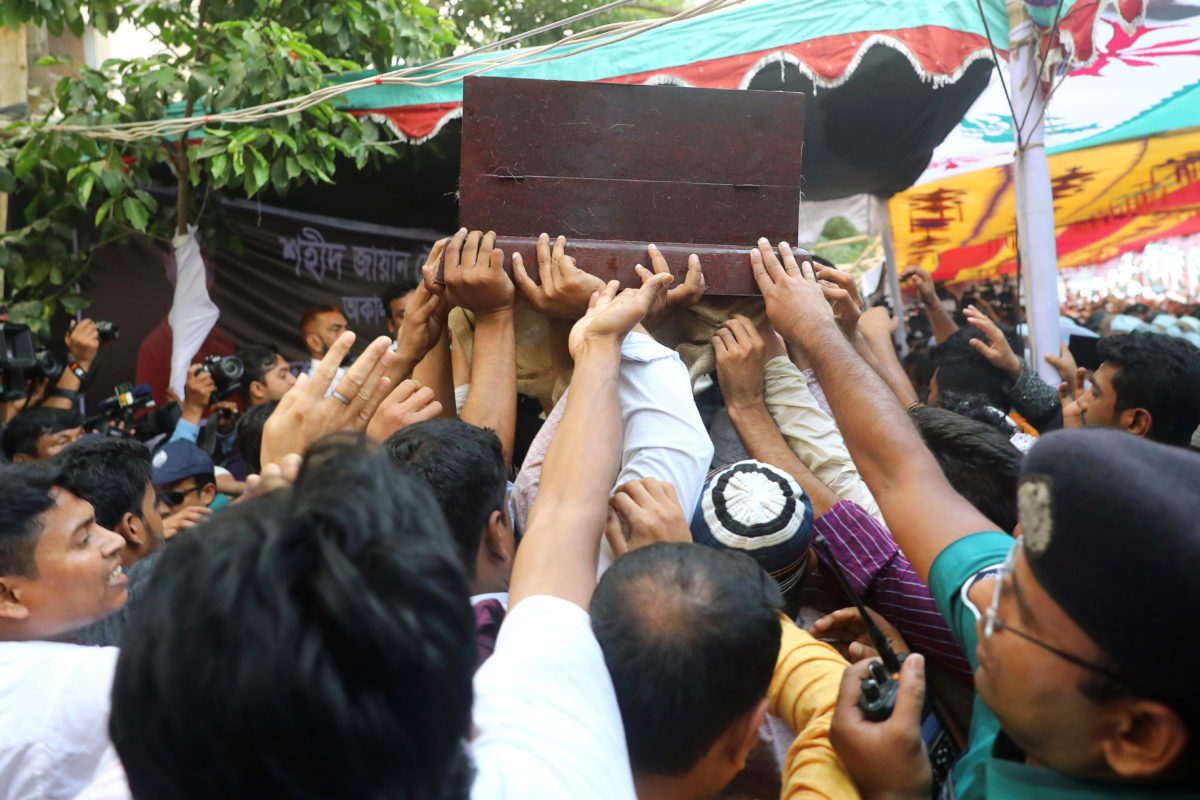 Relatives carry the coffin of Bangladeshi boy killed in one of the Sri Lankan blasts, during a funeral in Dhaka, Bangladesh, April 24, 2019. Photo by Mohammad Ponir Hossain/Reuteres

The Easter attackers are “not Muslims. This is not Islam. This is an animal,” said Akurana Muhandramlage Jamaldeen Mohamed Jayfer, the chairman of the mosque. “We don’t have a word (strong enough) to curse them.”

Sri Lanka’s government, crippled from a long political crisis between the president and prime minister last year, promised swift action to capture militants still at large. President Maithripala Sirisena said about 140 people had been identified as having links to the Islamic State group.

A “major search operation has been undertaken,” Sirisena said. “Every household in the country will be checked.”

On Friday night, soldiers raiding a house in Sri Lanka’s Eastern Province fought a gunbattle with suspected militants linked to the bombings, said military spokesman Brig. Sumith Atapattu. After a couple of hours, he said soldiers were “engaged in a clearing operation,” adding that some casualties were possible.

In the same area, police spokesman Ruwan Gunasekara said officers acting on information from intelligence officials found 150 sticks of blasting gelatin and 100,000 small metal balls, as well as a van and clothing suspected to be used by those involved in the Easter attack. Suicide bomb vests often are packed with such balls to increase the shrapnel in the explosion, making them even deadlier. 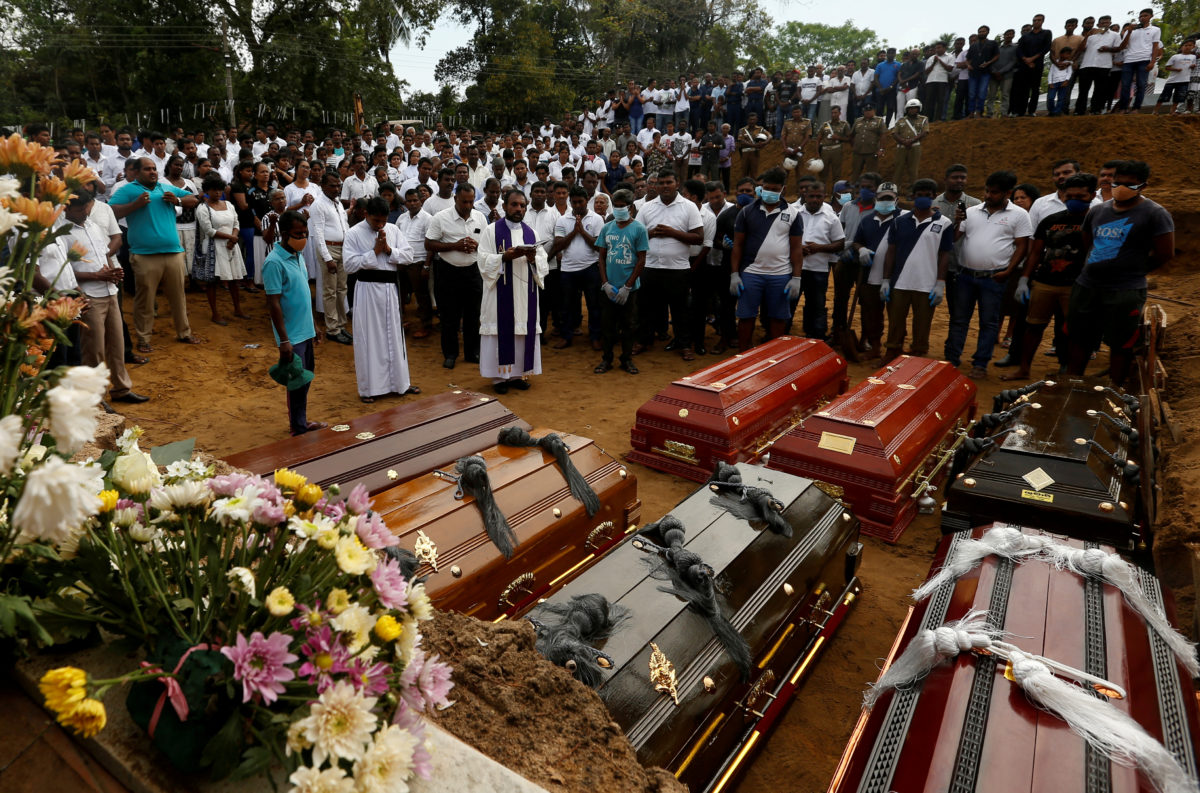 People participate in a mass funeral, of the seven victims belonging to one family, in Negombo, three days after a string of suicide bomb attacks on churches and luxury hotels across the island on Easter Sunday, in Sri Lanka April 24, 2019. Photo by Thomas Peter/Reuters

Earlier Friday, police confirmed the militant group’s leader, Mohamed Zahran, died in the suicide bombing at the Shangri-La Hotel, one of six hotels and churches attacked. Zahran appeared in an Islamic State video claiming responsibility for the coordinated assault, and authorities in both Sri Lanka and Australia confirmed links between IS and the attack.

Police said investigators had determined that the assailants’ military training was provided by someone they called “Army Mohideen,” and that weapons training had taken place overseas and at locations in Sri Lanka’s Eastern Province.

Police said they arrested the operator of a copper factory who had helped Mohideen make improvised explosive devices and purchase empty cartridges sold by the Sri Lankan military as scrap copper.

The discrepancy was not immediately explained, but it fit a pattern of confused reports by Sri Lankan officials that have muddled the investigation. On Friday, police apologized to a Brown University student and a human rights activist after they posted her picture to Twitter and erroneously identified her as a wanted militant. The police then deleted their Twitter account.

Left: A security officer stands guard outside St. Antony's Shrine, days after a string of suicide bomb attacks on churches and luxury hotels across the island on Easter Sunday, in Colombo, Sri Lanka April 26, 2019. Photo by Thomas Peter/Reuters