Tennis players take on Communist Party: Where is Peng Shuai?

Some of the world’s most famous tennis players, distraught by the disappearance of colleague Peng Shuai, are challenging China’s Communist Party to get answers.

Peng, a two-time Grand Slam champion and former No. 1 in doubles, disappeared after making allegations of sexual assault over two weeks ago against former vice premier Zhang Gaoli, who was a member of the all-powerful Politburo Standing Committee and a lieutenant of General Secretary Xi Jinping.

Athletes may sense a pressure point.

China is just 2 1/2 months from hosting the Beijing Winter Olympics, which is facing a diplomatic boycott over allegations of crimes against humanity involving at least 1 million Uyghur Muslims and other ethnic minorities. NBA player Enes Kanter has been the most outspoken in defense of the Uyghurs, calling Xi a “brutal dictator.”

Peng’s case is unique. She is a star athlete and has a platform and credibility that few other women in China share. The effort to silence Peng reflects the Communist Party’s determination to squelch criticism of its leaders and to prevent any organized public response.

Athletes are especially sensitive politically because they are well-known and admired. The ruling party publicizes their victories, especially those of a three-time Olympian such as Peng, as evidence it is making China strong again.

China’s Foreign Ministry has repeatedly disavowed any knowledge of the case. Ministry spokesperson Zhao Lijian told media on Friday the issue is “not a diplomatic question and I’m not aware of the situation.”

Peng wrote a lengthy social media post on Nov. 2 in which she said she was forced to have sex three years ago with Zhang. The post was quickly deleted from Peng’s verified account on Weibo, a leading Chinese social media platform. But screenshots of the explosive accusations were shared on the internet.

Athletes have been weighing in ever since. 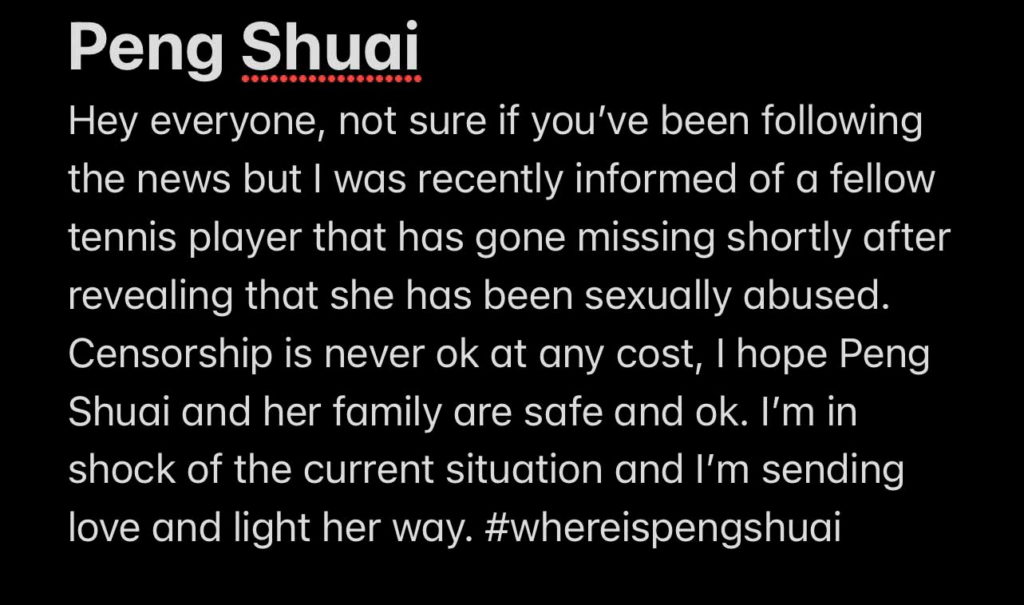 Naomi Osaka tweets to share her concerns on the whereabouts of Peng Shuai, who has not been heard from since making allegations of sexual assault against former Chinese vice premier Zhang Gaoli, November 16, 2021, in this screengrab obtained via social media on November 18, 2021. Naomi Osaka/Twitter via Reuters.

“She’s one of our tennis champions, a former world No. 1, and clearly it’s concerning. I hope she’s safe,” Federer told Sky Italia on Saturday. “The tennis family sticks together and I’ve always told my children as well that the tennis family is my second family. … I just want her to be OK and that she’s safe and that we hear something hopefully soon.”

Nadal told the French newspaper L’Equipe, “The most important thing is to find out whether she is OK. All of us in the tennis family hope to see her back with us soon.”

French tennis player Nicolas Mahut said he won’t play in China if the situation isn’t resolved, and he added that the International Olympic Committee needs to do more.

“It’s really embarrassing to not speak out. They should say something a few months before (the) Olympics in China,” Mahut said. “I hope they will do something soon.”

Players have been emboldened by the unequivocal support of the Women’s Tennis Association and its chairman and CEO Steve Simon, who has threatened to pull the WTA’s events out of China. That means almost a dozen next year, including the WTA final.

“There’s too many times in our world today when you get into issues like this that we let business, politics, money dictate what’s right and what’s wrong,” Simon said in an interview on CNN.

“And we’re definitely willing to pull our business and deal with all the complications that come with it because … this is bigger than the business.”

A statement from Wimbledon said the sport’s most prestigious tournament is “united with the rest of tennis in the need to understand that Peng Shuai is safe.”

“We have been working in support of the WTA’s efforts to establish her safety through our relationships behind the scenes,” the All England Club added.

U.S. Deputy Secretary of State Wendy Sherman tweeted: “We are deeply concerned by reports that tennis player Peng Shuai appears to be missing, and we join the calls for the PRC to provide independent, verifiable proof of her whereabouts. Women everywhere deserve to have reports of sexual assault taken seriously and investigated.”

Liz Throssell, a spokeswoman for the U.N. human rights office in Geneva, said Friday it was calling for “an investigation with full transparency into her allegation of sexual assault.”

Global Athlete, an advocacy group, has asked the Switzerland-based IOC to suspend the Chinese Olympic Committee until Peng’s safety is guaranteed.

“The IOC must use its substantial leverage to ensure that the international community is provided proof of Peng’s whereabouts,” Global Athlete head Rob Koehler said.

Despite Peng being a former Olympian, the IOC has remained quiet. A sports business, it derives 91% of its income from selling broadcast rights and sponsorships. But it prefers to cast itself as a non-government organization whose role is to defend high-minded ideas like “promoting a peaceful society concerned with the preservation of human dignity,” which appears in its Olympic Charter.

Emma Terho, the newly elected head of an IOC’s Athletes’ Commission that is supposed to represent the interests of Olympic athletes, has not commented. The IOC always says athletes are its first priority, but there is growing pressure from some athletes to get a larger slice of the IOC’s billion-dollar pie.

“Experience shows that quiet diplomacy offers the best opportunity to find a solution for questions of such nature,” the IOC said in a statement. “This explains why the IOC will not comment any further at this stage.”

It also said it has received assurances that Peng is “safe.”

The World Olympians Association declined to issue a statement. It claims to represent 100,000 living Olympians. It was founded by Juan Antonio Samaranch Jr., who heads the IOC preparations for the Beijing Olympics which begin Feb. 4. IOC President Thomas Bach is the honorary president.

“The IOC has more leverage than any other organization with the pending Winter Olympic Games,” Koehler of Global Athletes wrote to AP. “They need to use that now. Athletes going to these Games are watching how the IOC will protect athletes.”

Left: FILE PHOTO: A file photo of China’s Peng Shuai serving during a match at the Australian Open on January 15, 2019. Photo by Edgar Su/Reuters.