The campaign that changed how Americans saw the Vietnam War

The Tet Offensive began in stealth 50 years ago in Vietnam, but it ended up being splashed on television sets all over America. The North Vietnamese Army and Viet Cong assaults in cities across what was then South Vietnam would become a military defeat for the communists. But the political blast radius of the battle extended to Washington; it helped bring down the administration of President Lyndon Johnson, which had committed more than half a million American troops to defend the South Vietnamese government. Soon after, Tet would turn the course of the war towards an eventual American exit.

Like everything else about the decade-plus American war effort in Vietnam, Tet has been a focal point of controversy and heated arguments, both about the war and American media coverage. As the participants and chroniclers fade away, some of the heat has diminished but not totally gone away.

Like everything else about the decade-plus American war effort in Vietnam, Tet has been a focal point of controversy and heated arguments.

In the last two days of January 1968, the North Vietnamese army and its communist guerrilla allies in the South, the Viet Cong, launched attacks across the South during what was supposed to be the Asian lunar New Year holiday, known as “Tet” in Vietnam. Many South Vietnamese soldiers were away from their units, home with their families for the holiday.

The American command under Gen. William Westmoreland was caught by surprise. Westmoreland had told Congress — as recently as late November 1967 — that victory was in sight. Some of President Johnson’s top advisers had been even more upbeat: one told an American journalist en route to Vietnam to concentrate on covering civilian rebuilding programs because the military part of the effort was being wrapped up.

It was against this drum beat of official optimism that the communist attacks unfolded. The most dramatic was an assault on the compound of the U.S. Embassy in the South Vietnamese capital of Saigon. The attack was repelled but the consequences in the U.S. were devastating.

In his classic 1971 account, “Tet,” the author and journalist Don Oberdorfer described how the brief battle in Saigon was reported back to the U.S, in print and even more so on television. Teletype bulletins went out on the Associated Press and United Press International wire services. Television film footage of the assault was shipped by plane to Asian cities where it was processed and then transmitted by satellite to the New York headquarters of the three networks. Those pictures and words marked the beginning of the biggest media event of America’s first television war.

The pictures hit the American public and then the political scene in a presidential election campaign year more tellingly than the rockets and bullets at the embassy.

Indeed, much of Oberdorfer’s work focused on what he described then as the startling rapidity of the news cycle and transmission of information, a decade before cable television news and four decades before iPhones and Twitter.

Some later critiques, such as Peter Braestrup’s 1978 “Big Story,” faulted the press coverage for over-dramatizing what were small-scale battles that were characterized as major American defeats.

Oberdorfer, his contemporary Stanley Karnow, and more recently Mark Bowden in his “Hue 1968,” attach more importance to the context of the communists’ strike, rather than the specific battles or tone of the coverage.

What was important, they argue, was that the Johnson administration and Westmoreland had been promising a victory around the corner for so long, that the sight of enemy soldiers at the U.S. Embassy shocked and disillusioned the American public. Poll numbers began reflecting an erosion of support that had held up for three years of a growing American war, even as anti-war demonstrations increased in size and intensity in the U.S.

The political damage in the United States was devastating, and unfolded quickly.

Across most of South Vietnam, the communist attacks were quickly repulsed, cities and towns re-taken in days, killing tens of thousands of North Vietnamese and Viet Cong. The South Vietnamese government and army, shaken as they were, did not crumble as the communists had anticipated; indeed it momentarily gained new resolve.

One exception was the old imperial capital of Hue, where street fighting went on for a month, at the cost of more than 200 U.S. Marines and soldiers killed and more than 1,000 wounded to dislodge the communist occupiers.

As Oberdorfer wrote, Tet was a “grievous” military setback for the North, especially for its indigenous Viet Cong ally, which was basically eliminated as a fighting force for the duration of the war.

But the political damage in the United States was also devastating, and unfolded quickly. On Feb. 22, CBS anchorman Walter Cronkite, back from a reporting trip to Vietnam, pronounced the war a stalemate and said it was time to negotiate an end. Historians and Johnson associates are still at odds whether the president declared at that point that losing Cronkite meant losing Middle America. 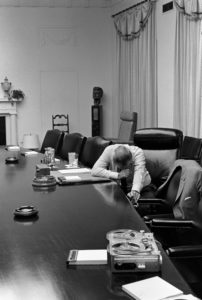 In mid-March, in conservative New Hampshire, insurgent Democratic presidential challenger Sen. Eugene McCarthy won 42 percent of the primary vote. Within days, Sen. Robert F. Kennedy joined the Democratic challenge to President Johnson. As a young reporter, I was back in the Senate Caucus Room where I (then a high school copy boy at the old Washington Star) had watched his brother John F. Kennedy declare his candidacy in 1960. Then on March 31, President Johnson dropped his own political bombshell. In a Sunday night television address, the president rejected Westmoreland’s call for a massive troop buildup, ordered a pause in the bombing of North Vietnam, called for a negotiation and concluded by saying he was bowing out of the re-election race.

Like other stunned reporters in Washington, I leaped off my sofa into action, calling Pennsylvania congressmen and senators for a reaction story for the Harrisburg Patriot. I reached enough of them at their homes to dictate a story to Harrisburg that landed on the Monday front page, now framed in my apartment. Two days later I was traveling with Kennedy, who was mobbed by crowds in downtown Philadelphia. And two days after that, on April 4, while covering a Democratic congressional fundraising dinner in Washington, the word began to spread that Martin Luther King Jr. had been shot in Memphis. It took what seemed like an eternity for the band to stop playing and the chairman to send everyone home — to a city already beginning to burn.

The year 1968 was one of turmoil and assassinations across the United States and overseas as well; student rebellions in Paris and West Berlin; and Soviet troops crushing an experiment in liberal communism in Czechoslovakia. It ended with the election of Richard M. Nixon as president of the United States and a spacecraft circling the moon as American astronauts invoked Scripture.

It all began with a series of surprise attacks across the nation of South Vietnam to be remembered with the one, now-freighted Vietnamese name: Tet.

Left: U.S. Marines in Hue, Vietnam, lie in wait on roadside with an M-60 machine gun behind a bullet-pocked tree, Feb. 3, 1968. Photo by Bettmann/Getty Images