JOHANNESBURG — Thousands of people protested in Mauritius again Saturday over the government’s handling of an offshore oil spill that has become the Indian Ocean island nation’s worst environmental disaster in years.

New details indicate the Japanese ship that struck a coral reef in late July and leaked some 1,000 tons of fuel oil near protected coastal areas had strayed miles off course because the captain wanted to move closer to shore so crew members could get a mobile phone signal to call their families.

“The change of course could be related to the birthday celebration of one of the crew members,” said a report this week by the maritime authority of Panama, where the MV Wakashio is registered. It said preliminary investigations also suggested that a navigation system and a nautical chart were mishandled.

Last month, nearly one-tenth of the population of Mauritius marched peacefully in the capital, Port Louis, expressing outrage over the disaster and the discovery of dozens of dead dolphins weeks after the spill. 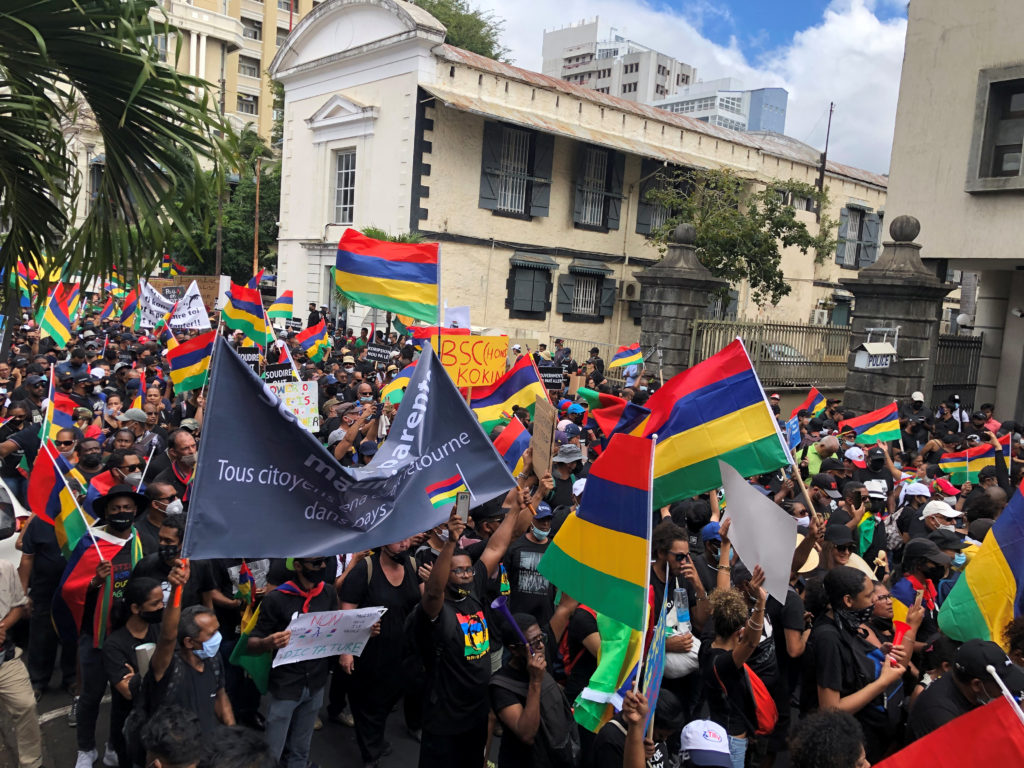 People attend a demonstration to demand an investigation into an oil spill from a Japanese ship, in Port Louis, Mauritius August 29, 2020, in this picture obtained from social media. Photo by Hans Iyempermall/Reuters.

It is not immediately clear what killed the dolphins, but some experts say water-soluble chemicals in the fuel might have been to blame. The government has called it a “sad coincidence.”

Protesters have called for top officials to step down. Saturday’s march took place in Mahebourg, one of the most affected coastal villages.

The island nation of 1.3 million people relies heavily on tourism and already had taken a severe hit due to travel restrictions during the coronavirus pandemic.

On Friday, the Japanese operator of the bulk carrier said it will provide 1 billion yen ($9 million) to fund environmental projects and support the local fishing community. Mitsui O.S.K. Lines said the Mauritius Natural Environment Recovery Fund will be used for mangrove protection, coral reef recovery, protection of seabirds and rare species, and research by private and governmental groups.

Mauritius has said it is seeking compensation for the damage from Nagashiki.

Left: A water jerrycan is seen on oil spilled from the bulk carrier ship MV Wakashio, belonging to a Japanese company but Panamanian-flagged, that ran aground on a reef, at the Mahebourg Waterfront in Riviere des Creoles, Mauritius, August 12, 2020. Photo by Stephane Antoine/Reuters.