Trial of Catalan separatists begins in Madrid amid protests

MADRID — A politically charged trial of a dozen Catalan separatist leaders got underway Tuesday in Spain’s Supreme Court amid protests and the possibility of an early general election being called in the country.

The defendants are being tried on rebellion and other charges stemming from their roles in pushing ahead with a unilateral independence declaration in October 2017. The declaration was based on the results of a divisive secession referendum that ignored a constitutional ban.

The trial, arguably Spain’s most important in four decades of democracy, began as the future of Prime Minister Pedro Sanchez’s minority government hinges on last-minute negotiations with Catalan pro-independence parties to back his 2019 budget.

Sanchez could be forced to call an early election if the Catalan separatists, whose support brought the Socialists to power last year, don’t change their current position of voting against his spending plan on Wednesday.

The separatists want Sanchez to agree to talks on self-determination for their region, but the government argues that Spain’s constitution doesn’t allow it. 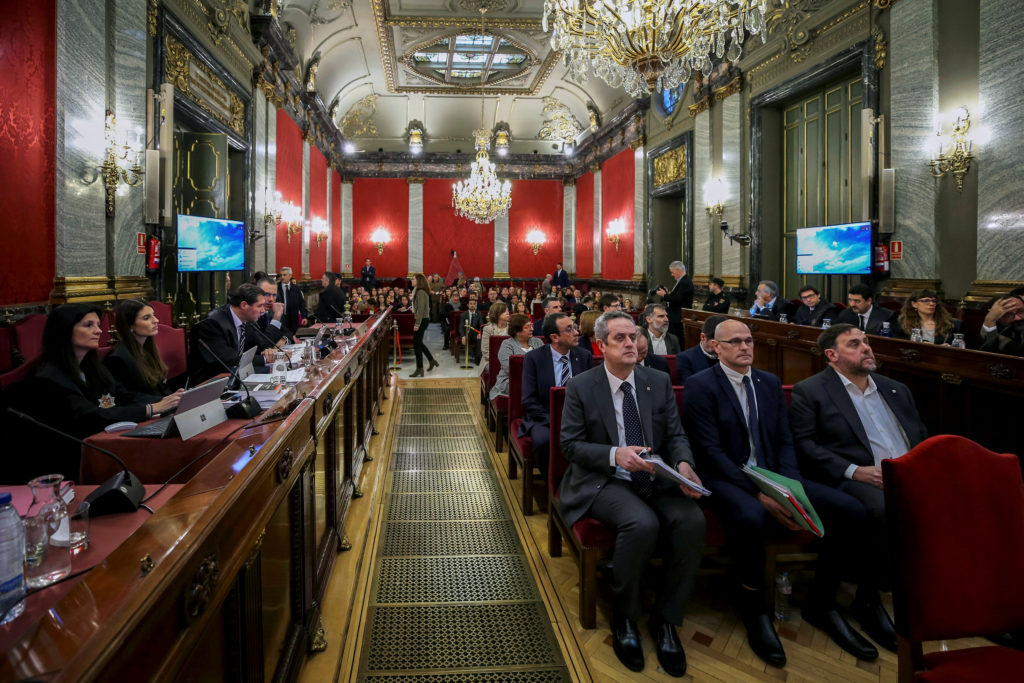 A general view shows the trial of Catalan separatist leaders at Supreme Court in Madrid, Spain. Photo by Emilio Naranjo/Reuters

Opening the parliamentary debate on Tuesday, Spanish Budget Minister Maria Jesus Montero told Catalan lawmakers that the government would “not give in to any blackmail by anybody.”

“Under no circumstance will we agree to include the right to self-determination in Catalonia in any talking points,” she said.

Meanwhile, Sanchez appeared to put more pressure on his opponents by tweeting that “the right-wing and the separatists will vote against a budget that helps social causes.”

Tensions between regional and central authorities peaked with the 2017 breakaway attempt but the conflict has been festering ever since. The 7.5 million residents of Catalonia remain divided by the secession question.

On Tuesday, pro-independence protesters briefly blocked highways in the northeastern region and roads in its capital. A sit-down demonstration outside the Barcelona office of the state prosecutor was cleared by the regional police without incident.

Former Catalan Vice President Oriol Junqueras, the regional parliament’s former Speaker Carme Forcadell and the other 10 defendants weren’t expected to testify Tuesday, but they sat on four benches in the middle of the courtroom.

Holding papers in their hands and smiling to each other at times, the defendants sat facing a seven-judge panel headed by Supreme Court magistrate Manuel Marchena, who moderates the proceedings.

Junqueras’ lawyer, Andreu Van Den Eynde, was the first to speak, arguing that the cause goes “against political dissidence.”

“We are before an exceptional trial,” he told the judges, adding that “self-determination is the formula to avoid conflicts in the world.”

Catalan President Quim Torra, a fervent separatist who has had to apologize for anti-Spanish comments, followed the proceedings from the back of the courtroom, where 100 seats were reserved for the defendants’ relatives, journalists and members of the public who lined up for hours to get one of the limited spots.

Among those not on trial is Carles Puigdemont, Torra’s predecessor who fled Spain. He called for the 12 separatists to be absolved for their alleged crimes and called the trial “a stress test for the Spanish democracy.”

Addressing reporters at a news conference in Berlin, the former Catalan leader added: “I trust, however, that the Spanish state will take advantage of this chance to issue the correct sentence, which is absolution.”

Puigdemont successfully avoided extradition to Spain when a German court refused to send him back on charges of rebellion last year.

Those who stayed behind and showed up in court are the ones facing trial. Junqueras, Puigdemont’s No. 2 at the time, faces up to 25 in prison if found guilty of rebellion, while others charged with sedition or misuse of public funds could get shorter sentences if convicted.

The proceedings were broadcast live on television in a display of transparency that aims to fight the separatists’ attack on the court’s credibility. Authorities in Spain have dismissed the notion that the trial is political and say it follows the Europe Union’s highest standards.

Proceedings were likely to last for at least three months. The verdicts, and any sentences, will be delivered months later.

Left: A Catalan separatist flag is pictured during a protest in front of the European Commission headquarters in Brussels, Belgium. Photo by Francois Lenoir/Reuters