HOUSTON — Deafening drums marked the entrance of President Donald Trump and Indian Prime Minster Narendra Modi as they clasped hands and walked across the stage in a packed Texas stadium Sunday, sending a message of unity between the world’s two largest democracies despite trade tensions.

Instead of dwelling on trade, Trump highlighted the growth of U.S. exports to India, the billions of dollars India is spending on U.S.-made defense equipment and joint military exercises with New Delhi.

“India has never invested in the United States like it is doing today,” Trump said, adding that “we’re doing the same thing in India.”

The president also discussed border security, an important campaign issue for Texas, which shares a border with Mexico.

“We are taking unprecedented action to secure our southern border and stop illegal immigration,” Trump said. 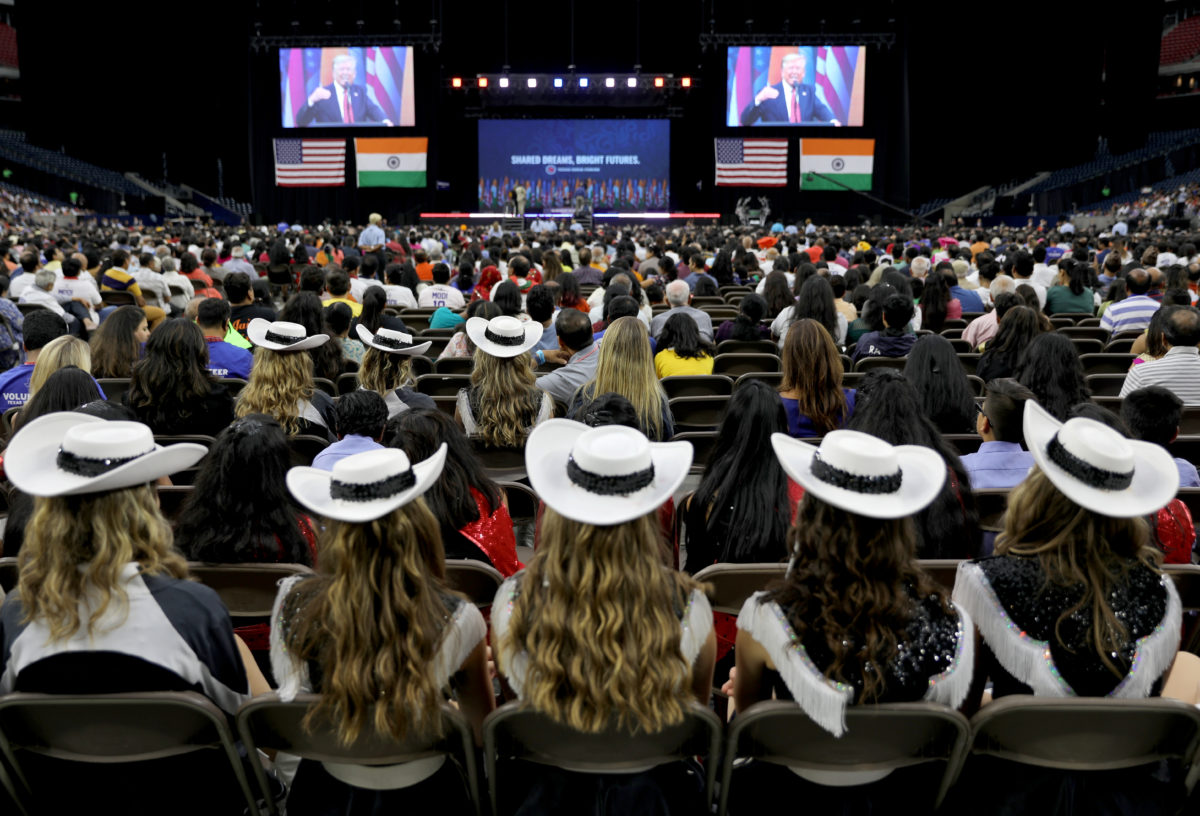 About 50,000 Indian Americans attended the “Howdy Modi!” rally in Houston, where the crowd chanted “Modi! Modi! Modi!” as he took the stage to introduce Trump as “my friend, a friend of India, a great American president.”

Modi even used Trump’s political slogan to say the president had a strong resolve to “make America great again.”

“When I met him for the first time, he said to me ‘India has a true friend in the White House,'” Modi said. “Mr. President, this morning in Houston, you can hear the heartbeat of this great partnership in this celebration of the world’s two largest democracies.”

Trump said Modi invited him to the rally – one of the largest U.S. gatherings of the Indian diaspora in history – when they met last month in France, and Trump told reporters Sunday that “I love India,” explaining his decision to attend. Sunday marked their third meeting in as many months and their first time together on stage. The leaders, who seem to have developed a rapport, are to meet again Tuesday on the sidelines of the U.N. General Assembly.

Modi, 68, won the biggest re-election India has seen in years after some 600 million Indians cast ballots across the country earlier this year.

At the U.N., Trump also scheduled a meeting with Pakistani leader Imran Khan, who told the president recently that he would welcome his help mediating the Pakistan-India conflict over Kashmir. India’s government has stripped the disputed Himalayan region of its semi-autonomy and launched a security crackdown last month.

Trump said U.S.-India bonds are expanding, but tensions over India’s trade surplus with the U.S. are simmering. In June, the U.S. canceled India’s special trade privileges that had allowed India to export certain goods with lower tariffs. India responded by slapping tariffs on more than two dozen U.S. goods.

The U.S. and India are discussing ways to negotiate at least a partial trade deal, which would let the president score a victory as he campaigns for re-election in November 2020. A partial deal could include Washington reinstating India’s special tariff status if New Delhi gives the U.S. concessions related to access to Indian markets, possibly in dairy and medical devices.

Several unresolved issues are thwarting efforts to sign a larger deal. The U.S. wants India to buy more American products to reduce its trade surplus with the United States, which today is some $24 billion a year.

After the Houston event, Trump was traveling to Ohio, a key state for him in the 2020 presidential race. He and Australian Prime Minister Scott Morrison are to mark the opening of an Australian-owned Pratt Industries plant in Wapakoneta. Trump hosted Morrison and his wife, Jenny, on a state visit last week.

In Texas, Trump was briefed on recent flooding in the southeastern part of the state during a visit to a nearby U.S. Coast Guard station.

Hundreds of homes and other buildings across a region extending eastward from Houston and across the Louisiana border, were damaged by Imelda, as the one-time tropical storm slowly churned across the Gulf region, dumping more than 40 inches (102 centimeters) of rain in some areas.

Authorities blamed the storm for at least five deaths.

“This was a really bad one,” Trump said about Imelda. The president spoke with Federal Emergency Management Agency officials at the Coast Guard hangar, and said the federal government was giving Texas money and equipment to help with recovery operations.

“My administration will not rest until you have fully recovered, restored and rebuilt,” he said, addressing Texas residents at the rally.

Trump will spend most of next week in New York to participate in the annual U.N. General Assembly .