“That was a tremendous day, tremendous investments in the United States,” Trump said during a meeting with Crown Prince Mohammed bin Nayef.

The visit to the kingdom’s capital kicked off Trump’s first foreign trip as president, an ambitious, five-stop swing that will take him through the Middle East and into Europe. He is the only American president to make Saudi Arabia — or any Muslim-majority nation — his first overseas trip.

Trump arrived in Riyadh besieged by the fallout from his firing of FBI Director James Comey and more revelations about the federal investigations into his election campaign’s possible ties to Russia. Escaping Washington for the embrace of the Saudi royal family appeared to give Trump a boost.

After an overnight flight, the president was greeted at the airport by King Salman, which was notable given that the monarch did not show up last year to welcome President Barack Obama on his final visit to Saudi Arabia.

Trump descended the steps alongside first lady Melania Trump, who wore a black pantsuit and gold belt, but did not cover her hair in the ultra-conservative kingdom, in keeping with the traditions of Western delegations. 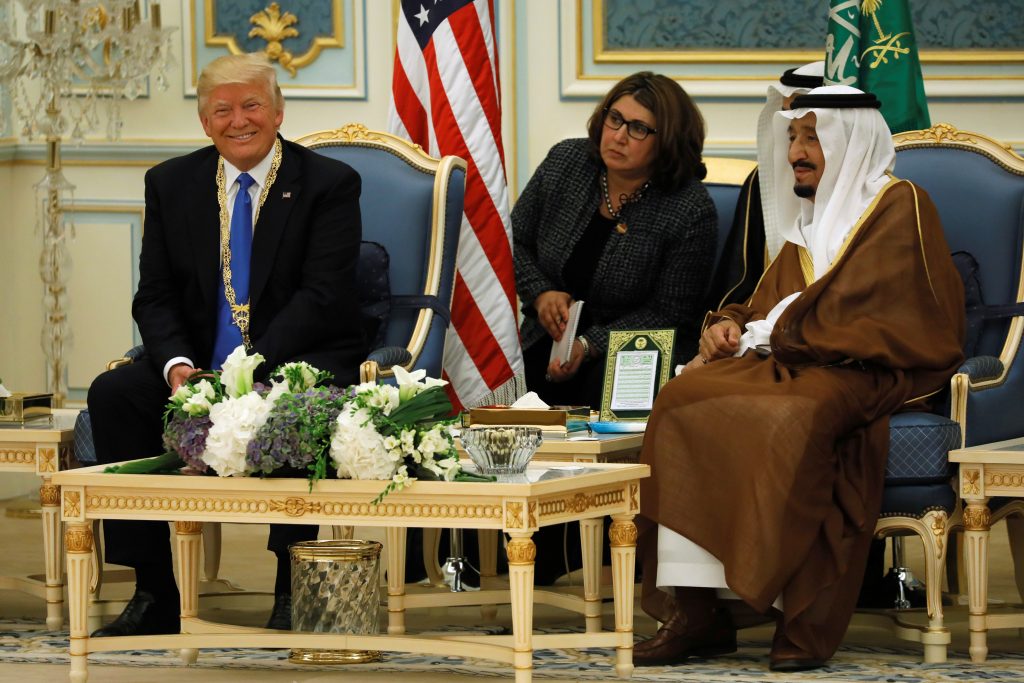 As Trump and the 81-year-old king, who was aided by a cane, walked along the red carpet, military jets flew swept the sky, leaving a red, white and blue trail. During a ceremony at the grand Saudi Royal Court, Salman awarded Trump the Collar of Abdulaziz al Saud, the kingdom’s highest civilian honor.

Trump bent down so the king could place the gold medal around his neck. Saudi Arabia has previously bestowed the honor on Russian President Vladimir Putin, British Prime Minister Theresa May and Obama.

Trump’s warm welcome reflected the degree to which Saudi Arabia had become disillusioned with Obama. The Saudis deeply distrusted Obama’s overtures to Iran and were frustrated by his restrained approach to the Syrian civil war.

As Trump arrived, Iranians had just re-elected Hassan Rouhani — one of Obama’s partners in the landmark accord aimed at curbing Tehran’s nuclear ambitions — for a second four-year-term as president, validating his push for greater freedoms and outreach to the wider world. U.S. Secretary of State Rex Tillerson said he hoped Rouhani would use his new term “to begin a process of dismantling Iran’s network of terrorism.”

Trump made no substantial remarks on his first day abroad and spent most of his time shuttling between opulent palace ballrooms with the king. The two were overheard discussing natural resources and arms, and Salman bemoaned the destruction caused by Syria’s civil war.

The most tangible agreement between the two leaders was the $110 billion sale of military equipment to Saudi Arabia that is effective immediately and could expand up to $350 billion over 10 years. The deal includes tanks, combat ships, missile defense systems, radar and communications, and cybersecurity technology. The State Department said the agreement could support “tens of thousands of new jobs in the United States.”

Trump was joined on the trip by the CEOs of several major U.S. companies, which announced their own agreements with the Saudis. Among them was a $15 billion arrangement with GE focused on power, oil and gas, and health care.

The president was trailed on the trip by a large number of advisers, including Tillerson, chief of staff Reince Priebus and chief strategist Steve Bannon. Trump’s son-in law, Jared Kushner, and daughter Ivanka, both senior advisers, were also part of the official delegation.

Later Saturday, Trump was greeted by a traditional troupe of Saudi drummers and sword-waving dancers. Trump smirked and bopped to the beat as he made his way through the crowd.

On Sunday, Trump and the king were to join more than 50 regional leaders for meetings focused on combating the Islamic State group and other extremists. The president was to give the signature speech of his trip, an address that aides view as counter to Obama’s 2009 speech in Egypt to the Muslim world. Trump has criticized Obama’s remarks as too apologetic for U.S. actions in the region.

Trump planned to urge unity in the fight against radicalism in the Muslim world, casting the challenge as a “battle between good and evil” and appealing to Arab leaders to “drive out the terrorists from your places of worship,” according to a draft of the speech obtained by The Associated Press.

The draft also notably did not contain the words “radical Islamic terror,” a phrase Trump repeatedly criticized his 2016 president rival, Democrat Hillary Clinton, for not using during last year’s campaign.

After two days of meetings in Saudi Arabia, Trump was scheduled to travel to Israel, meet with Pope Francis at the Vatican, and attend a NATO summit in Brussels and join the world’s major industrial nations at a Group of Seven gathering in Sicily.