ISTANBUL — Saudi Arabia must identify those who ordered the murder of journalist Jamal Khashoggi and turn over the suspects for trial, the Turkish president said Tuesday in remarks that carefully ratcheted up pressure on a country that is a source of investment for Turkey, but also a rival for influence in the Middle East.

President Recep Tayyip Erdogan delivered a sharp rebuttal of Saudi Arabia’s widely criticized account that the writer for The Washington Post died accidentally in a brawl, saying Saudi officials had planned the killing for days.

Some analysts believe Turkey is also calculating whether it can capitalize on outrage over the killing to extract political capital from the world’s largest oil exporter without alienating it altogether.

Addressing ruling party lawmakers in parliament, Erdogan used the word “murder” 15 times to describe Khashoggi’s death after the writer entered the Saudi Consulate in Istanbul on Oct. 2 for paperwork related to his marriage plans.

Erdogan also cast Turkey in the role of global statesman, echoing calls for full Saudi accountability from Western allies whose relationships with the Turkish government have often been edgy in the past.

“To blame such an incident on a handful of security and intelligence members would not satisfy us or the international community,” he said. Earlier, Turkey’s foreign minister said it would cooperate with any international or U.N. probe into the killing, a nod to transparency that only seemed to accentuate an emerging pariah status for Saudi Arabia.

U.N. Secretary-General Antonio Guterres stood by his earlier call for an independent and transparent investigation, said Farhan Haq, a deputy spokesman for the world body. Haq reiterated that Guterres can initiate a probe if key parties request it or if there is a legislative mandate from a U.N. body.

“Turkey is playing the long game. And today’s speech is part of a very careful — in my opinion — escalation strategy,” said Ahmet Kasim Han, an international relations analyst at Altinbas University in Istanbul.

“Turkish authorities seem to be concentrated on turning this into a multilateral issue” because they don’t want “to be left alone with Saudi Arabia on all of this,” he said.

Maha Yahya, director of the Carnegie Middle East Center in Beirut, speculated that Saudi Arabia could now be vulnerable to pressure, including from the U.S., to end a boycott of Turkey-backed Qatar.

“As far as Erdogan is concerned, he will use this incident to try and get as much mileage and concessions out of it, to the advantage of Turkey, as he possibly can,” Yahya said.

Erdogan focused on the investigation in his speech, saying he wants the 18 suspects detained by Saudi Arabia in the killing to face trial in Turkish courts, a demand the kingdom will probably resist. Saudi Arabia has said it will punish those involved and has described the suspects as rogue operators, even though officials linked to Saudi Arabia’s assertive Crown Prince Mohammed bin Salman have been implicated.

Although he didn’t mention Prince Mohammed, Erdogan likely knows that the kingdom’s major decisions always require the approval of those at the top of the ruling Al Saud family.

“As of now, we expect of them to openly bring to light those responsible — from the highest ranked to the lowest — and to bring them to justice,” the Turkish president said.

Han, the Istanbul analyst, said Erdogan is moving cautiously, wary that Prince Mohammed might stay in control despite the scandal or could succumb to pressure over the Khashoggi killing and relinquish power. The latter outcome would benefit Turkey because the crown prince “is consciously and continuously pursuing strategies that work against Turkey,” Han said.

Modern tensions between the two countries date to the Arab Spring uprisings in 2011. Turkey supported some political Islamists who rose to power, but Saudi Arabia and its ally, the United Arab Emirates, viewed the pan-Arab Sunni movement as a threat to their hereditarily ruled nations.

Another opportunity emerging from the fallout over Khashoggi’s death could be an improvement in ties with the U.S. after Washington imposed sanctions on Ankara over the jailing of a U.S. pastor, said Marc Pierini, a former European Union diplomat to Turkey.

At an event hosted by The Washington Post, U.S. Vice President Mike Pence said Khashoggi’s death was a “brutal murder” and “will not go without an American response.”

He declined to say whether he had seen any intelligence linking the crown prince to the killing, noting that CIA Director Gina Haspel was in Turkey, and added: “I know that when the CIA director returns, she will be briefing the president, myself and our entire team on what the Turks have assembled.”

President Donald Trump has said he’s not satisfied with the explanations he’s heard from Saudi Arabia, seen as a key ally in U.S. efforts to isolate Iran.

The foreign ministers of the G7 group of nations said Saudi Arabia should conduct a credible investigation, “in full collaboration with the Turkish authorities.”

Confirming reports and leaks from anonymous officials in past days, Erdogan said 15 Saudi officials arrived in Istanbul shortly before Khashoggi’s death and that a man, apparently dressed in the writer’s clothes, acted as a possible decoy by walking out of the consulate on the day of the disappearance.

“Why did these 15 people all with links to the event gather in Istanbul on the day of the murder? We are seeking answers. Who did these people get their orders from to go there? We are seeking answers,” Erdogan said. “When the murder is so clear, why were so many inconsistent statements made? Why is the body of a person who has officially been accepted as killed still not around?” 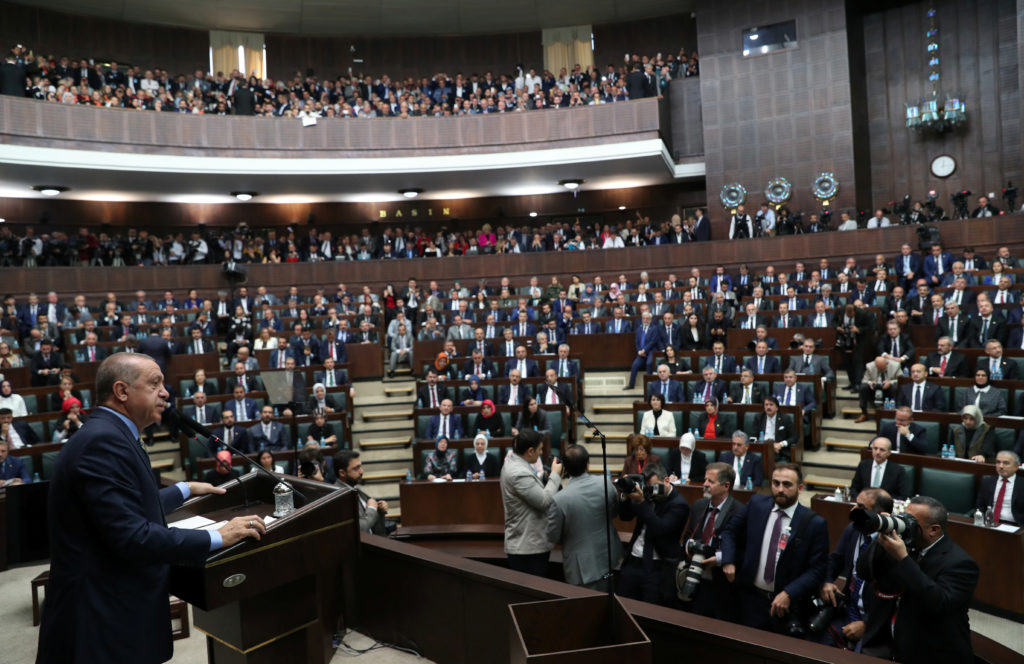 Turkish investigators, meanwhile, inspected a car belonging to the consulate and found three suitcases, a laptop computer and clothes inside, state television TRT reported. Authorities discovered the car at an underground garage on Monday.

In Riyadh on Tuesday, King Salman and Prince Mohammed received Khashoggi’s son, Salah, and his brother, Sahel, at the Yamama Palace, where the royals expressed their condolences. A friend of the Khashoggi family told The Associated Press that Salah has been under a travel ban since last year. The individual spoke on condition of anonymity, fearing reprisal.

At a Cabinet meeting, King Salman again stressed those responsible for Khashoggi’s slaying would be held “accountable,” according to the state-run Saudi Press Agency.

Also Tuesday, the crown prince attended an investment forum alongside King Abdullah II of Jordan. Prince Mohammed sat in on an afternoon session and looked at some promotional booths outside the main hall as an excited crowd of mostly young Saudi men recorded the encounter on their phones.

Many Western executives and officials skipped the conference because of the killing.

“As we all know, these are difficult days for us in the kingdom of Saudi Arabia,” he said. “Nobody in the kingdom can justify it or explain it. From the leadership on down, we’re very upset of what has happened.”