UK votes in election that aims to break Brexit deadlock

LONDON (AP) — Britons who have endured three years of wrangling over their country’s messy divorce from the European Union cast ballots Thursday in an election billed as a way out of the Brexit stalemate and one of the deeply divided country’s most important votes since World War II.

The contest pits Prime Minister Boris Johnson, who says he will take Britain out of the EU by Jan. 31, against opposition leader Jeremy Corbyn, who promises another referendum on Brexit.

All 650 seats in the House of Commons are up for grabs in the election, which is being held more than two years ahead of schedule.

At a fish market in the eastern port of Grimsby, seafood company owner Nathan Godley summed up the hopes of many people that — one way or another — the election would provide a pathway to a resolution of Brexit.

“I think we all got a bit weary of the politicians over the last few years really and I think having a government with a majority to give them the clout to actually do what they want is a good thing,” he said.

Johnson voted at Methodist Central Hall in London, accompanied by his dog, Dilyn. Corbyn was greeted by supporters and an activist dressed as Elmo from “Sesame Street”as he arrived to vote in his north London constituency.

WATCH: Ahead of election, British voters grapple with Brexit, division and distrust

“Every election is a climate election. Vote for your children. Vote for the planet. Vote for future generations. Vote for humanity,” Thunberg tweeted the day after Time magazine selected her as its youngest ever Person of the Year.

With so much at stake, political parties have pushed the boundaries of truth, transparency and reality during five weeks of campaigning.

Johnson’s Conservative Party was criticized for using misleading tactics on social media, while Corbyn’s Labour Party promised to tax the rich, boost government spending and nationalize industries such as railroads and water companies. One of the focal points of the ugly campaign was the National Health Service, a deeply respected institution that has struggled to meet rising demand after nine years of austerity under Conservative-led governments.

Jill Rutter, a senior research fellow at UK in a Changing Europe, said one of the things that stood out during the campaign was the shamelessness of the politicians. She cited Johnson’s claim that the Conservatives would build 40 hospitals, when that number really includes many existing facilities to be renovated.

“Normally, if you point out to people that something doesn’t stand up, it’s actually sort of fiction, you slightly expect them to start … replacing that with a different new fact,” Rutter said. “But here, actually, you’ve seen this from No. 10 under Johnson that they’re prepared to run a deeply manipulative operation.’’ 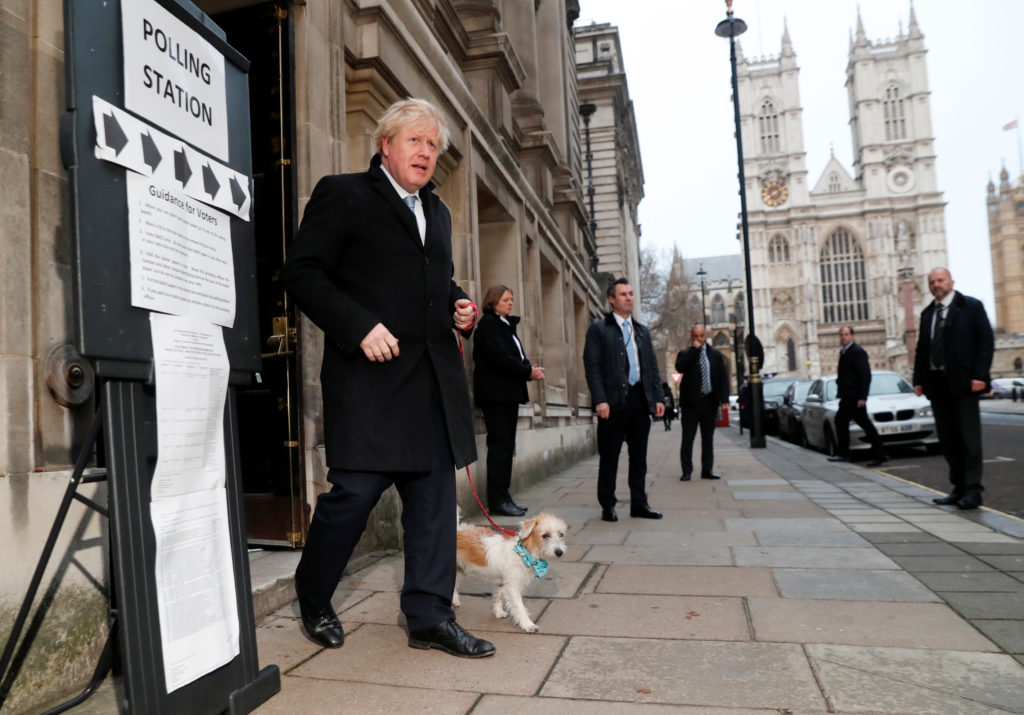 Britain’s Prime Minister Boris Johnson leaves with dog Dilyn at a polling station, at the Methodist Central Hall, after voting in the general election in London, Britain, December 12, 2019. Photo by Thomas Mukoya/Reuters

The prime minister called early elections in hopes of breaking a logjam in Parliament that stalled approval of his Brexit agreement in October. Johnson didn’t have a majority in the last Parliament and was stymied once he lost the support of the Democratic Unionist Party because of concerns about how Northern Ireland would be treated under his deal with the EU.

Opinion polls have consistently showed the Conservative Party in the lead, but recent surveys suggest the margin may have narrowed in the final days of campaigning. While Labour is unlikely to win an outright majority, smaller opposition parties hope to win enough seats so they can team up to block Johnson’s Brexit plans.

All of the parties are nervous about the verdict of voters who are more willing to abandon long-held party loyalties after three years of wrangling over Brexit. Photos of lines at polling stations suggested a brisk early turnout.

Chris Schofield said more than 70 voters were waiting in the Bermondsey and Old Southwark constituency in London.

“It’s about 20 times busier than it was in 2017, and for the locals and Euro elections,” the 27-year-old consultant told the Press Association news agency. “Atmosphere is very London: orderly queueing and no-one is talking to each other!”

In Glasgow, Simon MacFarlane, a 49-year-old trade union worker, said the election was about more than just Brexit.

“The issues facing the poorest people in Glasgow are no different from the poorest people in Liverpool, Manchester, or elsewhere around the whole of the country and Belfast,” he said. “So, we need to tackle those issues. We have had enough of constitutional politics at this point in time.”

The Conservatives have focused much of their energy on trying to win in a “red wall” of working-class towns in central and northern England that have elected Labour lawmakers for decades but also voted strongly in 2016 to leave the EU. Polls suggest that plan may be working, and the Conservatives also have been helped by the Brexit Party led by Nigel Farage, which decided at the last minute not to contest 317 Conservative-held seats to avoid splitting the pro-Brexit vote.

Labour, which is largely but ambiguously pro-EU, faces competition for anti-Brexit voters from the centrist Liberal Democrats, Scottish and Welsh nationalist parties, and the Greens.

One of the campaign’s defining images was a photo of a sick 4-year-old boy sleeping on a hospital floor because no beds were available. Johnson’s initial failure to even look at the photo in an on-camera interview put him on the defensive, portraying him as being insensitive to the child’s plight.

The photo, initially published by the Yorkshire Evening Post, swept across social media like a firestorm, injecting an explosive jolt into the political war of information in the final days of the campaign.

Social media platforms were a critical battleground, with political mudslingers waging a cyberwar with few legal constraints after the government failed to act on calls for a new law to protect democracy in the internet age. Just two years after Britain found itself at the epicenter of a global scandal over the misuse of Facebook data by political campaigns, the parties bombarded voters with social media messages — many of which were misleading. 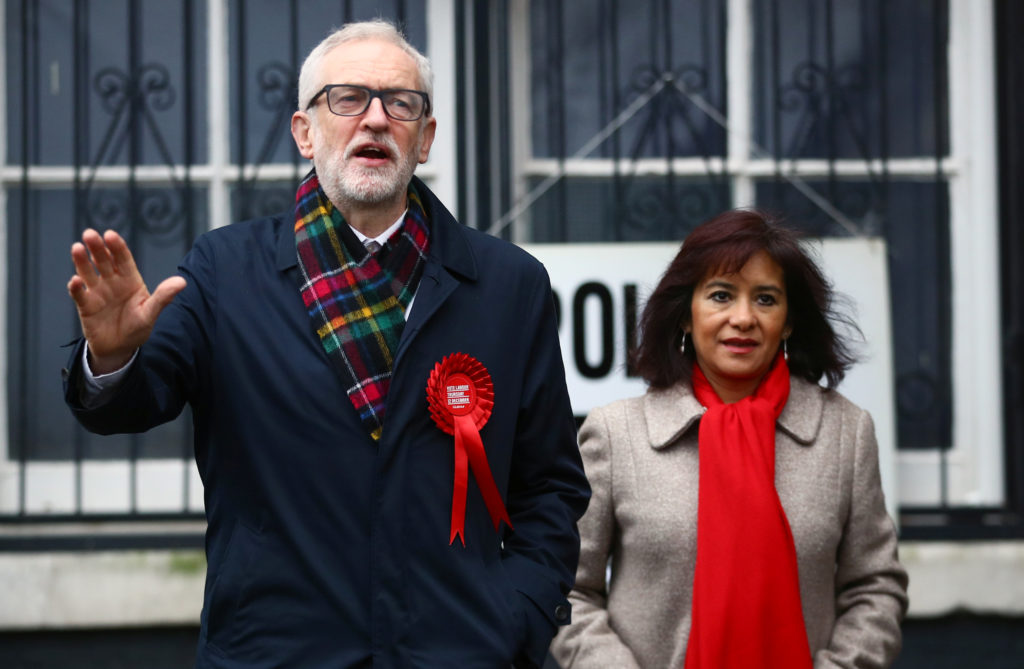 The Conservative Party circulated a doctored video that made it look as if an opposition leader had been stumped when asked about his position on Brexit. Then during a TV debate, the party re-branded its press office Twitter account as a fact-checking service. Labour also sought to co-opt the roll of independent fact-checker, rolling out a website called The Insider, which urged voters to “trust the facts.”

The Conservative Party, with a dynamic online campaign, found itself in the cross hairs of many media critics. Some, such as Rasmus Kleis Nielsen, director of the Reuters Institute for the Study of Journalism at the University of Oxford, wondered why Johnson, who has been in the lead, would feel compelled to push the edge of accepted norms.

“This is a governing party. It’s a mainstream party. It’s a career politician. This is not an outlier. You don’t get more establishment than the British Conservative Party,” Nielsen said. “If that is what they see as fit and proper, we must confront the fact that this is the new normal.”

Matthew Goodwin, a visiting senior fellow at the Chatham House think tank, said the Conservative Party’s tactics were partly motivated by alarm over the potential for a Corbyn-led government.

“We have to remember this is probably the most consequential election we’ve had in the postwar period,” he said.

Andre Backner, a 34-year-old insurance broker in London, summed up the national mood.

Left: A woman walks past a polling station during the general election The Hove Museum and Art Gallery in Hove, Brighton and Hove, Britain, December 12, 2019. Photo by Paul Childs/Reuters